Suppose that a light wave strikes the eyes of a driver. Assuming there is no colour blindness or other physical defect, the retina converts this stimulus into a set of neural impulses that the brain receives and categorizes relative to similar impulses received in the past. In this case, the red light in perceived as a traffic light, which, in turn, means the driver must exercise a behavioural pattern that is stopping the car.

Although the basic sensory level is often taken for granted, it should not be—the physiological mechanisms for converting physical stimuli to neural impulses are not perfect. Each sensory receptor has limitations and imperfections that can affect how neural impulses are received and transmitted.

No advertisement can be properly perceived if the basic sensations are faulty. Knowledge of a number of principles related to sensations can improve the preparation and presentation of advertisements. Analysis of advertising effects at the sensory level is shown in the Fig. 12.1. 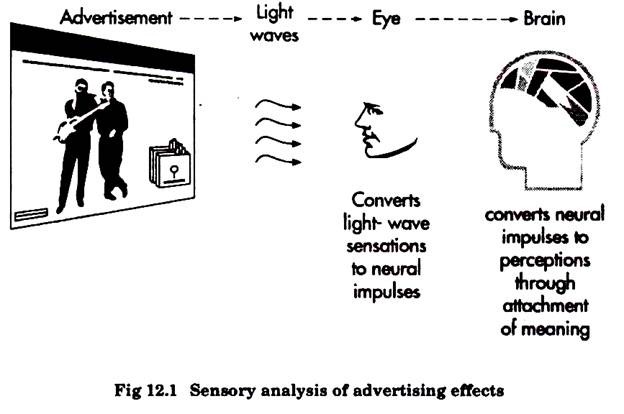 The cognitive level of analysis begins with perception and its relation to other variables, such as attention, motivation, learning and memory. What people perceive relates to the extent they are paying attention to various stimuli.

What they remember is a function of the importance they attach to what they see (or hear, feel, smell, taste). Importance is dependent on their wants, needs, and motivations and the degree they have learned that the stimuli presented can play a part in satisfying their wants.

Behavioural effects of advertising at the personal level consider the whole man. Reactions to advertisements are analyzed in relation to different kinds of people. At this stage we are concerned with such variables as personality, sex, age, and self-image. In addition to measures of perception effects, we are also concerned with measures of attitudes and purchase behaviour.

Here we begin to analyse the principles used in communicating between individuals. This includes the study of linguistics, message transmission, and elements of mass communication. These factors lie in the social psychologists field of interest and overlap to some extent the factors of concern to sociologists, which is described at the next level of analysis. The paradigm for the personal level of analysis is shown in Fig. 12.3.

The analysis of advertising at this level involves the influences of groups. Each family, social group, society and culture responds to advertising in particular ways. The role, status and relationship of a member to a group can influence the kind of advertising that should be transmitted.

For example, children have varying degrees of influence on purchase decisions, and consumers purchase products that help them project favourable images about themselves to their friends and associates.