The advertising budget is primarily a blue print of a projected advertising plan of action by an organisation for a definite period of time. Its fundamental purpose is to aid in securing control over advertising and is accompanied by comparing actual attainments against the projected allocation and using it as a yardstick in determining the effective use of advertising.

Advertising budget is an estimate of future advertising expenditure that will be used to implement managerial decisions to maintain or improve profit results. In advertising budget the money must be allocated to various promotional forms in such a manner as to minimize the waste and maximize the utility of such budgets.

Advertising allocation must be considered as a capital investment rather than current expense. Investment is a capital asset that brings benefits in the future. Advertising budget must be properly planned with the future long term benefits (objectives).

The usual starting place for management in setting the advertising budget is to decide the overall objectives of the company. The objectives can be e.g., the growth, profits, net return investments, attracting personnel etc.

Although more than the use of advertising will be involved in attaining these objectives, the forming of the advertising budget provides a time for reviewing them in relation to the type of marketing programme that should be used

Once the company has set the overall corporate goals, it can then formulate the specific campaign objectives. These objectives will provide the direction and guidance for the advertising strategy. Each objective should be evaluated on the basis of weather or not it will serve in helping to attain the overall goals of the company. This will avoid selecting a goal that may conflict with the broader aims of the company.

Advertising can be used for many and diverse objectives. However, since most companies hope that their advertising expenditures will ultimately generate sales, it is important to examine the relationship between advertising and sales, designated the sales response function.

Although there is no universal agreement as to the pattern it follows, or even its existence, the relationship between advertising and sales is frequently described as an s-shaped function. Fig. 17.1 provides a graphic representation of the sales/advertising relationship. Note that the axes of the graph are not numbered since one campaign differs from another. 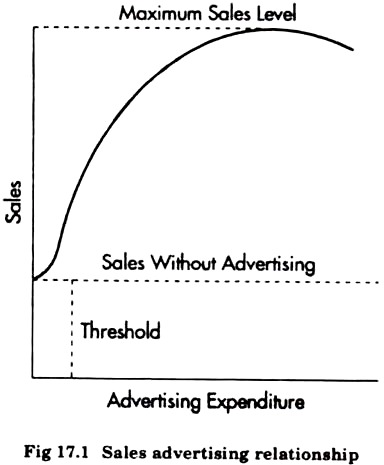 1. Sales will occur without any advertising.

2. Below a certain threshold level, advertising expenditures will be ineffective in changing sales.

3. There is a maximum sales level and regardless of any additional amount that may be spent on advertising, sales will not exceed this maximum. The reason for this will vary from an inability to consume more of the product to production being at its maximum to any other factor which will not allow sales of particular product to exceed a certain level.

4. There is a diminishing return for advertising expenditures. Although initially advertising may create extensive sales, it becomes less efficient as more money is spent.

As far as the validity of ‘s’ shaped curve (Fig. 17.1) is concerned, it is still a research topic. Still sales are influenced by so many other factors than advertising.

While developing the advertising budget the two considerations that must be considered are —that budget must be constructed with the financial capabilities of the company and it must contain specific details on the allocation of funds to specific operations.

A logical approach to determine the advertising appropriation is to select the point at which an additional rupee spent on advertising would bring an additional profit of one rupee in economic terms. Fig. 17.2 represents the concept of marginal analysis.

Referring to Fig. 17.2 the optional expenditure level is the point where marginal costs equal to the marginal revenue they generate (Point A). If sum of advertising expenditure exceeds the revenue these efforts generate, it can be inferred that the appropriations are too high and the reduction in advertis­ing budget is to be made. If revenues are higher, a higher budget is required. 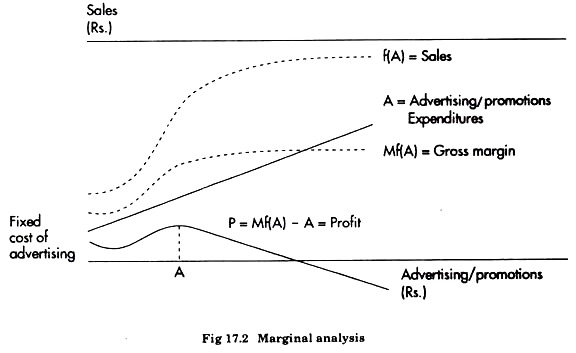 While the marginal analysis concept looks like to be very logical, but there are certain weaknesses to this approach.

These weaknesses are the assumptions which it incorporates:

(a) Sales are a direct result of advertising expenditure and this effect can be measured.

(b) Advertising & promotional expenses are the only responsible factors for sales.

In overall perspective, the economic approach to advertising is logical but the difficulties associated with determining the effects of promotional efforts on sales and revenues limits its applicability. Marginal analysis is seldom used as a basis for budgeting.