After reading this article you will learn about the economic effects of advertising.

Although the advertising is generally accepted as being a useful business tool, there are many who question its value to society beyond its immediate commercial effect.

This concern is manifested in the form of large number of criticisms which have been made both of advertisers and of the advertising process. A great many of these criticisms relate to what is perceived to be undesirable economic side effects of advertising.

Advertising is criticized on the following economic grounds:

1. The cost of advertising drives product prices higher than they would be without advertising.

2. Advertising concentrates too much power in the hands of big advertisers, since they can afford to stifle competition from smaller advertisers.

3. Advertising relies on misleading claims and sometimes out right deception to sell products.

5. Advertising is too intrusive, invading peoples lives all day with messages that are loud, obnoxious, and repetitive to the point of torture.

The advertising is defended on the following economic grounds:

2. Advertising is a means by which the demand for a product can be increased, thereby enabling economies of large scale manufacturing and distribution to be experienced. The savings are then passed on the consumer in the form of lower prices.

4. Advertising communicates about the variety and quality of goods offered and stimulates competition in technical progress.

1. Criticism most frequently made of advertising is that in so far as it is an unnecessary business cost. This cost is reflected in a higher selling price for the goods.

On the other side people say that the advertising is a demand stimulant which enables manufacturers to experience economies of large scale production and distribution and the consequent reduction in unit cost that is passed on to the consumer in the form of lower prices. It is unethical on the part of the marketer to pass the total cost of advertising totally on to the customers.

In this connection MRTPC issued notice to cosmetic companies (Exhibit 13.1). 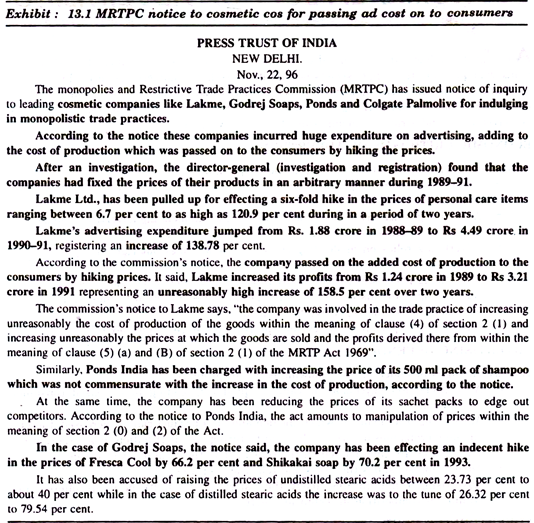 Advertising is not at all directly concerned with production cost, but it has significant indirect impact on production cost. By boosting up the demand it provides an incentive for higher production, with the possibilities of economies of scale.

As Bordon suggested that the role of advertising is frequently exaggerated and that prevailing social and environmental conditions are more of the fundamental importance in determining basic demand trends.

According to Bordon, advertising leads to increase in demand when:

1. The products can be distinguished easily from its substitutes. Thus advertising is likely to be more effective for refrigerators, electric shavers, TV than sugar and salt.

2. It is possible to appeal to emotional buying motives.

3. The psychological and physical factors influencing demand are favourable. These include fashion, social standards, incomes and the size and distribution of the population.

4. Sufficient finance is available to support a certain minimum level of advertising.

5. Advertising can be used to reveal and emphasize the product hidden qualities, (incase of watches, refrigerators, T.V. etc.).

6. No doubt advertising is instrumental in increasing the demand, the increase in demand may be because of alternative marketing strategies e.g., reduction in price, increase in distribution level, change in quality of product etc.

Advertising and Concept of Value Added:

The concept of value added when applied to advertising recognizes the fact that a product consist not merely of the physical product itself, but also a psychological addition.

1. By emphasizing on non-price differences of a product, advertising modifies the consumer’s perception and adds a certain perceptual utility.

2. If advertising creates extra perceptual value, a consumer will generally be prepared to pay more for it in the expectation that he will derive a greater satisfaction than from a physically similar but psychologically dissimilar goods.

3. The buying a good with a strong and positive image attached to it, the consumer derives a degree of satisfaction which he would not experience where he buy a similar but not advertised product, even if the non-advertised product is sold at the lower price. The image and reputation is very important.

Advertising as an Aid to Technical Progress:

According to Galbraith, advertising, along with other marketing tools is a means by which the risks facing the firm can be reduced.

Technical progress is the function of 3 factors:

Advertising results in products of a high and consistent quality. The reasoning is—because of advertising consumer recognizes the brand and if satisfied will buy it again with the knowledge that it would be of same quality as the initial purchase.

Monopoly denotes a complete control of the market by one organisation. As advertising aims at increasing the demand for a particular brand and establishing a brand image, it first separates and then isolates its market for the total market by creating a separate distinct personality for its brand.

1. Monopoly means that the company exercises a total control over the market.

2. In detergent market (Premium) Aerial and surf enjoy near monopolies.

3. Advertising has become a potent tool for creating and strengthening monopolies in the private and public sectors.

4. In the tooth paste market—Colgate Palmolive has 50% market share.

5. In the soap market, HLL, Godrej enjoys near monopolies.

6. However, powerful the monopoly is, it is not perpetual e.g., Colgate is threat ended by close up and Pepsodent continuously.

7. Ina genuinely free market, the monopoly built through advertising can be broken. Acceptance of the view that a high level of advertising expenditure can be used to restrict the ability of other firms to compete and therefore, ultimately leading to monopolistic conditions.

This argument is based on the following five factors:

1. The use of heavy advertising creates a barrier to other firms wishing to enter the market.

2. Having minimised the effects of competition, the monopolist is able to raise his prices and partially recover the cost of advertising.

3. Large wealthy companies are able to spend large sums on advertising and this enables them to make their products appear sufficiently psychologically different to be able to capture a substantial part of a given market.

4. The higher prices being charged result in high profits.

5. Because new companies are unable to enter the market, the degree of economic concentration increases.

Jules Backman, in his book, Advertising & Competition referred these factors as “The power of the large Purse”.

To avoid this waste the following principles should be observed:

1. It should not be unethical.

2. Advertising must ensure the satisfactory quality at fair prices.

3. It must provide accurate and verifiable information about the uses and benefits of the product or service advertised.

4. The information provided must enable consumers to make informed choices or decisions in the market place.

5. It must give the exact maximum price of the product.