It was developed to represent the stages a sales person must take a customer through in the personal selling process. The effect is the action into which a prospect may be induced as a result of advertising.

It highlights the importance of catching the eye/ear of the prospect and creating interest through the advertising message and its presentation. The desire to obtain advertising goods/ services may be generated though to varying degrees among different prospects as a result of advertising.

The final stage of action will depend not only on the determination of the prospect but also on other factors, such as availability, which is the function of distribution system.

This model shows the process by which the advertising works and assumes that a consumer passes through a series of steps in sequential order from initial awareness of a product or service to actual purchase.

A basic premise of this model is that advertising effects occur over a period of time. Advertising communication may not lead to immediate behavioural response or purchase; rather, a series of effects must occur, with each step fulfilled before the consumer can move to the next stage in the hierarchy.

The model takes into account the cognizance of the competitive situation. Such competition may arise between brands of a product or even between substitute products as perceived by prospects constituting the target audience

The stage of liking following those of awareness and knowledge may refer to the advertising thus emphasizing the creative aspects. Performance for the product or the brands play be the combined effect of the product characteristics and their relevance to the target audience, and of advertising.

Model is evolved from work on the diffusion of innovations. This model represent the stages a consumer passes through in adopting an innovation—innovation such as a new product.

Like the other models, this model says potential adopters must be moved through a series of steps before taking some action (in this case deciding to adopt a new product). The steps preceding adoption include awareness, interest evaluation, and trial.

The challenge facing companies introducing new products is to create awareness and interest among consumers and then get them to evaluate the product favourably. The best way to evaluate a new product is through actual use so that performance can be judged.

Marketers often encourage trial by using demonstration or sampling programmes or allowing consumers to use a product with minimal commitment. After trial, consumer either adopt the product or reject it. The decision in favour of making an evaluation is likely to be influenced by information available from various sources including advertising.

Evaluation is a major step towards the adoption of the product/service.

Developed by Williom Mc Guire, the model assumes that the receiver in a persuasive communication situation like advertising is an information processor or problem solver.

He suggests the series of steps a receiver goes through in being persuaded constitutes a response hierarchy. The stages of this model are similar to the hierarchy of effects sequence, Mention and comprehension are similar to awareness and knowledge, and yielding is synonymous with liking.

This model includes a stage not found in the other models, retention, or the receiver’s ability to retain that portion of the comprehended information that he accepts as valid or relevant. This stage is important since most promotional campaigns are designed not to motivate consumers to take immediate action but rather to provide information that will be used later when a purchase decision is made. 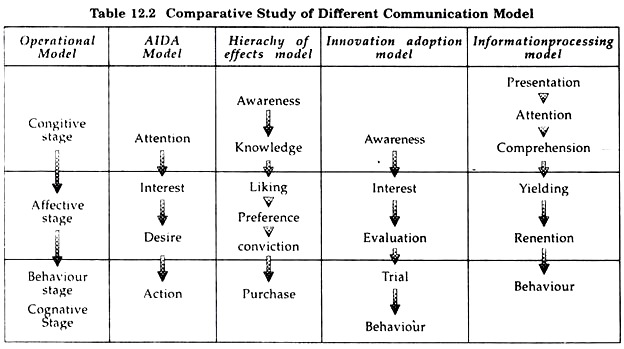 Developed by O’ Brien, the model integrate various stages of decision making by buyers. According to an study to know the purchasing behaviour of 634 housewives for a brand of convenience food for a five months period, it was indicated that building up the confidence in the brand was an important cognitive stage operating between awareness and attitude alteration or formation.

Any modification in the attitude towards the usage of the brand is likely to affect purchases in future. Favourableness of word of mouth communication contributes to building of confidence. 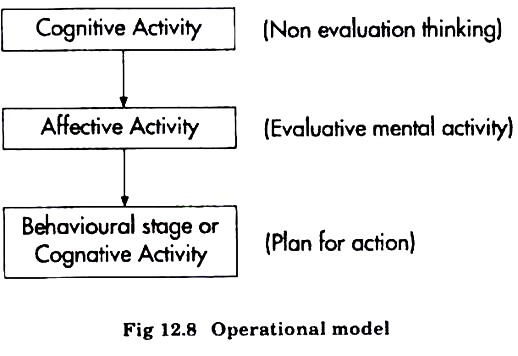