After reading this article you will learn about the relationship between the superior and subordinate according to V.A. Graicunas

These relationships arise between the manager and group of his subordinates in all possible combinations.

Thus in the above example there would be two direct group relationships:

These relationships arise among the subordinates working under a common superior.

In the above example there would be two cross- relationships:

Where n = number of subordinates.

Hence, he has established that for 2, 3 and 4 subordinates the number of total relationships would be 6,18 and 44 respectively.

Applying the formula for 4 subordinates

However, his approach suffers from several shortcomings. Firstly, it ignores the intensity of their relationships and importance. Secondly, he left out certain possible relationships, particularly in cross-relationships.

Thirdly, he failed to identify the factors which govern the span of management such as nature of work type of technology, ability of the manager, capacity of subordinates, degree of decentralisation, planning, staff assistance, communication techniques and time available for supervision.

Anyway his mathematical formula has given us an idea of the different types of superior-subordinate relationships, which is very helpful in determining the span of control.

Based on the above analysis, the number of possible relationships can be shown in the form of table. 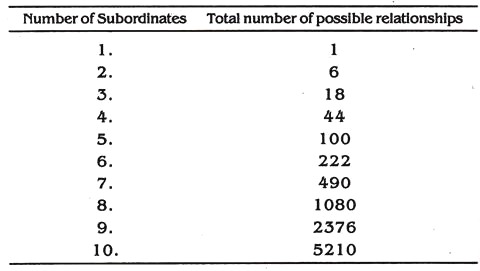