The entire work is divided into small tasks/jobs and each task/job is performed by a trained specialist.

According to Fayol, “The intent of division of work is to produce more and better work from the same effort. Specialisation is the most efficient way to use human effort.”

According to this principle, work can be performed more efficiently if it is divided in different tasks and each task is then performed by a specialist or trained worker. It is on the basis of this principle that one can find separate departments for finance, production, marketing, human resource etc. in an organisation.

The whole process of any work should be subdivided so that each subdivided part can be performed efficiently and accurately. Division or sharing of work makes people specialists in their respective functions. This principle is very helpful for any organization, be it private, public or government organisation. It enhances overall performance of an organisation because specialists perform consistently well as compared to generalists.

For example, Peter England, a famous brand name among quality shirts has divided its work among various groups. One group is responsible for making collars, other is engaged in stitching buttons, yet another is engaged in packing activities etc.

Advantages of Principle of Division of Work:

(a) It ensures specialisation in the organisation.

(b) It increases efficiency of employees.

(c) It results in increase in output.

According to Fayol. “Authority is the right to give orders and obtain obedience and responsibility is the corollary of authority.”

The positive effects of the principle of parity of authority and responsibility are as under:

(i) Builds safeguards against abuse of managerial power.

(ii) Misuse of authority is minimized.

Discipline means obedience to organizational rules and employment agreement that are necessary for functioning of any organisation. According to Fayol, discipline requires:

(i) Good supervision at all the levels of management.

In any organisation, many people with diverse profiles aim for achieving common organisational goals. All these people have to function as a cohesive team as per organisational discipline. They all should honour and follow a common system and code of conduct viz. reporting time, leave rules, overtime allowances, bonus etc. Discipline is necessary for the smooth functioning of the organisation.

For example, an agreement has been entered by the management and the labour union whereby the workers have agreed to work an hour extra without additional wages to take out the company from losses and in return the management has promised to increase wages of the worker when the mission is completed. Here, discipline would mean that both workers and the management will fulfill their commitment without any prejudice towards each other.

Discipline is a double-edged tool. On the one hand it enforces orderliness and on the other hand, it motivates them. Personnel entrusted with implementing it are expected to be competent and capable of achieving this balance. Employees must honour the commitment made by them and management must meet its promises viz. increase in wages, declaration of bonus etc. To achieve proper discipline, skilled superiors at all levels, clear and fair agreements and judicious application of penalties etc. are required.

For example, Mr. Abdul (Sales Executive), gets instructions from Mr. Parminder (Sales Manager) to sell more to reach targetted sales. At the same time, Mr. Abdul receives orders from Mr. John (Production Manager) to go slow in selling due to shortage of raw materials. In this case, conflict occurs in Mr. Abdul’s mind as to whose instructions he should follow.

(i) It helps in preventing the conflict regarding tasks to be done.

(iv) It helps in fixations of responsibility.

Disadvantages of violating this principle:

(i) Authority is undermined.

(ii) Lack of discipline in the organisation.

(iii) It will result in disturbance and lack of stability.

According to this principle, activities having the common goal must have one head and one plan. This helps in bringing unity of action and coordination in an organisation. For example, if a company is manufacturing two different products, it should have two separate divisions or departments for both the products. Each division or department should have their separate incharge, plans and resources.

Advantages of following the principle of Unity of Direction:

(i) It helps in preventing overlapping of activities.

(ii) It ensures unity of action and focused efforts.

The positive effects of the principle are as follows:

(i) Ensures coordination between individual and organizational goals.

(iii) No ego clashes as it gives credit for success of group efforts.

On the other hand, it should also be within the paying capacity of the business. In short, overall pay and compensation payable to workers should be fair and equitable. This ensures congenial atmosphere between the management and workers. In a healthy atmosphere, satisfied workers put in their best efforts to contribute their maximum.

Advantages of following the principle of remuneration of employees:

(i) This ensures healthy atmosphere and good relations between the employees and the management.

(ii) It ensures smooth functioning of the organisation.

(iii) It motivates employees to contribute their maximum.

According to Fayol, “There is a need to balance subordinate involvement through decentralization with managers’ retention of final authority through centralisation”. A company must be properly balanced i.e. it should neither be completely centralized nor decentralized. Hence, depending upon the profile of the organization there must be some element of centralization & decentralization in every organisation.

According to Fayol, “Organisations should have a chain of authority and communication that runs from top to bottom and should be followed by managers and the subordinates.”

Thus, Scalar chain refers to the formal lines of authority from highest rank to the lowest rank. The principle of scalar chain suggests that there should be a clear line of authority from top to bottom, linking superiors and subordinates at all levels. The scalar chain serves as a chain of command as well as communication. In normal circumstances, the formal communication is required to be made by following this chain.

For example, in an organisation a worker normally cannot directly communicate with the CEO. He has to follow the formal levels i.e. Foreman, Superintendent, Manager, Director etc. 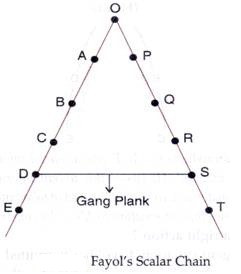 In the given figure the head ‘O’ has two lines of authority under him. One line consists of A-B-C-D-E and another consists of P-Q-R-S-T. Now suppose if D has to communicate with ‘S’ who is also at the same level as D then he has to follow the route D-C-B-A-O-P-Q-R-S according to the principle of Scalar Chain.

Fayol suggested that in normal course of action this chain should be strictly followed. However, in case of emergency D can directly communicate with S through Gang Plank. Gang plank is a shorter route in a scalar chain which allows employees at the same level to communicate with each other directly. It should be ensured that gang plank does not become a normal practice.

It should be used only in case of emergency, to prevent any likely distortion of message and to facilitate expeditious coordination.

According to Fayol, “People and material must be in suitable places at appropriate time for maximum efficiency”. The principle of Order is concerned with proper arrangement of things and placement of people.

The Order can be of following types:

Arrangement of things is called material order. It ensures proper and fixed place for various materials, tools and equipments.

Arrangement of people is referred to as social order. It ensures proper and fixed place or seat/cabin etc. for each employee in an organization.

(t) It results in increase in productivity and efficiency.

(ii) An organisation will function smoothly without any hindrance.

(iii) Minimization of wastage of time/cost in search of men and/or material.

For example, in a multinational corporation, people of various nations work together in an environment which is free from any kind of discrimination. Equal opportunities for growth and development are available to each employee.

Employees seek to become loyal and devoted if such treatment is given. Subordinates performing similar jobs, like two clerks, should be paid the same wage rate. Similarly, if two employees are latecomers, same treatment should be given to both defaulters. However, Equity does not mean that in an organization equal salary should be fixed for all types of works, instead it obviously has to be based on work profile.

The positive effects of principle are as follows:

(i) Satisfaction of employees leads to boosting up of their morale.

(ii) Development of cordial and harmonious relations among superiors and subordinates.

According to Fayol, “Employee Turnover should be minimized to maintain organisational efficiency”. In an organisation the employees should be selected and appointed after following a due and rigorous procedure. Once they are appointed they should be kept at their positions for a minimum fixed period.

According to this principle, worker should have stability of tenure and should be given sufficient time to show their performance. Moreover, frequent transfers or rotations should also be avoided. If an employee receives transfer order by the time he learns and gets settled in a job it will be leading to wastage of resources and he will not be able to contribute his best to the organisation.

(i) Rate of labour turnover will be slow.

(ii) Cost of recruitment, selection and training can be minimised.

According to Fayol, “Workers should be encouraged to develop and carry out their plans for improvement”. Initiative refers to the first step taken by the employees towards their self motivation. This principle states that employees at all levels should be given freedom to some extent so that they can come forward and use their skills to achieve expected goals.

It is worth mentioning that while applying the principle of initiative, the established practices of the enterprise should not be bypassed. For creating a healthy environment, employees’ suggestion system should be developed whereby initiatives or suggestions from the employees are invited. Some of those may certainly result in substantial reduction in cost and time.

(i) It develops sense of belongingness in employees.

Espirit de corps refers to team spirit i.e. harmony in work group and mutual understanding among workers. It helps to develop an atmosphere of mutual trust and understanding. It also concentrates on the famous saying viz ‘union is strength’.

In case of sports, all team members and in case of armed forces, all personnel play/work for their respective teams. They should not have a thinking that if they win, it is the Captain/Commander alone who will be rewarded. They must work for the team. Similar feeling should be developed among all members of the organization, so that the desired goals of the organization can be achieved with greater effectiveness and efficiency.

Positive effects of ‘espirit de corps’ are as follows:

(i) Develops coordination, mutual trust and belongingness among the employees.