This article throws light upon the three main steps involved in the process of control in an organisation. The steps are: 1. Establishing Standards 2. Apprising Performance 3. Taking Corrective Action.

A standard acts as a reference line or basis of comparison of actual performance in the organisation. Standards in enterprise should be set precisely and preferably in quantitative terms. It should be noted that setting standards is also closely linked with and is an integral part of the planning process in the organization.

Different standards of performance are set up for various operations at the planning stage, which serves as the basis of any control system.

Different types of standards are used for measuring the performance of different operations. Many standards are of physical nature, such as number of units, man-hour etc. and there are other standards, which are expressed, in monetary terms relating to sales, revenue, expenses, costs and so forth.

In addition to these standards, there are also standards of an intangible nature like reputation of the Firm Whenever standards are intangible, it is essential to lay down quantitative factors, which will determine the standards are being met, or not.

Apprising performance involves measuring of actual performance of various individuals, groups or units and then comparing it with the standards, which have already been set up at the planning stage. The quantitative measurement should be done in cases where standards have been set in quantitative terms.

In other cases, performance should be measured in terms of qualitative factors as in case of performance of industrial relations manager in any organization. Comparison of performance with standards too comparatively easier when the standards are expressed in quantitative terms in the organisation.

The process of performance appraisal will reveal the deviations from the standards in the organisation. The appraisal should try to analyze the various deviations and investigate into their causes. It is also important to establish a range, of deviations beyond which the attention of top management is warranted. Only such cases are reported up which pinpoint exceptional situations. This is called management by exception.

The Final step in the control process is taking corrective actions to that deviations may not occur again and the objectives of the organisation are fulfilled. This will involve taking certain decisions by the management like re-planning or redrawing of goals of standards, reassignment or classification of duties in the organisation.

It may also necessitate reforming the process of selection and training of workers. Thus, control function may require change in all other managerial functions. If the standards are found to be defective, they will be modified in the light of the observations, which fulfillments of objective. 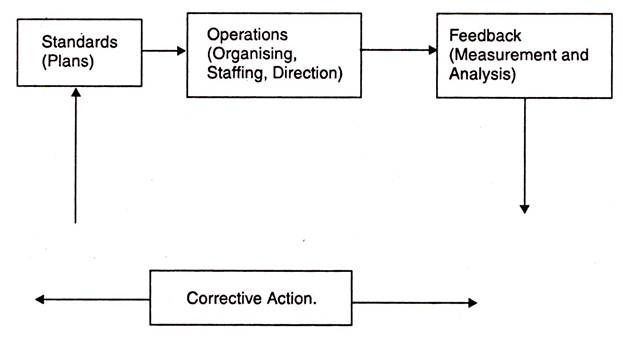