Markov analysis is a method of analyzing the current behaviour of some variable in an effort to predict the future behaviour of the same variable. This procedure was developed by the Russian mathematician, Andrei A. Markov early in this century. He first used it to describe and predict the behaviour of particles of gas in a closed container. As a management tool, Markov analysis has been successfully applied to a wide variety of decision situations.

Perhaps its widest use is in examining and predicting the behaviour of customers in terms of their brand loyalty and their switching from one brand to another. Markov processes are a special class of mathematical models which are often applicable to decision problems. In a Markov process, various states are defined. The probability of going to each of the states depends only on the present state and is independent of how we arrived at that state.

A simple Markov process is illustrated in the following example: 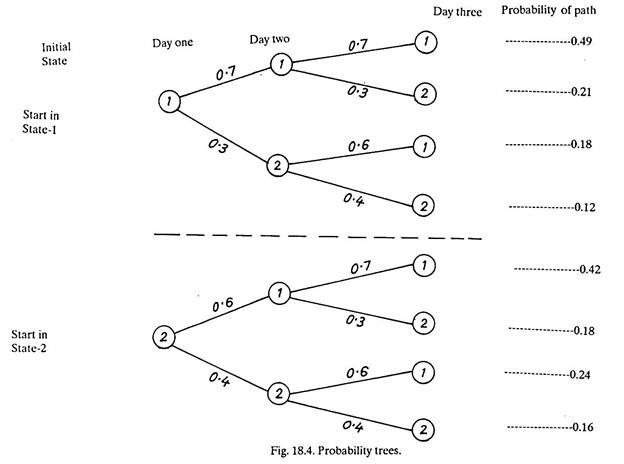 Calculations can similarly be made for next days and are given in Table 18.2 below:

For example, if we were deciding to lease either this machine or some other machine, the steady-state probability of state-2 would indicate the fraction of time the machine would be out of adjustment in the long run, and this fraction (e.g. 1/3) would be of interest to us in making the decision.

Markov analysis has come to be used as a marketing research tool for examining and forecasting the frequency with which customers will remain loyal to one brand or switch to others. It is generally assumed that customers do not shift from one brand to another at random, but instead will choose to buy brands in the future that reflect their choices in the past.

Other applications that have been found for Markov Analysis include the following models:

A model for manpower planning,

A model for human needs,

A model for assessing the behaviour of stock prices,

A model for scheduling hospital admissions,