After reading this article you will learn about Span of Control:- 1. Importance of Span of Control or Supervision 2. Principle of span of control 3. Factors Determining.

Importance of Span of Control or Supervision:

How many subordinates can a manager supervise or control directly?

What should be the span or range of control or supervision is a controversial problem.

We have to recognise certain limitations on a human being influencing his span of control:

(1) He has limited time at his disposal for his activities. Time is a valuable but a scarce resource.

(2) He has limited available energy and must depend upon others to supplement his energy when his workload increases considerably.

(3) He can give attention and concentrate only on a limited number of subjects or problems at a time.

These three limitations on the capacity of human beings:

(1) Support the concept of span of control and

(2) Also indicate that the optimum span of control varies among individuals and depends upon a number of situational factors, such as presence of good communication devices, degree of decentralisation, control practices, type of management, nature of work to be supervised and so on.

Physical conditions, quality of communication, for example, can change the span of control, i.e., the number of people that one can control and supervise directly.

There is no controversy regarding the existence of the span of control principle. Of course, we cannot lay down a universal and exact limit of span of control, say, 6 to 8 persons controllable by an executive, particularly at a higher level.

It is obvious that a single executive cannot supervise effectively too many subordinates. There is a close relation between delegation and span of control. If the limit of span of control is crossed, we have inadequate supervision and control.

If the limit is not reached — e.g., a manager can control eight subordinates but is controlling only four subordinates — we have too close control, the number of management levels would increase and multiple levels in the hierarchy of organisation will further create difficulty in upward and downward communication.

Similarly, if the number of subordinates is too small, the executive will be idle and his services will be underutilised. The oldest reference to span of control and delegation is found in Jethro’s advice to Moses that he should establish “rulers of thousands and rulers of hundreds, and rulers of fifties, and rulers of tens.”

Principle of span of control:

The number of subordinate positions (in an organisation chart) directly reporting (accountable) to a superior position, i.e., boss, should be that number which is considered as optimum and which balances:

(2) The spans of personality, energy, knowledge and attention of the superior,

(4) The expense problems associated with additional levels of management or organisation.

It shall be determined on the basis of:

(1) The number of important activities at the next lower level of the organisation structure,

(2) The personal qualities (e.g., intelligence, experience) of the superior as well as the subordinates, and

(3) The development of communications within and between the levels of the organisation structure.

Proper span of control is a behavioural and situational question. It varies with:

(1) Ability of both the boss and his subordinates: (If both are capable, large span is feasible);

(2) Relative location of the superior in the management hierarchy (higher location, lower span);

(3) Fear of possible rival (lower span due to reduced delegation);

(4) Faith of the superior in his subordinates (higher span due to more delegation);

(6) The nature or type of work (limited span due to highly dynamic and volatile activities); and 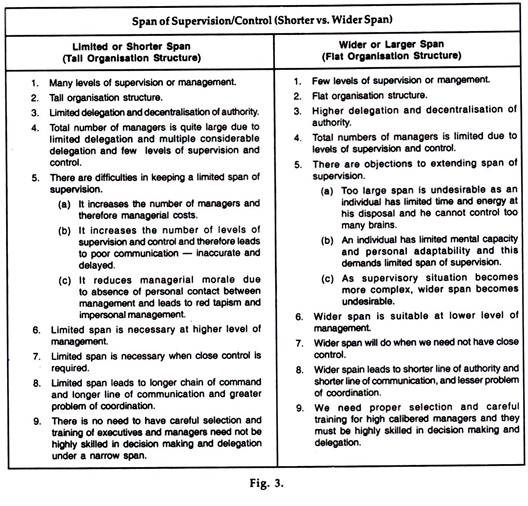 Two variables directly influence limit on the span of control:

(1) Capacity of the higher executive to manage his work.

(2) Capacities of subordinate executives. Apart from these two basic factors, there are many other factors which can determine the actual optimum span of control.

1. The Type of Organisation and Management:

Clear and comprehensive plans and policies at all levels reduce the volume of personal decision making of a manager. Therefore, his span of control and supervision can easily increase. Clarity of plan and definiteness of responsibility and use of standing plans (policies, procedures and rules) reduce the problems of decision making.

Clear-cut and precise authority-responsibility, planned performance standards, standing operating procedures, standard methods, good budgets, etc., are some of the means to reduce the number of decisions a manager has to make. Hence, span of control will increase.

2. Nature and Importance of Work to be Supervised:

If the work is routine, highly standardised and uniform, we can establish standing plans because problems follow a set pattern. Few emergency or complex decisions are required. We have usually programmed decisions.

Hence, the span of control can increase. Variety and complexity of problems, volatile and changing work, higher uncertainty and risk in decision making are usually found at the top management level of big organisations. Hence, at higher level of management we have limited span of control.

If a manager gets staff help in performing his reserved responsibilities (planning, organising, motivating, etc.) he can bear a greater work load and can have a larger span of control. With adequate specialised staff and also personal staff services, a manager even at a higher level can handle many subordinates.

Of course, it is presumed that a manager is skilled and able to delegate his authority to many subordinates. Capable staff help and superior-subordinate working relationship based on mutual faith and confidence are both essential to widen the span of control.

4. Ability and Capacity of Subordinates:

In addition to the best staff help and ability to delegate, we require competent and qualified line subordinates to take up responsibility and shoulder accountability for work performance without detailed supervision of the boss.

If subordinates are trained, developed and experienced men with self- confidence and self-control, they will need minimum supervision or attention of the boss. Thus, the quality of line subordinates can influence the span of control as a limiting factor.

5. Other Factors Governing the Span of Control in Practice are:

Time available for supervision, degree of decentralisation and delegation (higher degree, greater span) and control practices. For instance, under personal observation, we have limited span and under a system of written progress reports, we have wider span of control.