Laws of Returns occupy a central position in production. It has been seen that an entrepreneur increases the quantity of various factors of production in order to increase the output of his factory so as to earn higher profits. The returns due to these additions in the factors of production are not always fixed. 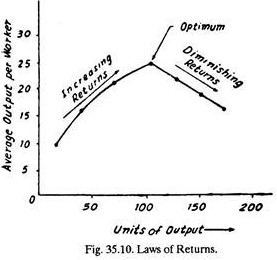 Table 35.7 shows that there are three firms namely X, Y and Z having their factors of production combined in the same proportion, but Y is larger than Z and Z larger than Y. It may be that to expand the firm from size if to Y will yield increasing returns: firm Y has all production factors 5 times than of X, but its output is more than 5 times that of X. If the firm expands from size Y to size Z, diminishing returns set in, because, Z has all production factors 2 times that of Y whereas its output is less than twice that of Y.

(A) The Law of Increasing Returns:

The law of Increasing Returns states that:

The increase in efficiency as shown in TABLE 35.8 and which results in larger output may be because of the following reasons:

(i) If a few more workers and extra machines are provided the production will naturally go up. The overheads will remain more or less constant. This will result in a drop in the per piece cost.

(ii) The efficiency of the organisation can also be improved through specialization. Special purpose machines, technical experts and trained labour will result in increase in production and fall in the per piece cost.

Increasing returns according to the Law of Increasing Returns, appear to be due to varying the proportions between the factors of production, though obviously this can be achieved only by increasing the size of the firm.

(B) The Law of Diminishing Returns:

Returns (e.g., increase in output) do not continue increasing indefinitely as a firm grows in size. A time comes when an attempt to increase the output after the fixed factors of production are fully worked, will meet with diminishing retunes.

Thus, the law of diminishing Returns states that:

“With a fixed amount of anyone factor of production, successive increase in other (variable) factors (of production) will after a point, yield a diminishing increment in output”.

The law of diminishing returns as applied to land states that:

“After a certain point, successive applications of equal amounts of resources to a given area of land produce a less than proportionate return”. If this were not so, there would be no limit to the yield from one small area of land.

Table 35.9 explains diminishing returns with labour as the variable factor.

The table shows that after more than 4 workers are employed, though the output units increase, the average output per worker reduces and so illustrates the law of Diminishing Returns with reference to labour.

The cause for decline in the average output per worker, after more than a definite number of workers/capital are employed can be explained as follows:

In the case of multi-storey building construction, the higher the building, the larger will be the proportional expenditure on constructing upper storeys because more labour and capital is required in taking building material from ground floor to upper storeys. On the other hand, rental return of the upper storeys goes on diminishing.

The law of Diminishing Return finds the following applications:

(C) The Law of Constant Returns:

If the actions of the laws of increasing and diminishing returns neutralize each other or are balanced we have the law of Constant Returns. An increased produce is obtained by labour and sacrifice increased just in proportion. When the application of fresh dose of factors of production results in an equal return due to each successive dose, the law of constant returns is said to apply.

Table 35.10 explains the law of Constant Returns. Up to two workers, the return increases, whereas with the further increase in the number of workers, the average output per worker remains constant (i.e., 20).

For the Law of Constant Returns to hold good, raw material should be available in bulk so that its price does not rise. Secondly the increase in size of the industry should not lead to greater division of labour. Thirdly, increasing and Decreasing Returns should counterbalance so that production is at constant cost. Such a situation may be visualized in an industry which manufac­tures raw material also for itself.