After reading this article you will learn about designing jobs in an organisation.

After employees have been hired, they go to work and start performing a job that the organisation has designed for them. Today’s employees have more say in how work is done than ever before and plays a large role in defining it.

Job-design is the specification of an employee’s task-related activities. The tendency for jobs to become increasingly narrow and specialised. This high degree of specialisation is likely to increase efficiency, but it is also likely to decrease satisfaction and motivation.

Hence, managers have over the years learned to search for alternatives to work specialisation, looking for ways to design jobs so as to keep employees satisfied and motivated to do their best.

Harold Koontz has argued that when workers are in group, their performance improves.

And Griffin has expressed the same view:

“When autonomous work groups are used, the group is given respon­sibility for designing the work system to be used to perform the task. The group assigns specific tasks to members, monitors and controls its own performance, and generally has considerable autonomy over work scheduling”.

Fig. 11.8 clearly demonstrates the difference between job design in autonomous work groups and in conventional production lines. At the top of the figure, we represent the typical assembly line system. Here, the job flows from one worker to the next, each of whom performs a specific task.

By contrast, in the autonomous work group shown at the bottom of the figure, however, workers are combined in a group, and the tasks are allocated according to the group’s decisions. The effect is much like working in a small workshop as members of a team rather than in a larger manufacturing plant. 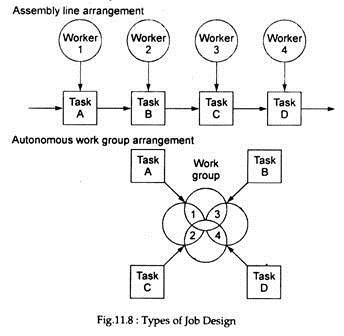 Other issues currently surrounding job design include the exact nature of the relationship between job design and individual worker performance as also the impact of automation on workers. The latter area is now attracting increasing managerial attention particularly in labour-surplus countries like India.