Marketing concept accepts the consumer as the king. It is different from selling concept because it starts with the customer needs and wants, integrates marketing functions, and offers consumer satisfaction at a profit whereas selling concept is concerned only with the sales volume and the company’s needs.

Most companies have not rea­ched ‘full marketing maturity stage’. As Kotler says, ‘most companies do not grasp or embrace the marketing concept until driven to it by circumstance’.

The marketing concept, thus, needs a central place or position in the business firm if customers needs and wants have to be correctly under­stood and satisfied. It needs to influence and control over other depart­ments of a firm if the customers have to be satisfied.

This satisfaction is possible to be delivered if the other departments such as production, finance, personnel, and R&D perform their functions in constant collabora­tion and rapport with the marketing department.

This aspect can be illustra­ted by a diagram as under: 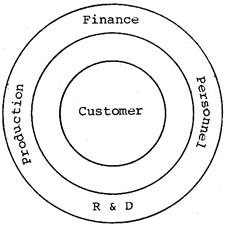 It will be seen that though the customer or consumer is at the center of the circle, he is satisfied by the marketing concept which is assisted by other four functions of management whereas selling concept means that the consumer is zero.

Societal marketing concept goes beyond the marketing concept because it is concerned with the long-term benefits of the consumers and the well-being of society. It involves the control of pollution, inflation, shortages and neglect of social services.

The question is whether the firm that does an excellent job of servicing, serving, and satisfying an indivi­dual customer wants is definitely acting in the long-run interests of the consumers and society. The marketing concept side-steps the potential con­flicts between the consumer wants, consumer interests and the long-run societal welfare.

In India, it has become a big nuisance and a menace. In other words, we can state that the manufacturing companies have forgotten their social responsibilities because they are much concerned with profit only.

Following the remarks of Philip Kotler, it can be said that the socie­tal marketing concept holds the organisational task to determine the needs, wants, and interests of the target markets and to deliver the desired satis­faction more effectively and efficiently than competitors in a way that preserves or enhances the well-being of the consumers and society.

The societal marketing concept calls upon the marketers to balance three consi­derations in setting their marketing policies namely:

In India, societal marketing concept has hardly been grasped by the marketing/manufacturing companies. Golden Tobacco Company indulges in manu­facturing and aggressive advertising of harmful cigarettes, yet it speaks of its having good management. Even same magazines such as Business India or Business World give good images of such companies. But the truth is that it does not fit into the societal marketing concept.

Societal marketing concept is a basic necessity in India. This requires veil qualified and competent professionals in the marketing department.