After reading this article you will learn about Promotion:- 1. Subject-Matter of Promotion 2. Meaning of Promotion 3. Elements 4. Promotion Messages 5. Main Purpose.

Broadly speaking promotion means to push forward or to advance an idea in such a way as to gain its acceptance and approval. Promotion is any communicative activity whose main object is to move forward a product, service or idea in a channel of distribution.

It is an effort by a marketer to inform and persuade buyers to accept, resell, recommend, or use the article, service or idea which is being promoted. Promotion is a form of communication with an additional element of persuasion.

The promotional activities always attempt to affect knowledge, attitudes, preferences and behaviour of recipients, i.e., buyers. The element of persuasion to accept ideas, products, services, etc., is the heart of promotion.

In any exchange activity communication is absolutely necessary. You may have the best product, package and so on. It may have fair price. But people will not buy your product, if they have never heard of it, and they are simply unaware of its existence.

The marketer must communicate to his prospective buyers and provide them adequate information in a persuasive language. People must know that the right product is available at the right place and at the right price.

This is the job of promotion in marketing. Sales do not take place automatically without promotion or marketing communication, even though our product is superb, it can precisely fill the customer wants, and we have appropriate channels for distribution.

In essence, promotion is the spark plug in our marketing mix. It is said that ‘nothing happens until somebody promotes something’. Promotion is the third element of marketing mix and it is an important marketing strategy. It fulfils the marketers’ need to communicate with consumers.

Promotion is the process of marketing communication involving in-formation, persuasion and influence. Promotion has been defined as “the coordinated self-initiated efforts to establish channels of information and persuasion to facilitate or foster the sale of goods or services, or the acceptance of ideas or points of view”. It is a form of non-price competition.

Essentially promotion is persuasive communication to inform potential customers of the existence of products, to persuade them that those products have want satisfying capabilities. Consumers really speaking buy a bundle of expectations (a package of utilities) to satisfy their economic, psychosocial wants and desires. The promotion offers the message, viz., the communication of these benefits to consumers.

Promotion is responsible for awakening and stimulating consumer demand for your product. It can create demand, capture demand from rivals and maintain demand for your products even against keen, competition.
Of course, it is taken for granted that your product has the capacity to satisfy consumer expectations and can fill their wants and desires. It is a truism that nothing can be sold and nothing can make money (except mint) without some means of promotion.

Marketers have adopted a communication view of their firms’ pro-motional activities. Receiver is now regarded as an active participant in the process of communication. All marketing communications must be planned as part of a total system, not as independent pieces.

5. All forms of sales promotion.

All marketing communications or forms of promotion try to influence consumer’s attitudes, beliefs, ways of living or life style, values and preferences towards a company and its products, and thereby influence his/her behaviour.

It is defined as any paid form of non-personal presentation and promotion of ideas, goods and services by an identified sponsor. It is impersonal salesmanship for mass selling, a means of mass communication.

“It is non-personal stimulation of demand for a product, service or a business unit by placing commercially significant news about it in a publication or obtaining favourable presentation of it upon radio, television, or stage that is not paid for by the sponsor.

Modern package can act as a silent and colorful salesman, performing all functions of salesmanship in retail stores, Impulse selling is done by packaging. Package is also a means of advertising.

It is the best means of oral and face-to-face communication and presentation with the prospect for the purpose of making sales. There may be one prospect or a number of prospects in the personal conversation.

It covers those marketing activities other than advertising, publicity and personal selling that stimulate consumer purchasing and dealer effectiveness. Such activities are displays, shows, exhibitions, demonstrations, and many other non-routine selling efforts at the point of purchase.

Sales promotion tries to complement the other means of promotion given above. All kinds of promotion play the role of communication channels between the marketer (the source and the sender of message) and the consumer (the receiver of the message).

Promotion as an element of marketing mix has three broad objectives:

The overall objective of promotion is, of course, influencing the buyer behaviour and his predispositions (needs, attitudes, goals, beliefs, values and preferences).

(1) Persuasive communication influencing buyers and inducing them to purchase or repurchase.

(2) Powerful tool of demand creation and meeting competition in the market.

It is also called an instrument of non-price competition. Price and promotion are alternative means of facing competition, and creation/ maintenance of demand. In mass marketing and mass distribution promotion is the trump card of a marketer in a competitive market. Promotion can avoid price war and still can capture consumer demand.

Five promotion mix elements have a definite role in all stages of the selling process. Publicity is more effective in the awareness stage. Advertising gradually becomes less and less effective over a time span. Hence, reminder advertisement is necessary.

Personal selling becomes more and more effective as interpersonal interaction assumes increasing importance. Supermarkets depend upon packaging as their silent colorful salesman. They do not have counter salesman. Closing of sales needs not only personal selling but also sales promotion tools at the points of purchase in order to provide additional incentives for buyer’s action.

The message transmitted through all forms of promotion must describe the product features in terms of customer wants and desires. The problem solving or need-satisfaction approach is better while transmitting the message. It develops better understanding of customer needs and problems. Remember that customer are buying a bundle of benefits.

For effective communication, sender and receiver must have a common background of experience, e.g., a common culture, common language so that they will be able to symbolize certain ideas, concepts and events in a manner easily understandable to each other.

Meaning attached to the various words, ideas and symbols may differ when sender and receiver of the message do not have common frame of reference and common field or background of experience. In absence of such an overlap, communication may be poor or even impossible.

The best example of the absence of overlap is the communication of product benefits in French or Japanese language to a villager in India or any other developing country at present. Communicator may be stressing the benefits in which, receivers are not interested at all. In that case there will be a communication barrier leading to bad communication.

Promotion by definition is persuasive communication. The message is arranged to facilitate the consumer decision making process (awareness, knowledge, liking, preference, conviction and action). Promotion message is one source of information (though very important) at the disposal of a buyer.

The buyer behaviour is influenced by many other sources of information available from many sources. If promotion message is useful, relevant and credible, the buyer will be influenced and persuaded to take action as desired by the marketer or communicator.

Unfortunately, we come across fraudulent, deceitful and misleading promotion message. The innocent consumer relying, on the promotion message, purchases the product but very soon he discovers the dissonance and frustration in his post-purchase experience.

Without Satisfaction, repurchase and consumer loyalty will be impossible; on the other hand, word of mouth communication will act as anti-advertisement.

Promotion tries to alter demand curve to the right (from D1 to D2). Thus, promotion is employed to retain the price and secure increasing sales at the same price. Promotion can also raise the price but retain the sales level by making the demand relatively inelastic, e.g., through creating brand loyalty and patronage by intensive advertising and sales promotion.

Either through shifting the demand to the right or making the demand more inelastic, the object of higher sales revenue can be accomplished with the help of persuasive marketing communications.

In short, all forms of promotion can act as the best means of non-price competition, and without any change in the price, marketers can succeed in influencing to a certain extent the buyer behaviour and partially exercise control over demand and market without using the weapon of price to meet competition. 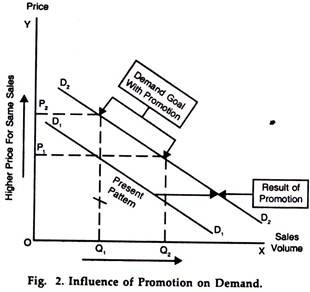 The favourable change in the pattern of consumer demand is secured through commercial information, persuasion and influence with the help of personal selling, advertising, publicity and sales promotion devices.