Several liquidity ratios are used to learn how liquid (easily converted into cash) an organisation’s assets are. These ratios measure the ability of the organisation to raise enough cash in a short period of time to meet its short-term needs. The most common liquidity ratio is the current ratio. It is calculated by dividing current assets by current liabilities.

These ratios measure how well a firm uses its assets. For example, suppose a company’s total sales amount to Rs. 300,000 but its total assets are Rs. 200,000. Therefore, its total asset-utilisation ratio is 1.5 which is bad.

Debt ratios reflect ability to meet long-term financial obligations. The most commonly used debt ratio is total liabilities divided by total assets. These ratios are calculated to see if an organisation can meet its long-term obligations such as bonds, mortgages, and notes payable.

An example is total debt divided by net worth. If the total debt of a business is Rs. 600,000 and the net worth Rs. 1,200,000, the firm’s assets are financed by 50% debt. If the industry average is 60%, there is hardly any problem of borrowing long-term capital.

But if the industry average is 40%, the opportunities for borrowing are limited because a high proportion of debt reduces the creditworthiness of the company. The higher this ratio, the smaller (poorer) credit risk the company is perceived to be.

To make the ratio really meaningful it has to be compared with past performance or that of other firms belonging to the same industry.

Table 18.6 gives description of the most frequently used ratios, how they are arrived at, and what purpose(s) do they serve. 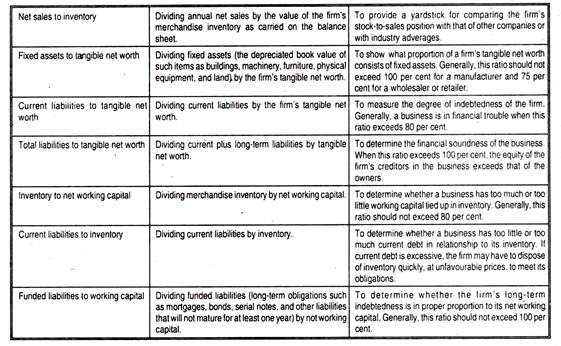