This article throws light upon the top three types of control in an organisation. The types are: 1. Feed-Forward 2. Concurrent (Preventive) 3. Feedback Controls.

Feed forward controls are future-directed — they attempt to detect and anticipate problems or deviations from the standards in advance of their occurrence (at various points throughout the processes). They are in-process controls and are much more active, aggressive in nature, allowing corrective action to be taken in advance of the problem.

Diagnostic controls seek to determine what deviation is taking (or has taken) place. The sales manager, for instance, who receives the monthly sales figures (showing sales quota results) is virtually working with a diagnostic control device. It will no doubt indicate deviations from the acceptable standard (i.e., what is wrong) but not why. Discovering the ‘why’ is often the most difficult part of the process.

Therapeutic controls tell us both what and why, and then proceed to take corrective action. For example, engines having internal control system such as an engine speed governor and automatic transmission are designed to take necessary corrective actions when warranted by the conditions.

An example of utilisation of such control can be found in case of a manager who conducts employee training using the coaching method. When, for instance, the trainee is performing the task, the manager observes him closely by standing on his side. The objective is to discover if any deviations from the intended processes take place.

In case a deviation occurs, the manager observes it, diagnoses the reason for the incorrect technique, and corrects the deviation immediately (i.e., without any loss of time). Thus the control and correction take place during the process itself, not after a few days.

Concurrent control, also called steering control because it allows people to act on a process or activity while it is proceeding, not after it is proceeding, nor after it is completed. Corrections and adjustments can be made as and when the need a rises. Such controls focus on establishing conditions that will make it difficult or impossible for deviations from norms to occur.

An example of concurrent control is the development by companies of job descriptions and job specifications. It may be recalled that job description identifies the job that has to be done, thus clarifying working relationships, responsibility areas, and authority relationships. It thus assists in preventing unnecessary duplication of effort (work) and potential organisational conflict.

In a like manner job specification identifies the abilities, training, education and characteristics needed of an employee to do the work. It is control device inasmuch as it works to prevent a person who is totally unqualified and unfit from being selected for the job, thereby saving money and time, and thus precluding potential poor performance.

Feedback control is future-oriented. It is historical in nature and is also known as post-action control. The implication is that the measured activity has already occurred, and it is impossible to go back and correct performance to bring it up to standard. Rather, corrections must occur after the act.

Such post-action controls focus on the end results of the process. The information derived is not utilised for corrective action on a project because it has already been completed. Such control provides information for a manager to examine and apply to future activities which are similar to the present one. The basic objective is to help prevent mistakes in the future.

For example, at the end of an accounting year, the manager should carefully review the analysis of the budget control report.

The report will suggest clear-cut answers to the following questions:

(1) What accounts were overdrawn?

(3) Were there any accounts with a surplus?

(5) Could unutilized funds have been allocated to other accounts?

(6) Were all priorities met by the budget?

However, at the end of the financial year it is not possible for the manager to modify budget expenditures or allocation for the past year. But this type of information can be fruitfully utilised to develop more realistic (fruitful) plans for the next financial year.

Fig.17.7 illustrates when each of the types of control is applied. Since preventive controls make it difficult or impossible for deviations to occur as they are normally placed at the start of the process (although the ordering was slightly different in Fig.17.6). 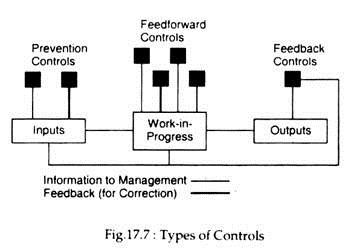 All the forms of controls described above are useful. Feed forward and prevention controls are sufficiently timely to permit management to make corrective changes and still achieve objectives. So they have great appeal to management.

But there are certain defects of these two forms of control. Firstly, they are costly. Secondly, there are so many activities that do not lend themselves to frequent or continuous monitoring. Thirdly, at some point excessive control becomes unproduc­tive, as in the case of sales representatives who spend their time filling out control reports for the regional office instead of meeting customers.

So it may be suggested that management must, therefore, use the control system that is most appropriate for the given situations.