This article throws light upon the eight major characteristics of effective control system. The characteristics are: 1. Integration with Planning 2. Flexibility 3. Acceptance by Members of the Organisation 4. Focus on Critical Activities 5. Timeliness 6. Economic Feasibility 7. Accuracy 8. Ease of Understanding.

First, to be effective, control systems should be integrated with planning. Fig. 17.10 shows one way in which this can be done. 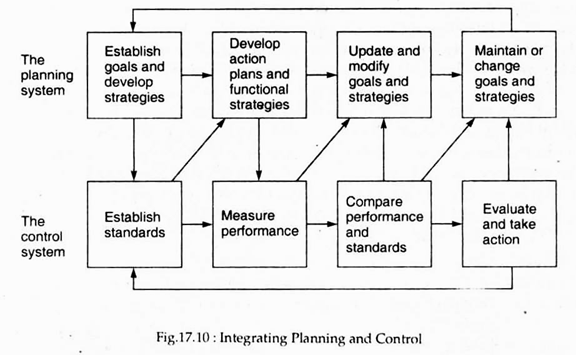 Finally, decisions about whether to maintain or change goals and strategy are affected by previous modifications and updates, by comparisons between standards and performance, and by evaluations and actions taken within the control system.

At the start of the process, planning plays a major role in shaping the control system. By the end of the process, however, the later stages of control exert a primary influence of planning. And, as P.F. Drucker has pointed out a careful integration of planning and control can improve the effectiveness of both sets of activities.

Characteristic # 3. Acceptance by Members of the Organisation:

The effectiveness and efficiency of controls largely depend on the acceptance by the members of the organisation.

Doing the right thing and doing things right both require people; controls are unlikely to work unless people want them. If controls are to be accepted, it is important that people clearly understand the purpose of the system and feel that they have an important stake in it, more so when new systems are established.

People resent controls, especially those considered excessive. Excessive controls create the impression that people are not treated to act on their own.

Both too many and too few controls can lead to frustration and lack of motivation. Controls that appear to be arbitrary or unnecessary can have demoralising (damaging) effect on the employees. Moreover, at times the standards set by management may be perceived as being unreasonable or unfair.

The proper activities should be controlled. When people recognise that certain specific areas will be monitored and compared to some standard, their behaviour is likely to be channeled toward the standards set.

Critical control areas (points) include all the areas of an organisation’s operations that directly affect the success of its key operations such as sales, revenue, expenses, inventory levels, personnel turnover, safety for people and other assets, etc.

Furthermore, each manager will have his (her) own critical areas to control. The focus should be on those areas where failures cannot be tolerated and the costs in time and money are excessive.

It may also be noted that management has to frequently balance control systems to assure that controlling one activity does not cause another to get out of control. For example, to meet production standard a supervisor may overtax machinery and equipment.

Likewise, a sales manager may cut prices drastically to reach the sales quota for his own division; unless he is working under a profit standard (constraint), reaching the sales standard, in itself, is not necessarily good. Thus it is essential for managers to ensure that there is proper balance of activities in the system.

Another characteristic of an effective control system is that it provides perform­ance information in a timely way. Timeliness does not necessarily mean maintaining a time schedule for exercising control. It simply means exercise of control mechanisms (or tech­nique) as and when required.

For control to be effective it must report deviations in time to allow management to take corrective action. Timely information, like accurate information, must be provided to those in charge so as to make controls effective. Giving managers excessive or irrelevant informa­tion is as serious a problem as is inadequate information.

The purpose of MIS is to gather, assemble, and interpret data, processing it into timely and accurate information that gets to those who need it. For instance, budget printouts are helpful only when the appropriate manager receives them in time.

In our example of MBE, if the president (sales) receives information about actual sales of January in April no corrective action can be taken for Feb-March. In some situations, timely information is needed constantly — hourly, daily, weekly, quarterly, annually or at longer intervals. The more timely information the manager is able to gather, the more will he be able to respond.

Control benefits should outweigh costs. In other words, control should be cost-effective. Thus the costs of the control system have to be weighed against the benefits it can return.

Costs of control include the following factors:

(1) Monitoring and processing systems — such as computers and cash registers;

(2) Personnel to operate the system—such as inventory controllers, inspectors and accountants—as well as supervisors and line personnel and furnishing detailed information to them — such as cost, scrap, production, and personnel reports. The resources that will have to be spent may not return an equal or larger amount so as to justify control in some cases.

Information must be accurate if it is to be useful. This point is directly related to our discussion of feed forward controls, used in diagnosing a deviation. Since control systems are important indicators of progress and are the basis for corrective reactions, care has to be taken to ensure that control measurements are accurate.

Yet measurements are often imprecise, and errors are often made in interpreting and reporting control results. Controls that offer inaccurate assessments feed decision-makers the wrong input, which will cause them to produce, incorrect responses (lack of action or inappropriate action and the waste of resources that go with both).

For instance, a production manager may report that production goals are not being met because he does not have even manpower to work with. Investigation may, however, reveal that there was adequate labour available but the methods used were inappropriate. So control systems have to be as accurate as possible.

However, in reality we find that most managers base decisions on inaccurate information. In most cars the information received by higher management is inaccurate. And in the absence of adequate measurement and reporting of performance, higher management may take inappropriate action. In short, the accuracy of control systems goes a long way to prevent damaging outcomes.

The control process should be simple so that it can be easily understood and applied. Complexity often means lack of understanding. Controls often become complex because various persons are responsible for creating, implementing and interpreting them.

Overlapping authority is likely to cause confusion and unnecessary duplication or multiplication of effort. Complexity can also result when control users focus on the mechanics and techniques of control to the complete neglect of the purposes of controls. This usually happens when one control leads to another.

Moreover, refinements in reporting procedures often lead to additional controls and more control procedures. The result is huge accumulation of data, which may obscure the purposes behind the controls and to sidetrack control efforts.