After reading this article you will learn about the relationship between planning and control.

Control, a process which ensures actual performance to be in conformity with planned performance draws important link between planning and control. Planning frames organisational goals and objectives. For effective implementation of plans and achievement of goals, organisation structure is designed, official positions are staffed with people and training, motivation and leadership facilities are provided.

Once the plans are implemented, workers initiate the production activities. In doing so, they face problems which are solved by the supervisors or go unnoticed. The problems that go unnoticed may accumulate into major problems and affect the entire planning process. This may mean — starting from the scratch.

All physical, human, financial and information resources used in framing the plans go waste, production schedules are disturbed, companies may lose markets, labour turnover rate may become high, companies may, in fact retrench the work force. In worst situations, the company can go into liquidation.

To save enterprises from these problems, managers continuously perform the control function to ensure that planned activities are actually happening. There is constant follow up of activities to make things happen according to plans. “It means we must invest in developing a system for monitoring deviations from plans when they are occurring so that adjustments and corrective actions can be taken.”

Planning is the first managerial function of initiating action followed by organising and directing people and resources to get the work done and controlling is the last function which ensures that actions initiated have actually helped in the attainment of goals. Planning starts the process of management and controlling completes that process. Controlling function is directly related to planning; managers monitor the results to achieve targets laid in the plans.

Controlling provides feedback to the plans by pointing exceptions or variations in the planned performance. It is largely the exceptional cases that are brought to the notice of managers so that future plans can be altered.

Other managerial functions — organising, staffing and directing, are intermediate and performed according to plans. Control function evaluates the present and takes action to regulate the future. It prevents occurrence of undesirable actions in future.

Past cannot be controlled but it guides to prevent occurrence of undesirable events in future. It, thus, helps in making better plans for future devoid of deviations detected in the current plans. Control is, thus, both looking back and looking ahead.

Relationship between planning and control can be understood as follows:

1. Planning identifies actions and controlling ensures that actions are carried out.

3. Controlling helps in revising or reframing the plans.

Relationship between planning and control can be represented as follows: 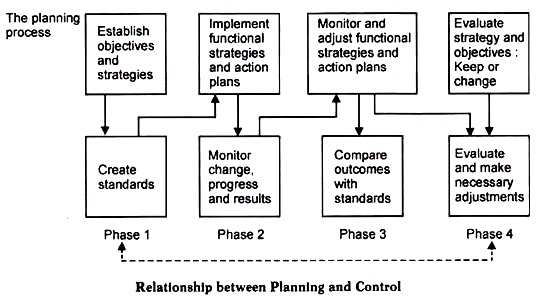