Growth of Multi-Channel System of Distribution:

Before we discuss about the ‘multiple-channels’ of distribution stra­tegy/policy adopted by a firm and the possibilities of conflicts among than, we should know about the various channels of distribution existing as a part of the normal trading operations.

This is illustrated by a chart below: 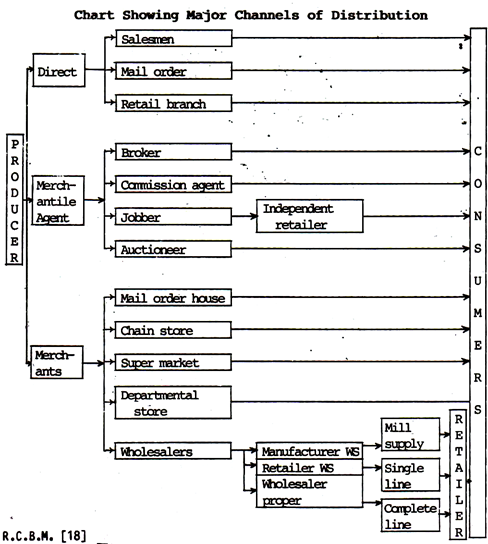 A question arises why a multi-channels distribution system is adopted.

The arguments in favour of this system are:

(i) Wholesalers exploit the consumers by not performing their functions efficiently,

(ii) They do not give the marketing information necessary for the manufacturer,

(iii) They do not supply the technical information necessary for the custo­mers and often mislead them,

(iv) They do not pay adequate attention to the manufacturer’s goods and instead promote the sales of the competitor’s goods, and

(v) They do not take pains in promoting new products of the manufacturer as- a result of which prospective customers remain ignorant of such goods. These drawbacks found in following a single-channel system have prompted many reputed firm to adept multiple channels of distribution.

The channel conflict, is the autocue of the above reasons. It is the conflict between the manufacturer and the channel which is sought to be eliminated. The wholesaler is unhappy and irritated when he is eliminated and the manufacturer sells directly as well as to the retailers.

The channel conflict in a multi-channel system of distribution arises when:

(2) Installation or after sales service is necessary;

(4) Wholesalers and retailers do not have common objectives with the manufacturer;

(5) Same product has to be sold to different types of customers, e.g. selling industrial goods through agents and company showrooms;

(6) The manufacturer desires to increase profits; and

(7) Wholesalers do not cooperate with the manufacturer or are ineffi­cient; etc.

Multiple channels will continue in future and hence, the battle will also continue. Such conflict will not step because it is inherent in the marketing system. For the purpose of minimising conflicts, many leading companies impart training to the dealers and their salesman.

They also assist in display of products, adver­tising materials, assortment of goods and so on. Also they give extra dis­count facilities to motivate them. Above all, they are committed to long- term relations with dealers rather than being concerned with only today and tomorrow. The dealers, in turn, must actively support the manufacturer’s programmes and be committed to strategic issues and strategic thinking.

The usual conflict that is inherent between the concerned parties can be resolved by better understanding and cooperation. If the wholesalers and retailers operate their business efficiently and cooperate with the manufacturer, much of the conflict can be avoided.

Strategy of the Channels of Distribution:

A manufacturing company should developments strategy of the channels of distribution having regard to:

(7) Characteristics of middlemen and

In the final analysis, multiple channel strategy is inherent in the present marketing and economic system.

In the development of channel stra­tegy that will resolve or at-least reduce conflicts are:

(i) To give higher discounts to the middlemen,

(ii) To arrange for training of salesmen,

(iii) To arrange for dealers’ conference or seminar,

(v) To advise about inventory, window-display and demonstration, etc.