After reading this article you will learn about:- 1. Meaning of Middlemen 2. Importance of Middlemen 3. Types 4. Functions.

Middlemen specialize in performing activities that are directly involved in the purchase and sale of goods in the process of their flow from producers to the ultimate buyers. Their position is between the producers and ultimate buyers.

Producers see them as extensions of their own marketing organisations, if such persons would not have been in existence, their own organisations would have to earn on all negotiations leading upto sales to ultimate buyers who in turn consider middlemen as sources of supply and points of contact with producers.

Middlemen can be classified into two divisions. They are merchants and agents. A Merchant buys and resells goods while an Agent negotiates purchases or sales or both but does not buy the goods in which he deals.

Hence the difference between the two lies in the ‘title of goods’ he handles. If he does, then he is a merchant otherwise he is an agent. Merchant does buying and reselling but agent may specialize in negotiations of either selling or buying transactions.

Some people say “Middlemen and Agents are nothing but social parasites and the sooner they are eliminated the better for the society.” In our own opinion to say like that is not just, because in the age of ‘division of labour’ and ‘specialisation’, the existence of middlemen is a must.

With the rapid development in the field of business activities, the business of today is not confined to a village or a city or a state. In this situation, it is not possible for producers to have direct contact with the consumers. Thus we say that middlemen today play a vital role in the transfer of goods from the producers to the consumers and moreover an important link between producers and ultimate consumers. 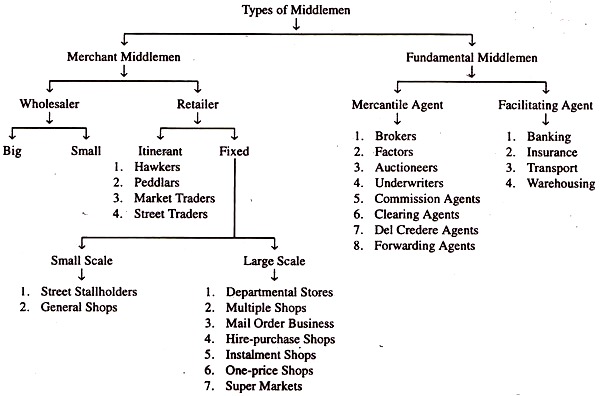 1. Middlemen are the furnishers of valuable information to the producers about consumer behaviour, the changes in tastes and fashions, etc.

2. Middlemen allow the manufacturers to concentrate on production only and relieve them from the botheration of marketing.

4. They make available the goods according to the consumers’ needs, fashion, tastes, etc.

5. Middlemen are an important link between the producers and consumers.

Thus we can very safely say that the middlemen play a very vital role in the business activities and to maintain the regular chain of supply of goods from the manufacturers to the ultimate consumers, the existence of the middlemen is very essential.