2. Manager has to Achieve a Balance among Competing (and often conflicting) Goals:

At a particular point of time, a manager is usually faced with diverse organisational goals, problems and needs. All these compete for the manager’s valuable time and resources (both human and non-human). Since the total stock of resources of an organisation is much less than the total demand for resources, each manager must strike a balance between diverse goals and needs.

This explains why most managers assign priorities to their various tasks to be fulfilled in a single day. The things which can wait are tackled later. This is a step towards efficient utilization of managerial time. (Time management as a separate discipline has assumed importance of late.)

The manager has also to take another important decision. He has to decide who is to perform a particular task, assigning each task to the most competent person. Tasks should be so defined and assigned that it is performed most efficiently and effectively.

3. The Manager is a Conceptual Thinker:

A manager is basically an analytical thinker inasmuch as he (she) must be able to think a specific, concrete problem through and must suggest a feasible solution to it. But what is more important is that he is also a conceptual thinker. He must so work as to achieve not only goals of his own unit or division but also the larger organisational goals.

4. The Manager Works with and through other People:

5. The Manager also Acts as a Channel of Communication within the Organisation:

Managers often work together to assist one another on a reciprocal basis by providing accurate information needed to perform the tasks. Managers also find it necessary to work out plans to achieve them.

6. The Manager is a Mediator:

Since organisations consist of human beings, there is often interaction among them. This, in turn, often leads to quarrel or disagreement among efficient people. If there is dispute within a division or organisation the morale of the employees is likely to be impaired and productivity of the total organisation is likely to suffer.

It may also cause exodus of competent managers from the organisation. So the manager has to settle a dispute as and when it occurs. This requires skill and tact. A careless manager cannot handle such disputes properly and can only accentuate the problem. The cure may be worse than the disease. A good manager is a harbour in the storm of office work. A bad manager is a storm in the harbour!

7. The Manager is a Politician:

Politics is the art of possible, while management is the art of business realism. It is one of the tasks of the manager to use, like a politician, the arts of persuasion and compromise to achieve organisational goals.

8. The Manager is a Diplomat:

The manager is supposed to be an official representative of his (her) divisional or department at or­ganisational meetings. He is also considered to be the representative of the whole organisation when he deals with clients, customers, con­tractors, Government departments and personnel of other organisa­tions.

Organisations do not always run smooth. There are always prob­lems of different types: financial difficulties, problems with employ­ees, or even differences of opinion concerning organisational policy. It is the task of the manager to come up with effective solutions to diffi­cult problems.

In case of necessity some steps which may be unpopular with some persons may also be taken in the interest of the whole organisation. An obvious example of such an unpopular step may be the dismissal of an employee. The manager has to take decision regarding this on the basis of its probable impact on the morale of the whole group.

An economist defines money by saying that money is what money does. In a like manner, a writer on management would say that ‘manager is what a manager does’. And, we have just noted that a manager performs a number of functions at the same time.

However, what is of paramount importance here is that managers need to change their roles frequently and must be alert to the particular role needed at a given time. This point is illustrated in Fig. 1.8. In the past the function of management was consideration as less important than that of technical personnel.

But it is of permanent importance to the success of an organisation. The ability to recognise the appropriate role to be played and to change roles as and when needed is the hallmark of a good manager. 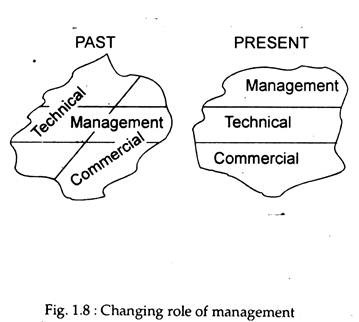