After reading this article you will learn about the managerial, interpersonal, informational and decisional roles of a manager in an organisation.

Managerial Roles of a Manager:

While analysing the nature of managerial work, Henry Mintzberg, by closely observing the day-to-day activities of a group of chief executive officers (CEOs), suggested that the formal authority granted to managers by the organisation is accompanied by a certain degree of status. This status serves a very useful purpose — it facilitates interpersonal relationships with superiors, peers and subordinates.

These individuals, in their turn, provide managers with the information they need to make rational decisions. From his own empirical studies and incisive analysis he concluded that managers play several different roles and these roles fall into three broad categories: interpersonal, informative and decisional.

Each can be further sub-divided into various sub-categories. As Fig. 1.10 shows there are three interpersonal roles, three informational roles and four decisional roles. 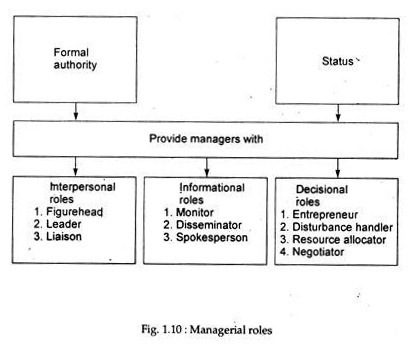 Interpersonal Roles of a Manager:

In this role, the manager is supposed, formally or informally, to show subordinates how to do things (or perform specific tasks), how to work under pressure {i.e., under strains and stresses) and how many hours a company person should devote to accomplish a particular task (or perform a particular function).

Finally, managers have a public relations role or a liaison role — dealing with people outside the organisation on an ongoing basis. For example, the manager has to establish and maintain a good working relationship with the representative(s) of a key supplier.

This enables the manager to obtain supplies of strategic resources (inputs) in times of shortage so as to ensure uninterrupted production and thus enable the marketing (sales) department to execute an order on time.

Informational Roles of a Manager:

In this context, the manager’s business role is to act as a monitor. He has to constantly and actively seek information which may be of value. This may be accomplished by questioning subordinates, by being receptive to unsolicited information and by being as well informed as possible regarding both the internal and external environment of business.

The manager’s second informational role is that of a disseminator of information. Since proper decision­ making is based on two-way flow of information (both feedback and feed forward), it is an important task of the manager to transmit relevant information back to others in the workplace.

In this age of information, revolution any managerial communication has assumed much more importance than in the past. Information input is so important today due to the emergence of a new clan of organisational people in the last few years, viz., the knowledge workers. And in his combined roles of monitor and disseminator, the manager emerges as a vital link in the organisation’s chain of communication.

The third informational role relates to external communication. In this role, the manager acts as a spokesperson. He has to deal with people outside the unit or outside the organisation. For example, it is the task of a plant manager to transmit information to top-level managers, so as to enable them to be better (or fully) informed about the activities of the plant.

Alternatively, the manager may represent the organisation before a pressure group like a Chamber of Commerce, or trade association, or even, consumer group.

It may apparently seem that the roles of the manager as figurehead and spokesperson are similar. But a close look reveals that there is one basic difference between the two. While acting as a figurehead, the manager presents himself as a symbol of the organisation. But when the manager acts as a spokesperson, he carries information and communicates to others in a formal sense.

Decisional Roles of a Manager:

Four such decisional roles can be identified:

Firstly, the manager fills the role of entrepreneur, who initiates change voluntarily. For example, the manager may initially recognise a problem or identify an opportunity to be exploited. In the second step, he(she) may initiate a change to tackle the situation.

In his second decision role, the manager acts as disturbance handler. He has to tackle the problems created by others such as strikes, input shortages, false advertising or violation of copyright.

The manager has also to act as a resource allocator. Two main resources are money and time. So, it is the task of the manager to rationally allocate funds in the unit’s operating budget among the unit’s members and projects.

The manager has also to allocate his time in the performance of different tasks and in guiding Organisational people. In short, in his role of a resource allocator, the manager has to decide who in the unit will be given various parts of the unit’s resources and who will have access to the manager’s time.

Finally, in his decision-making role as a negotiator, he has to enter into negotiations as a representative of the company. For example, managers may negotiate a three-year wage contract with the union, an agreement with a consultant, or a long-term relationship with a supplier.

Negotiations may also be internal to the organisation. For example, it is the duty of the manager to mediate or dispute between two subordinates or negotiate a certain level of support from another department.