A currency swap is a “contract to exchange at an agreed future date principal amounts in two different currencies at a conversion rate agreed at the outset”.

During the term of the contract the parties exchange interest, on an agreed basis, calculated on the principal amounts.

A currency swap is a legal agreement between two parties to exchange the principal and interest rate obligations, or receipts, in different currencies.

The transaction involves two counter-parties who exchange specific amounts of two currencies at the outset, and repay them over time according to a predetermined rule that reflects both the interest payment and the amortisation of the principal amount.

Currency swap allows a customer to re-denominate a loan from one currency to another.

The re-denomination from one currency to another currency is done to lower the borrowing cost for debt and to hedge exchange risk.

The concept behind is to match the difference between the spot and forward rate of any currency over a specified period of time.

Usually, banks with a global presence act as intermediaries in swap transactions, helping to being together the two parties. Sometimes, banks themselves may become counter-parties to the swap deal, and try to offset the risk they take by entering into an offsetting swap deal.

Alternatively, banks can hedge themselves by taking positions in the futures markets.

Here, in both the cases, the intermediary Bank is same which might bring the two companies together in a parallel loan arrangement as follows:

(i) U.S. based Company can extend loan of 5 million dollars for a period of 8 years to the German Company’s sister concern based in U.S.

(ii) Simultaneously, the German company can lend 5 million dollars for a period of 8 years to U.S. based company’s counterpart in Germany in Euro.

The parallel loan was the antecedent to currency swap.

A retail investor in Europe is prepared to invest in a well-known U.S. Company making it cheaper for such a borrower to raise debt in Europe than in the U.S. domestic markets. Tax or other regulatory restrictions may also entice borrowers into a currency, which can then be swapped into the currency originally desired. Currency swaps are usually used in subsidized export financing and also used to diversify exchange exposures. Available at one time arrangement fee paid upfront it helps a company to reduce overall exposure as well as reduce borrowing cost.

A Company Forex portfolio comprises of a major weightage to Pound against which the rupee has fallen heavily right through them the company may swap to say Japanese Yen a part of its exposure and at the end of the period repay principal in Pounds. Overall economies may be available to a company in the form of reduced interest payment on the Japanese Yen vis-a-vis the Pounds.

Thus lower borrowing cost can be achieved versus borrowing the currency directly and to spread out exchange exposure by swapping to a basket of currencies. Currency swaps are usually used in subsidized export financing and also used to diversify exchange exposures. Available at one time arrangement fee paid up-front, it helps a company to reduce overall exposure as well as reduce borrowing cost.

The following types of cross-currency swaps are generally used:

In this form of swap, it may involve exchanging fixed interest payments on a loan in one currency for fixed interest payments on an equivalent loan in another currency. It is not necessary that the actual principal be swapped. Sometime, an alternative currency can be exchanged at spot into desired currency, however the principal amounts are always re-exchanged at the maturity of the swap.

The currency swaps involve an exchange of liabilities between currencies.

A currency swap can consist of three stages:

1. A spot exchange of principal – this forms part of the swap agreement as a similar effect can be obtained by using the spot foreign exchange market.

3. Re-exchange of principal on maturity.

In a currency swap the principal sum is usually exchanged in one of the following manner:

(ii) At a combination of start and end

An interest rate swap is a simple agreement between two parties to exchange series of interest payments on an underlying loan.

There is no exchange of principal amount and an independent silent financial transaction takes place which does not affect the lender.

Thus, in such a transaction, interest payment streams of differing characters are exchanged according to predetermined rules, and are based on an underlying notional principal amount.

Interest rate swaps can take different forms as they can be structured to meet each corporate’s specific requirements.

A ‘fixed-to-floating swap’ changes the profile of your foreign currency borrowings from fixed to floating rates, or vice versa. Ideally, to minimize the interest rate risk over the life-span of the loan, a corporate should move from a floating to a fixed rate term at the bottom of an interest rate cycle, and do the opposite at its crest.

A ‘coupon swap’, which is also known as an ‘interest-only swap’, is an agreement between two parties to exchange their interest rate obligations denominated in different currencies. For instance, if the interest rates on the US dollar are expected to rise, a company with dollar borrowings may wish to switch its interest payments to another currency whose interest rates are expected to be lower.

When a company borrow to advantage with one type of financing but really prefers another, its sources will engage in a swap with an interest rate swap, interest payment obligations are exchanged between two parties, but they are denominated in the same currency.

The most common swap is the floating/fixed rate exchange.

The popular form of interest rate swap is a ‘plain vanilla’ swap, in which fixed and floating interest payments are based on some notional principal amount.

Using the principle of comparative advantage, both parties could benefit from a swap arrangement, whereby:

(c) Both the companies agree a rate for swapping their interest commitments. 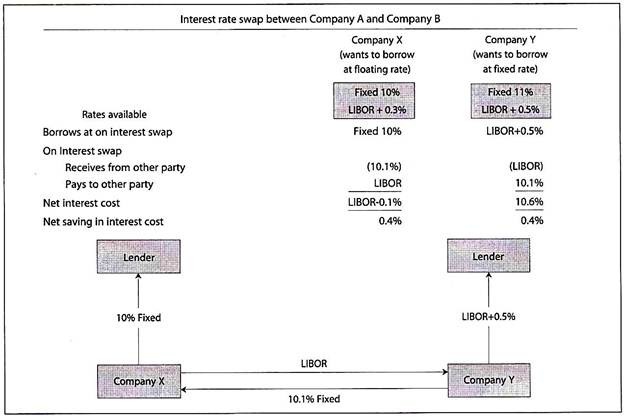 From the above swap deal, both the companies benefit from lower interest costs.

1. Currently swaps enable corporate to exploit their comparative advantage in raising funds in one currency to obtain savings in other currencies.

2. Currency swaps permit corporate to switch their loans from a particular currency to another depending on their expectations of the future movement of the currency and interest rates.

3. It offers flexibility to corporate seeking to hedge the risk associated with a particular currency.

4. A company no longer has to live with a bad decision, if it has selected a wrong currency for its overseas funding operations, a currency swap can undo the damage.

5. Currency swap can be used to lock into exchange rates for a longer period and it do not require monitoring and reviewing.

6. The currency swap mode can be chosen to restructure the currency base of companies liabilities.

7. Currency swaps are used to hedge exposure to currency risk on future receipts (asset swaps) and payments (liability swaps), and to raise funds at a lower cost.

8. A high degree of liquidity in currency swap market ensures a steady supply of principals ready to assume the opposite side of a transaction.

9. In a currency swap, the exchange rates at maturity is known at the outset.

10. Early termination of swap contracts may be possible by agreement of the counter parties.

11. Currency swaps can be entered into at any time during the life of the transaction, they are being used to hedge.