This method suggests that the firm should not involve in a transaction which exposes the firm to risk or make sure that the firm does not suffer if it necessitates to enter into such transaction. In transactions involving foreign exchange, the movement of exchange rates on either direction is common. The firm should take the advantage of favourable situations to smooth out the adverse fluctuations.

It is a contractual arrangement between the buyer and seller who agree in advance to share any fluctuations in foreign exchange rate movements. This method suggests the establishment of long-term relationship between the parties. If the fluctuations exceed the desired levels, the parties may renegotiate for sharing.

The exporting firms can maintain separate bank accounts for each currency in which it transacts and delay the conversion into home currency until favourable situation to take place. The major drawback of this method is that liquidity problems arise if funds are kept for long time waiting for favourable situation.

The profits are transferred through an adjustment of invoice prices of transactions that take place between parent and subsidiary or between strong currency and weak currency subsidiaries. This mode of adjustment will not adversely affect the subsidiaries which are operating in a troubled economic environment.

It is a method whereby the exporter sells the export bills to the forfeiter and obtains cash. Money comes to the exporters even before the collection of exporter’s debts. Forfeiter, after having made payments to exporters become sole owners to collect the debts and assume full risks.

Technique # 7. Discounting of Bills of Exchange:

The company which sells goods on credit, will normally draw a bill on the buyer who will accept it and sends it to the seller of goods. The seller, in turn discounts the bill with his banker. The banker will generally earmarks the discounting bill limit.

When a company has an outstanding foreign currency payable or receivable, it may choose to hedge against the currency risk by using the forward/money markets.

It shifts the currency risk to the investor by adding a currency swap option to the basic Eurobond. For the investor, the option to convert Eurobonds to rupee debt that offers rupees rates of interest will be in the money if the interest rate differential outweighs the risk of currency depreciation. Such a conversion will, no doubt, hike interest costs, but it eliminates the foreign exchange risk.

Technique # 10. Selling and Buying in One’s Own Currency:

The company simply invoices all its supplies in its own currency. The exchange rate risk is not eliminated in this case, but transferred to the customer. To avoid the transaction risk, a firm can buy and sell goods and services in the currency of its own country, thereby the exchange rate risk is avoided or minimized. By trading in this way it would be transferring risk to the other party to the transaction.

It is a widely used technique for centralization of exposures. The manufacturing subsidiaries ship directly to the sales subsidiaries, but bill to a separate entity, the re-invoicing company. 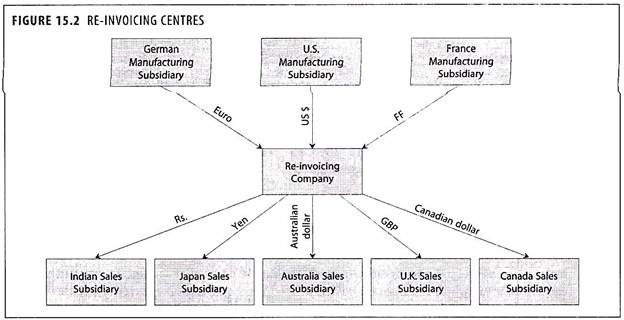 The re-invoicing centers bills the sales subsidiaries in different currencies. The risk of currency exposure is now concentrated only with re-invoicing company. The manufacturing subsidiaries will receive a stream of cash flow in their own currency without exposure to foreign exchange risks.

The foreign exchange rate risk can be eliminated or reduced, if the company which is having exposure to receipts and payments in the same currency. The company can offset its payments against its receipts if it can plan properly. This can be managed by operating a bank account in overseas to offset the transactions.

The basic requirement for a matching operation is the two-way cash flow in the same foreign currency is called ‘natural matching’. If the matching involves between two currencies whose movements are expected to run closely is called ‘parallel matching’. Matching can be applied to both third party and inter-company cash flows.

To mitigate translation risk, a company acquiring a foreign asset should borrow funds denomi­nated in the currency of the country in which it is purchasing the asset, matching if possible the term of the loan to the expected economic life of the asset.

To mitigate the transaction risk, a company selling its goods in USA with prices denominated in dollars could import raw materials through a supplier that invoices in dollars.

An Indian exporter exports finished goods to US firm and he will also import the raw material and packing material from the US firms. Then the receipts and payments transactions can be offset at the origin itself by operating a bank account in US for convenience.

The basic principle of portfolio theory is that a diversified mix of commodities is less risky than a single commodity. So long as currency movements are not highly correlated, conducting transactions in multiple currencies will reduce the impact of a sudden and substantial depreciation in any one currency. To protect from exchange rate risk, corporate will have to diversify their exposures by borrowing in different currencies or by importing from different countries. The firms will have to choose their borrowing currency carefully.