A non-deliverable forward (NDF) is a forward contract in which both parties decide on the forward rate, the currency pair, and the date of settlement. The NDF market evolved in countries in which there were currency controls. There are NDF markets for currencies of several Asian countries (Indonesia, Philippines, Korea and Taiwan), Eastern European countries and Latin American countries. Not all countries with capital controls have NDFs. There is no NDF market for the Malaysian ringgit or the Thai baht. Trading occurs in an offshore financial centre. Therefore, the NDF market escapes the regulatory control of the country whose currency is being traded.

The main features of an NDF are:

(i) The contract is for a notional amount and there is no delivery of currencies on the maturity date.

(ii) The contract is cash settled on the maturity date.

(iii) The fixing date is a day that is two business days before the settlement date.

(v) This amount is paid by one party to the other (usually in the US dollar) on the maturity date.

(vi) Two-way quotes are available from one week up to one year.

(vii) The AD imposes a penalty if the contract is cancelled by the other party.

In an option dated forward contract, both parties decide to exchange a currency pair at a pre-determined price, but between two pre-determined dates. The contract makes allowances for shipment delays, or uncertainty in delivery. It is ideally suited to a corporate customer who has a foreign currency receivable or payable but is not clear on the exact date on which the receipt (or payment) is due.

The important features of currency futures trading in India are:

i. Currency futures are traded online and prices are displayed on real-time basis.

iv. The trading symbols on the NSE are – USD/INR, EUR/INR, GBP/INR and JPY/INR.

v. The NSE levies an extreme loss margin at 1% of the MTM value of an open position.

vi. Futures contracts are available for up to 12 months, in multiples of one month. A new contract is introduced each month.

ix. The settlement rate is the RBI reference rate two days prior to the settlement date. Contracts can be settled in two ways – (i) Contracts open at expiry are cash settled in Indian rupees, on the last working day (excluding Saturdays) of the expiry month. The final settlement price is the RBI reference rate on the last trading day of the futures contract, (ii) MTM settlement occurs at the end of each day. The daily settlement price on a trading day is the closing price of the futures contracts on that day.

The RBI granted permission to the NSE and USE for exchange-traded currency options on October 28, 2010. Residents of India were permitted to participate in this market, subject to RBI’s Exchange Traded Currency Options (Reserve Bank) Directions of July 2010. The currency options market is regulated by SEBI and RBI.

(ii) The bank has a minimum capital adequacy ratio of 10%.

(iii) The bank’s non-performing assets do not exceed 3%.

(iv) The bank should have earned profits in the preceding three financial years.

It also permitted banks to trade in currency futures. Banks in India can now undertake client-based trades, as well as proprietary trades in exchange-traded currency options. Banks could also undertake clearing of currency options and apply to the concerned stock exchange, to become trading members and clearing members.

Specific combinations of options are known by different names. For example, in a 3-month call option, both parties may agree that the buyer has the right to exercise the option on the 1st and the 15th of each month of the 3 months. This is called a Bermuda option. It is a combination of a European and an American option. Similarly, a look back option gives the buyer the right to buy (or sell) at the lowest (or highest) spot price from inception of the contract to the date of maturity.

(iii) The purchase of a put option and the simultaneous sale of a call option at different strike prices are called a cylinder.

(v) The purchase of a call and a put with the same strike price and the same expiry date is called a long straddle.

(vi) The sale of a call and a put with the same strike price and the same expiry date is called a short straddle.

(vii) The purchase of a call option and a put option with strike prices that are equally out of the money, is called a long strangle.

(viii) The sale of a call option and a put options with strike prices that are equally out of the money is called a short strangle.

A break forward is a combination of a forward and an option. It is a forward contract on currencies that is attached to an option contract to do the opposite for the same currencies, at a different exchange rate. For example, a forward contract to buy US dollars and sell British Pounds at a specified forward rate (say $1.17/£), is attached to an option to sell US dollars and buy British Pounds at another rate ($ 1.19/£).

A kick in forward is an option which automatically becomes a forward contract when the spot rate reaches a particular pre-determined rate. Suppose the pre-determined rate is Rs. 39.55/$.The exercise price on a three-month call option entered into on 10th June, with a maturity date of 10th September, is Rs. 39.50/$. If the INR/USD spot rate reaches Rs. 39.55/ USD on 20 July, the contract becomes a forward contract.

Options Specifications on the United Stock Exchange (USE):

In the money, at the money and out of the money European call and put options on USD/ INR began trading at the end of October 2010.

i. The US dollar-Indian rupee spot rate is the ‘underlying’. The lot size is 1 contract. Each contract is for $1,000. The outstanding position is in USD.

ii. The option premium is in rupee terms and must be paid by the buyer to the exchange in cash, which in turn hands over the premium to the seller.

iii. Spot months are March, June, September and December. Each contract is traded up to two working days prior to the last business day of the expiry month at 12 noon. The exchange adopted the same holidays as those declared by FEDAI.

v. The exchange levies an initial margin and an extreme loss margin. Both margins are deducted by the exchange online.

vi. Contracts are settled in cash in Indian rupees, on the last working day of the expiry month. On that date, all open ‘in the money’ contracts are assumed to have been exercised at the final settlement price. Table 5.7 shows the contract specifications for currency call options as per the RBI reference rate of October 29, 2010. 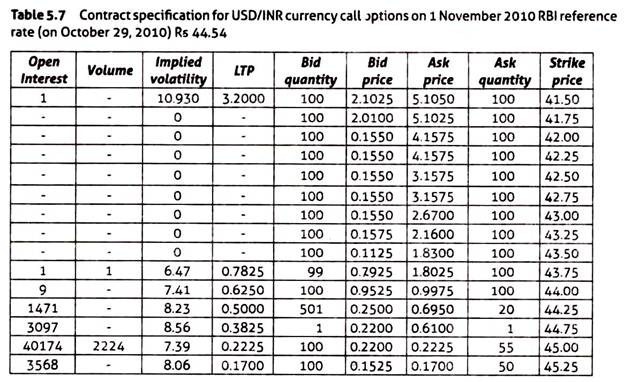 1. An options contract in different spot months can have the same strike price.

3. For a given spot month, the option premium decreases for a call options contract.

4. For a given spot month, the option premium increases for a put options contract.

There are different types of swaps in the foreign exchange market. A coupon only swap is also called an annuity swap. Only the interest payments in two different currencies are exchanged and there is no exchange of principal.

A forward start swap is a deal which gets activated after a ‘deferral period’ mutually agreed upon by both parties. It is also known as a delayed start swap. For example A’ enters into a two-year swap deal with ‘B’ on January 10, 2011, with a deferral period of three months. The trade date is January 10, 2011. The two-year period is counted from April 10, 2011. The maturity date is April 10, 2013.

A spot-forward swap is a swap of a currency pair in the spot market and another swap (of the same currency pair) in the forward market. Both transactions are bilaterally negotiated by the same parties, and entered into on the same day. For example, a dealer buys $10 million in exchange for Euros in spot market from Bank XYZ. The swap of dollars for euros takes place immediately. The dealer simultaneously sells the $10 million in exchange for euros back to Bank XYZ in the forward market, for delivery three months hence. The swap occurs at a pre­determined future date, three months later. This is a Spot-forward swap.

A forward-forward swap is a swap consisting of two deals in the forward market but with exchange of currencies at two different and pre-determined dates in the future. A dealer sells $10 million forward for delivery in one month at an exchange rate of €1.17/ $, and simultaneously buys $10 million forward for delivery in two months at an exchange rate of €1.16/$.

Cross-currency interest rate swaps are of different kinds depending upon the structuring of the swap deal:

i. In a fixed for fixed swap, both parties pay a fixed interest rate. It. is fixed for fixed callable swap, when one of the parties has the right (but not the obligation) to cancel the swap after a certain date, or at a certain time.

iii. In a basis swap, two parties exchange floating interest rate commitments. Each party has an existing floating interest rate payment linked to a different benchmark. The exchange is done to match the return on assets with the return on liabilities. It is also called a floating for floating swap. Suppose a company has assets that earn a return (in British pounds) linked to a three-month LIBOR, but has a liability on which it has to pay interest (in US dollar) linked to six-month LIBOR. It goes in for a cross-currency basis swap, by taking a British pound-denominated three-month LIBOR linked interest rate swap.

iv. A cross-currency swaption is an option on a swap. The buyer of a swaption buys the right but not the obligation to enter into a cross currency swap with the seller.

v. A contingent swap is one which is activated when interest rates reach a pre-specified level.

vi. In a reversible swap, one of the parties has the option to alter the payment basis (from fixed to floating) after a certain period.

vii. In a zero for floating swap, one party accepts the other party’s payments (in another currency) of a floating interest rate.

viii. In a puttable swap, the party that is paying a fixed rate of interest has the right but not the obligation, to cancel the swap on or after a certain date. It combines a swap with the buyer’s position in an options contract.

ix. In an extendable swap, the party that is paying a fixed rate of interest has the right but not the obligation to extend the swap for a pre-determined period. An example is a two- year swap agreement extendable for one year.