The law of one price asserts that when there are no significant costs or other barriers associated with moving goods or services between markets, then the price of each product should be the same in each market. The identical goods must sell at the same price in different markets, after adjusting for the exchange rate.

The law of one price states that, for tradable goods and services, the:

The supply of money depends on factors like government policy, efficiency of financial institutions, customs and habits within the country. Interest Rate Parity is concerned with the difference between the spot exchange rate and forward exchange rate between two currencies.

When currency and money markets are in equilibrium, and difference in interest rates available through investment in two separate locations should correspond to the differential between the spot rate and forward rate. The currency with higher interest rate will be sold at a discount in the forward market against the currency with the lower rate of interest.

The reason that these relationships hold is that operators in the money market are free to invest or borrow in the currency that offers them most favourable interest rates. When interest rate parity exists, the forward rate differ from spot rate by just enough to offset the interest rate differential between the two currencies.

The interest rate parity relationship can be expressed in the formula given below:

if = Interest rate of foreign country

The above equation can be simplified as follows:

The current bank interest rate of U.S. and India are 4.5% and 8.5% respectively. The present spot market rate of exchange in 1 US $ is Rs.62.10. What would be the twelve month forward rate?

... Current twelve-month forward rate of rupee against dollar is Rs.64.477

An approximation of Interest Rate Parity Relationship is given below:

The equilibrium relationship that operates under Interest Rate Parity Theorem can also be given in the following way:

An Indian exporter is due to receive Euros 1,00,000 in six months’ time for goods supplied. The company decides to hedge its currency exposure by using forward market. The short-term interest rate of U.K. and India are 4% and 8% per annum respectively. The spot rate of exchange is Euro 1 = Rs.78.20. Calculate the 6 months forward rate of Euro.

For example, if the rate of inflation in India is higher as compared to U.S., then the relative exchange rate of Rupees to U.S.dollars is bound to be lower. The purchasing power parity theorem is based on law of one price. The theorem asserts that the differences in inflation rates between countries will affect the movements in the exchange rate.

The above formula can be simplified as follows:

The limits to free trade of goods are many.

The larger limits are:

Expensive freight costs from one market to another market may cause a difference in the two market prices.

These goods may not keep for long without extra care or cost being borne for them to sell in another market.

Utility of two real estates is not the same. Neither can two pieces of land qualify for exchange.

The above are the reasons for the anomaly noted in the purchasing power parity theory in practice. As a practical matter, a relative version of PPP has evolved, which states that the changes in the exchange rate over time is determined by the difference in the inflation rates of the two countries.

It is expected the inflation rates in India and U.S. are 6% and 3% respectively. The present spot rate of US $1 is Rs.62.10. What will be the expected spot rate in twelve months’ time?

The formula given for purchasing power parity can be rearranged to give a method of predicting forward exchange rate as follows:

The inflation rates of India and U.S. are 8% and 3% respectively. The spot rate between U.S. dollar and Indian rupee is $ 1 = Rs.62.10. Calculate twelve months forward rate.

Irving Fisher (1930) in his book ‘The Theory of Interest’ established that in equilibrium lenders will receive a nominal rate of interest equal to real interest rate plus an amount sufficient to offset the effects of expected inflation. The real rate of return is the rate at which borrowing and lending in the financial markets are in equilibrium.

The real rate of return is equal to the real rate of growth in the economy, and it reflects the preference of market participants between present and future consumption. The rational lenders will expect consumption not only for waiting for their money, but also for the likely erosion of real purchasing power.

The real and nominal interest rates are connected by Fisher Effect as follows:

The law of one price lead us to the conclusion that the real interest rate (ignoring inflation) should be the same in any country assuming deposits with a similar level of risk. If investors could move their funds freely from one country to another, they would move towards countries where they could expect to obtain the highest real rate of interest (nominal rate of interest less the inflation rate) with competition to attract funds, that would mean that the real rates of interest would move so that they were equal in all countries.

The equation representing Fisher Effect, if real interest rates are equal in all countries, then:

The interest rates of India and US are 15% and 10% respectively and the inflation rates are same in both the countries. The investors will move their money from US to India.

If the inflation rate in India is expected to be 10% and in US it is only 4%. The investors can earn greater return in US. India would need to raise its nominal interest rates to 16% in order to prevent investors taking their funds out of country.

The International Fisher Effect relationship is expressed as:

The relationship can be further simplified as follows:

The International Fisher effect implies that the exchange rate is directly linked to nominal interest rates.

Integration of IRP and PPP Theorems: 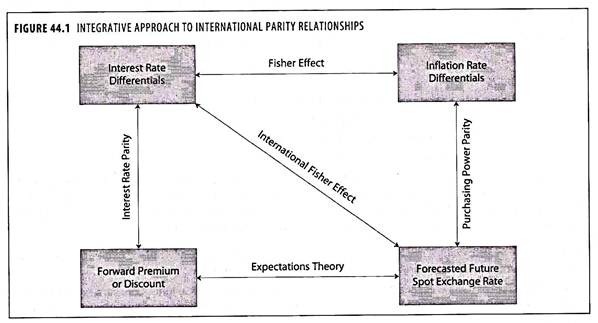 Integrating the interest Rate Parity (IRP) theorem and Purchasing Power Parity (PPP) theorem, it can be expressed as follows: