The formation of a company is a lengthy process. For convenience the whole process of company formation may be divided into the following four stages: 1. Promotion Stage 2. Incorporation or Registration Stage 3. Capital Subscription Stage 4. Commencement of Business Stage.

Promotion is the first stage in the formation of a company. The term ‘Promotion’ refers to the aggregate of activities designed to bring into being an enterprise to operate a business. It presupposes the technical processing of a commercial proposition with reference to its potential profitability. The meaning of promotion and the steps to be taken in promoting a business are discussed in brief here.

Promotion of a company refers to the sum total of the activities of all those who participate in the building of the enterprise upto the organisation of the company and completion of the plan to exploit the idea. It begins with the serious consideration given to the ideas on which the business is to be based.

According to C.W. Grestembeg, “Promotion may be defined as the discovery of business opportunities and the subsequent organisation of funds, property and managerial ability into a business concern for the purpose of making profits therefrom.”

According to H.E. Heagland, “Promotion is the process of creating a specific business enterprise. Its scope is very broad, and numerous individuals are frequently asked to make their contributions to the programme. Promotion begins when someone gives serious consideration to the formulation of the ideas upon which the business in question is to be based. When the corporation is organised and ready for operation, the major function of promotion comes to an end.”

Incorporation or registration is the second stage in the formation of a company. It is the registration that brings a company into existence. A company is properly constituted only when it is duly registered under the Act and a Certificate of Incorporation has been obtained from the Registrar of Companies.

Procedure to Get a Company Registered:

In order to get a company registered or incorporated, the following procedure is to be adopted:

Before a company is incorporated, the promoter has to take decision regarding the following:

1. To decide the name of the company

(B) Filing of Document with the Registrar:

The specimen of certificate of incorporation is given below: 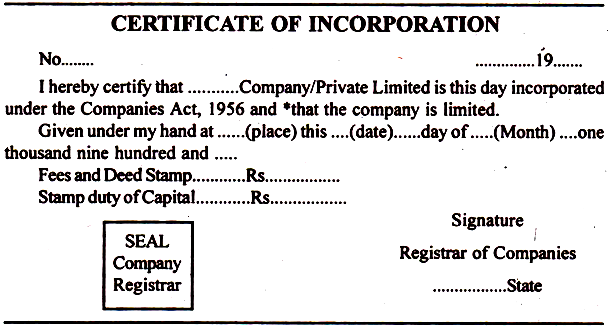 The certificate of incorporation is conclusive evidence of the fact that:

(i) The company is properly incorporated and duly registered;

(ii) The terms of the Memorandum and Articles are within the law;

(iii) All requirements of the Act in respect of registration have been complied with;

(iv) A private company can start its business after getting the certificate of incorporation; and

(v) With the issue of certificate, the company takes birth with a separate legal entity.

A private company or a public company not having share capital can commence business immediately on its incorporation. As such ‘capital subscription stage’ and ‘commencement of business stage’ are relevant only in the case of a public company having a share capital. Such a company has to pass through these additional two stages before it can commence business.

Under the capital subscription stage comes the task of obtaining the necessary capital for the company.

For this purpose, soon after the incorporation, a meeting of the Board of Directors is convened to deal with the following business:

1. Appointment of the Secretary. In most cases the appointment of pre-tem secretary (who is appointed at the promotion stage) is confirmed.

3. Adoption of draft ‘prospectus’ or ‘statement in lieu of prospectus’.

4. Adoption of underwriting contract, if any.

Besides the above mentioned business, the Board also decides as to whether:

(i) a public offer for capital subscription is to be made, and

(ii) Listing of shares at a stock exchange is to be secured.

The company will now proceed to obtain the permission of the Controller of Capital Issue, New Delhi, under the Capital Issue Control Act, 1947 if a public offer for sale of shares and debentures exceeding Rs. one crore is to be made during a period of 12 months, unless the issue fulfils the conditions of exemption as laid down in the Capital Issue (Exemption) Order, 1969.

The Capital Issue Control Act, 1947 however, does not apply to a private company, a banking company, an insurance company, and a government company provided it does not make an issue of securities to the general public.

Application for shares are received from the public through the company’s bankers and if the subscribed capital is at least equal to the minimum subscription amount as disclosed in the prospectus, and other conditions of a valid allotment are fulfilled, the directors of the company pass a formal resolution of allotment.

Allotment letters are then posted, return of allotment is filed with the Registrar and share certificates are issued to the allottees in exchange of the allotment letters. If the subscribed capital is less than the minimum subscription or the company could not obtain the minimum subscription within 120 days of the issue of prospectus, all money will be refunded and no allotment can be made.

It may be noted that a public company having a share capital, but not issuing a ‘prospectus’ has to file with the Registrar ‘a Statement in lieu of Prospectus’ at least three days before the directors proceed to pass the first allotment resolution.

After getting the certificate of incorporation:

(i) A public company issues a prospectus of inviting the public to subscribe to its share capital,

(ii) A minimum subscription is fixed, and

(iii) The company is required to sell a minimum number of shares mentioned in the prospectus.

After making the sale of the required number of shares a certificate is sent to the Registrar stating this fact, along-with a letter from the banks, that it has received application money for such shares.

The Registrar scrutinizes the documents. If he is satisfied, then issues a certificate known as Certificate of Commencement of Business. This is the conclusive evidence of the commencement of the business.

The specimen of certificate of commencement of business is given below: 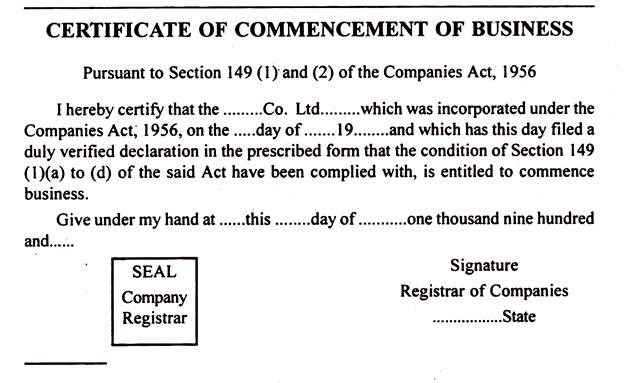 Restrictions on the Commencement of Business:

Section 149 of the Companies Act, 1956 has imposed some restrictions on the commencement of business by public companies, which are as follows:

1. Companies which issue a prospectus:

A company having share capital issues prospectus to the general public for subscription of their shares or debentures.

But this company cannot commence business or exercise borrowing powers unless the following formalities are complied with [Sec. 149 (1)]:

(i) The shares payable in cash have been allotted equal to an amount not less than the minimum subscription.

(ii) The directors have taken up and paid for the qualification shares in cash an amount equal to the amount payable by other subscribers on application and allotment.

(iii) No money is liable to become refundable to applicants, because of company’s failure to apply for, or to get permission for the share or debentures to be dealt in on any recognised stock exchange.

(iv) A statutory declaration duly verified by any one of the company should be filed with the Registrar stating that all conditions given above in (i), (ii) and (iii) have been complied with.

2. Companies which do not issue a prospectus:

A company which has not issued a prospectus must file the following documents with the Registrar or in other words, cannot commence the business unless the following formalities are complied with [Sec. 149 (2)].

(i) A statement in lieu of prospectus has been filed with the Registrar.

(ii) The directors have taken up and paid for the qualification shares in cash an amount equal to the amount payable by other subscribers on application and allotment.

(iii) A statutory declaration duly verified by any one of the directors or secretary of the company that the directors have taken up and paid for the qualification shares in cash an amount equal to the amount payable by other subscribers on application and allotment.

Directors of a Company: Meaning, Legal Status and Resignation
Conversion of a Private Company into a Public Company