In this article we will discuss about the meaning and classification of take over of a company.

Meaning of Take Over:

‘Take over’ means acquisition of a certain block of equity capital of a company which enables the acquirer to exercise control over the affairs of a company.

In theory, the acquirer must buy more than 50 per cent of the paid up equity of the acquired company to enjoy complete control. In practice, however, effective control may be exercised with a smaller shareholding, usually ranging between 10 per cent and 40 per cent because the remaining shareholders, scattered and ill organised, are not likely to challenge the control of the acquirer.

Sometimes the acquirer may have tacit support of the financial institutions, banks, mutual funds or venture capital funds, having sizable holdings in the company’s capital. The main objective of a takeover bid is to obtain legal control of the company.

Take-overs (Also Mergers) may be broadly classified into three categories as follows:

A horizontal takeover or merger is one that takes place between two companies which are essentially operating in the same market. Their products may or may not be identical. For example, if Tata Oil Mills is merged with Hindustan Lever, it is a case of horizontal merger as both the companies have similar products.

Similarly, a TV manufacturing company taking over a company manufacturing washing machines will also be a horizontal takeover because both the companies are in the market for consumer durables.

A vertical takeover or merger is one in which the company expands backwards by taking over of or merger with a company supplying raw materials or expands forward in the direction of ultimate consumer.

Similarly, if a cement manufacturing company acquires a company engaged in civil construction it will be a case of vertical takeover with forward linkage.

In a conglomerate takeover or merger, the concerned companies are in totally unrelated lines of business; for example, a steel company’s merger with a Spinning Company.

Conglomerate mergers/takeovers may bring about stability of income and profits since the two units belong to the different industries.

Acquisition may be defined as “a purchase of a company or a part of it so that the acquired company is completely absorbed by the acquiring company and thereby no longer exists as a business entity.”

From theoretical as well as practical points of view, a corporate acquisition process is a strategic planning exercise.

This process may be modelled as below: 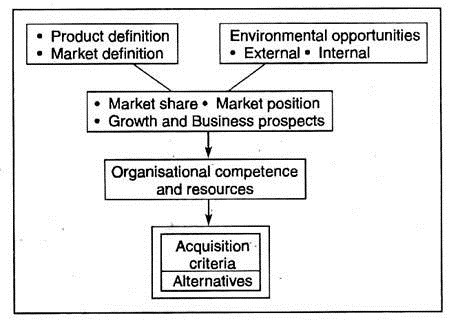