The different jobs, depending upon their requirements, responsibilities involved and their importance to the organisation, are ranked, graded or placed from top to bottom.

(a) The method is simple and fast.

(b) It can be easily mastered and administered.

(c) The method is suitable for small organisations involving lesser number of jobs to be evaluated.

(d) The method does not involve expenses.

(a) There is no commonly accepted base for deciding the ranks.

(b) The method is not very accurate.

(c) It is not useful for large organisations.

It is the least used method.

Jobs are classified or graded in groups or levels of equal skill, difficulty, responsibility, importance and other requirements. It may be a production job, a sales job or an office job; each job family can be broken into a number of grades.

For example, office jobs may be classified into six grades, namely graded A to grade F. Grade A involves simple tasks like sorting whereas grade F deals with those tasks which require high responsibility and judgment. Each grade carries an appropriate monetary scale.

(1) The method resembles Ranking method, is simple and can be easily mastered and administered.

(2) It is more accurate as compared to Ranking method.

(1) It is not useful for large organisations.

(3) The method does not involve detailed Job Analysis.

(4) Sometimes it is difficult to correlate the (classified) grade of the job with the present salary of the worker; he may be getting a wage higher than the one specified in the recently determined grade for him.

The various steps involved in the factor comparison method are as follows:

(1) Identify a few Key Jobs in the organisation and record their wages. Key jobs are those represen­tative jobs which are assumed to be correctly or fairly paid.

(2) Analyse the key jobs for each of the five factors mentioned above.

(3) Allocate the salary (paid for each key job) amongst the five factors in proportion to their require­ments, necessity or importance in the job, (refer Table 29.1).

(4) This formulates a money rating scale for each of the five factors. 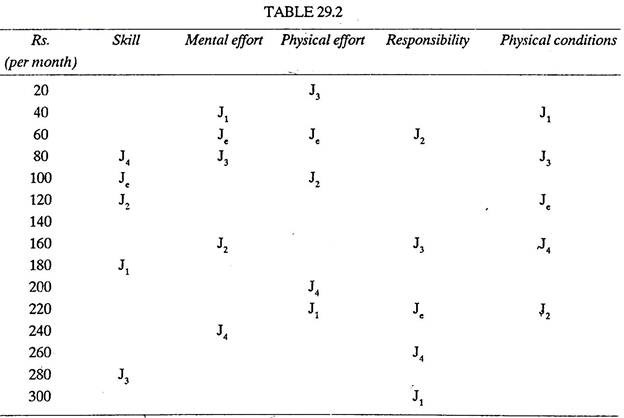 (6) Analyse the job to be evaluated into the five factors,

1. Factor comparison method finds the wages for a job from existing wage rates.

2. It finds wages by direct comparison.

3. For fixing wages for a new job, this method uses a ready-made Job Comparison (monetary) scale and thus the wages can be calculated speedily.

1. It is a complicated method; is not easily understood and hence it is less popular as compared to Point method.

2. Selection of unfairly paid jobs as key jobs can introduce considerable error in the wages calculated by this method.

3. It is difficult to divide each factor into a large number of sub-factors and unless done so, accurate results may not be achieved.

4. The method depends upon subjective judgment; different persons may attach different mone­tary values with each factor for the same importance.

The point method bases itself on dividing the jobs into a number of factors which in turn are further subdivided into grades or degrees. Each degree is awarded certain points and when such points for all the degrees are totaled they indicate the importance of the job in the organisation; consequently a suitable wage rate proportional to the total points is determined.

The steps involved in point method are given below:

(a) Select a few key jobs which can be taken as representatives of the jobs to be evaluated in the organisation. Key jobs are those which can be clearly defined and are fairly paid.

(b) Establish and define job factors whose number may vary between five to ten. Both, key jobs and the jobs to be evaluated should have common job factors.

A few job factors are listed below:

For the range of jobs to be evaluated, establish the importance of each factor and decide its weighting (i.e. points).

Table 29.3 shows weighting for different factors for an arbitrary job: 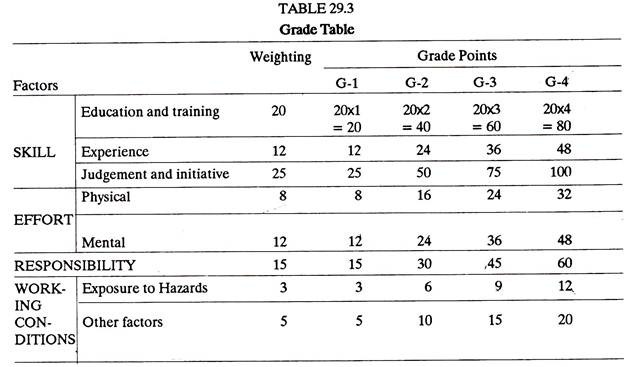 (c) Select and define grades or degrees for each factor mentioned under (b) above.

For example, the factor Education and Training may have the following degrees or grades:

(i) Degree in science with no training.

(ii) Degree in science with 2 years of training in the material testing lab.

(iii) Diploma in engineering with no training.

(iv) Diploma in engineering with 2 years of training in the material testing lab.

(vi) Degree in engineering with one year’s experience in the material testing lab.

Each grade is allotted certain points. The first and the last grades possess minimum and maximum points respectively. The total number of grades may vary from four to eight. An even number of grades is preferred as it avoids the natural tendency to select the middle grade.

(e) Break the (already selected) key jobs into factors and the factors into grades. Total up all the grade points for each key job.

Since the wage rate for each key job is fair and is known, plot the figure 29.1: 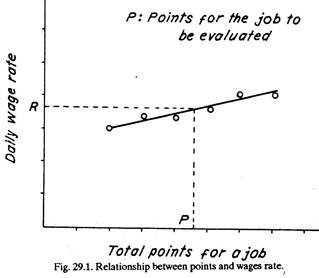 (f) Establish the factors and grades for the job to be evaluated. Add all the grade points (as taken from Table 29.3). Suppose the job gets total grade point ‘P; then as per Fig. 29.1, the daily wage rate for this job is Rs. ‘R’.

(1) Since the method involves points (i.e., numerical figures), it is considered to be more accurate and reliable.

(2) It is more precise than any other method of job evaluations.

(3) Once Grade-Table has been constructed, the chances of subjective discretion decrease.

(4) The method can be understood without much difficulty.

(1) Analysis of factors and grades involves a large amount of work and experience.

(2) Points allocated to each factor base on more or less arbitrary grounds.