An Ideal Wage Structure of an Employee!

Once job evaluation is over, its data can become basis for developing wage structure for the organisation. This means establishing co-relation between ranking, grades, values or points obtained from various job evaluation methods discussed above. Wage structure depends on wage survey and factors influencing organisation to fix wage levels.

Wage or salary surveys are conducted to find out wage/ salary levels prevailing in the region or industry for similar jobs. Other organisation problems such as recruitment policy, fringe benefits, etc. are also considered.

Wage curves can be drawn by obtaining following information:

ii. Wage levels fixed by organisation based on wage curve. 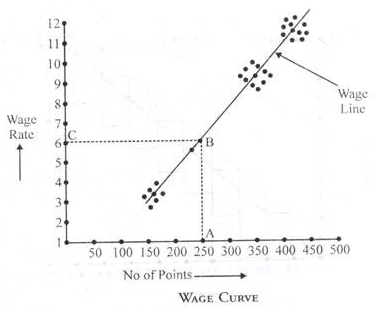 Wage curve is drawn with making the points on X axis as hourly wage rate on Y axis as shown in the diagram. The points/ scores obtained through job evaluation are plotted on the graph for the “Key Jobs”. Joining points indicate relationship between point of established pay grade and base rate of wages.

That is called the ‘trend line’. The scores of the remaining jobs are then plotted. A comparison of points and trend line indicate which are the jobs for which wage rate is high and those for which it is low.

Red circles are made to those for which wage rate is high. This rate may be brought down or frozen. Similar underpaid jobs are marked with “Green circle” showing scope for improving the rate for such jobs.

Wage structure is developed from wage line by grouping jobs which are similar in terms of rank, grade, or points. By this process, we can bring down a large number of jobs in an organisation 10 or 15 groups or grades. 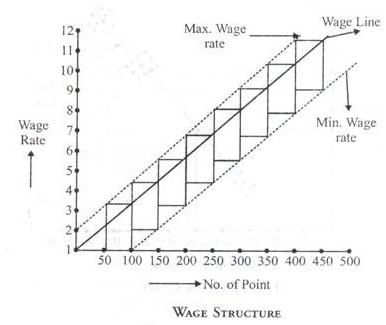 Following aspects may be noted:

1. Each pay grade has a range, minimum rate and maximum rate.

2. Ranges are designed to take care of service and merit.

3. Between grades there is certain overlap.

5. Maximum and minimum rates are designed to be above approximately 15% up and below wage line respectively.