The classical writers have viewed organisation as a machine and persons as different components of that machine. The classical theory has its origin in the writings of Taylor. However the main ideas of this Theory have been developed by Mooney, Brech, Allan and Urwick. As per Classical Theory, where organisation is treated as machine, the efficiency of the organ­isation can be increased by making each individual efficient in it.

For instance, Taylor emphasised on division of labour, fixing every day’s work etc. The emphasis is more on specialisation of performance and coordination of various activities. Classical theory completely ignores the human aspects of organisation and deals exclusively with the formal structure that should be in an organisation.

Key Pillars (or Characteristics) of Theory:

(i) Division of Labour:

It refers to the division of the organisation task into subtask and then allot these subtasks to individuals in such a way that each individual would have the narrowest task so that he can specialise himself in that task with a view to improve the efficiency of the organisation.

Scalar and functional processes deal with the vertical and horizontal growth of the organisation respectively. The scalar process deals with the vertical elaboration of organisation. The scalar process refers to the growth of the chain of command, the delegation of authority and the unity of command from the top (chief executive) to the bottom (first line supervisor); and obligation and reporting from the bottom to the top. Whenever there are two persons in an organisation existing in a superior subordinate relationship, there is a scalar relationship.

Structure is the framework of the formal relationship among various persons (tasks and activities) in the organisation. Proper structure, by introducing logical and consistent relationship among various functions, determines how effectively and efficiently an organisation will perform. The basic structural element in the classical theory is the position. These positions are grouped together in various ways – either horizontally, vertically or both line and staff relationships.

People and departments that are authorized to determine the basic objectives of the organisation and assess the achievements constitute the line function, for example, a production manager. The staff function is that part of the organisation which assists and advises the line function on specialized matters. For example, an Industrial Engineer or a Personnel Manager is a staff function.

(iv) The Span of Control:

(i) Criticisms of Principles:

The classical principles are mainly based on experience and not tested by researches. Lack of universality. The classical theory is based upon the hierarchical structure that establishes the authority (superior-subordinate) relationships between individuals in an organisation.

Today, not this concept, but the technological specialisation with authority is gaining importance. Classical theory suggests unity of command i.e., each person has only one superior. Today, due to introduction of specialized staff functions, work is carried out under multiple commands.

The Classical Theory assumes the organisation – a closed system – a house that, once created will work smoothly. Static view of organisation. That the organisation is not dynamic and it does not adopt any change whatsoever. Unrealistic assumptions about human behaviour. The theory assumes human beings as inert machines. That people at work can be motivated solely through economic rewards.

(iii) Excessive Reliance on the Strength of Key Pillars:

Division of labour causes depersonalization of work at the operative level which results in loss of human relationships. Narrow span of control is not fit for the present environment.

Weber’s ideal bureaucracy, the main constituent of classical theory, suggests the strict adherence to rules and regulations through mindless application of the letters of the rule. In today’s world where problem-solving ability, innovativeness and creativity are required, the bureaucratic approach appears to be inadequate.

(v) Neglect of human factor for focus on Anatomy of Organisations:

The Classical Theory does not envisage the development of informal groups and there is no room for emotions and sentiments of people at work. The Theory recognises tasks and not the people.

The Classical Theory provides little scope for integrating people with the organisation. Goal setting and decision-making is by the top without consulting the subordinates. 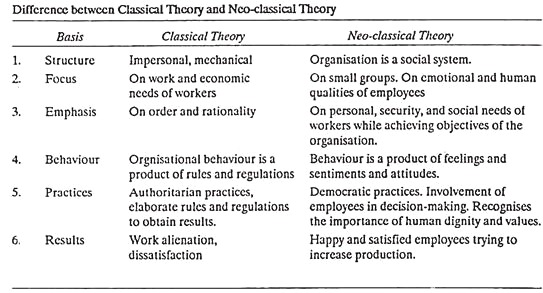 The main propositions of Neo-classical Theory are listed below:

(i) The organisation in general is a social system composed of several interacting parts.

(ii) The social environments on the job affect people and are also affected by them.

(iv) Integration between organisational and individual goals is a must.

(v) People are interdependent and their behaviour can be predicted in terms of social factors.

(vi) Money is only one of the motivators but not the sole. Men are diversely motivated and socio- psychological factors are more important.

(vii) Man’s approach is not always rational. He behaves irrationally as far as rewards from the job are concerned.

(viii) Both way communication is necessary for sound functioning of the organisation.

Though, neo-classical theory is an improvement over the classical theory, it offers a more human­istic view towards people at work, recognises informal group, group norms, informal leader, non- economic ret-wards etc., even then it is subject to certain criticisms as explained below.

(i) Certain assumptions are not true and as a result there are conflicts in the interests of various groups in the organisation.

(ii) The Theory has limited applicability and is not suitable for all organisations.

(iii) It lacks unified approach of the Organisation Theory.

(iv) The Theory lays more emphasis on human aspect and other aspects of the organisation have been ignored or neglected.

The Modern Organisation Theory is of recent origin having developed in sixties and flourished in seventies. The source of inspiration for modern theory is the Systems Analysis. The modern theory has an analytical base, it relies on empirical research and above all has, integrating nature. It is highly constructive. The theory views the organisation as a system and studies it in its totality as a complex system of human interrelationships. The theory gives answers of many complex questions ignored by classical or neo-classical theorists.

The important questions are:

(1) What are strategic parts of the system?

Organisation being a system has the following five parts:-

An organisation is nothing but collection of individuals who have united to achieve its goals. Individuals enter the organisation with varied backgrounds, attitudes, motives and sentiments. They interact and influence each other and the things in the environment and are also influenced by them.

Physical setting implies the physical conditions (say shop floor conditions) under which a person has to do the work. Physical environment or working conditions affect efficiency level.

(2) What is the nature of their interdependency?

The above explained five parts of the system, work unitedly, cooperatively and in collaboration with each other. They interact within and between themselves.

Such interactions are of two types:

(i) Interpret interactions in which each part of the organisation interacts with all other parts. An individual may mould the group according to his point of view and then the group may put their viewpoint before the organisation.

(ii) Intrapart interactions in which an individual performs a minute part of the total job and even for that limited task he is to seek assistance from others, such as a lathe operator needs the services of maintenance-man. The individual’s job may be a part of the series of processes involved.

(3) What are the processes which link various parts of the system and facilitate their adjustment to each other?

No part of the system works in isolation. They are interdependent and interlinked.

The linking is achieved by three linking processes namely:-

Through communication process, various parts are able to get, store, retrieve and feed informa­tion. The communication may be formal-informal, vertical-horizontal and line-staff.

Balance refers to an equilibrating mechanism whereby the various parts of the system are maintained in a harmoniously structured relationship to one another.

(4) What are the goals of the system.

Every system including the organisational system has certain goals. Almost all organizations have at least three major goals namely growth, stability and adaptability. Interaction is essential ingredient so that all the subsystems in combination produce the output.

(A) The validity of the modern theory is appreciated on the following grounds:-

(1) Modern theory considers organizational unit as open system. It essentially consists of five basic elements —input, transformation process, output, feedback and environment. Being open system, it continually interacts with the external environment; the basic purpose of interaction is survival. Unlike closed system, the open system operates even in the event of dynamic and ever changing environment.

(2) Unlike classicists static structure, modern theory is dynamic in interaction with the structure. It is constantly subject to change as environment changes. Organisation adapts itself suitably to the changing environment and it survives.

(3) Modern Theory is both macro and micro in its approach. It is micro when considered with respect to the entire nation or industry. It is macro with respect to internal parts of the organisation. Hence the theory is multi-level and multi-dimensional.

(4) In contrast to classical, modernists view individual as complex being who can be motivated in multitude of ways. Modern Theory is thus multi-motivated.

(5) Modern Theory is multidisciplinary in the sense that it heavily draws its concepts from the various disciplines such as economics, sociology, engineering, psychology, anthropology etc., for prob­lem solving and decision-making.

(6) Modern Theory does not dispute the principles of both the earlier theories but suggests that they are incomplete in the sense that they deal only with structural aspects and overlooked the totally integrative systems approaches to human process in the organisations.

(7) According to system’s approach, the total system should be studied as a whole and not in parts.

Though the Modern Theory has contributed a lot to the organisation, yet it is not free from criticisms:

(i) The Theory has not lived up to the expectations it raised at the beginning. It promised to provide an adequate and comprehensive explanation of organisation, but this promise does not seem to be fulfilled.

(ii) Though critics regard it an important theory of organisation, it has not yet developed sufficiently as a theory of explanation in the relam of human behaviour.