1. Formal or Classical Theory of Authority:

This is known as top-down authority. It supports the principle of scalar chain or organisational hierarchy. In this theory, authority flows from top to bottom through various levels of hierarchy. It flows from the Board of Directors to Managing Director, to General Managers, to middle-level managers, lower-level managers, supervisors and finally to workers. Every subordinate accepts this authority and obeys instructions issued by the superiors.

Disobedience is followed by coercive measures to demand obedience. This authority is derived by virtue of position in the organisation. When that person leaves the organisation, he loses the authority to issue instructions also. The flow of authority is governed by the process of delegation. Each level in the scalar chain can exercise only that much authority that is delegated through superiors.

The authority clearly defines the job of the position, that is, the task the position holder has to achieve through orders to be given to the subordinates. Being related to position in the organisational hierarchy, it is also known as formal or legitimate authority.

The classical view of authority can be shown as follows: 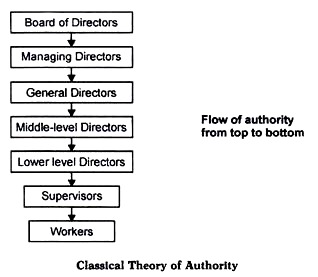 Max Weber is of the same opinion as held in the classical theory of authority. According to him, authority is “the willing and unconditional compliance of people, resting upon their belief that it is legitimate for superior to impose his will on them and illegitimate for them to refuse to obey.”

This theory was formulated by Mary Parker Follett but later popularized by Chester Barnard. It is also known as bottom-up authority. It is based on the premise that authority does not flow from top to bottom but flows from bottom to top. It implies that superiors can exercise authority only if it is accepted by the subordinates.

As against classical authority, Barnard viewed authority as existent when subordinates are willing to accept it. If employees do not accept the authority, manager loses the right to give orders.

This theory recognises informal relationships in the organisation. Managers have authority only to the extent that subordinates are willing to accept. The theory provides logical base to authority because formal authority is meaningless if subordinates do not conform to directions.

Though employees implicitly accept authority of superiors at the time of taking the job in return for monetary rewards, this authority does not cover all the directives issued from the top. They accept directives (authority) within the range of acceptance. Chester Barnard calls it a “zone of indifference”. Herbert A. Simon calls it “area of acceptance”.

It means that authority is accepted if it is in the range of acceptance. It is the area or limits set by individuals within which they accept the authority of superiors over them. Outside this ‘area of acceptance’, superiors have to command acceptance of authority. By accepting authority, subordinates enable the order or directives-issuing managers to possess the requisite authority.

Individuals set limits within which they accept the authority.

(a) Actions which are unacceptable and, therefore, not carried out by them,

(b) Actions that are both acceptable or unacceptable. They are the borderline cases, and

(c) Actions which are acceptable and, therefore, carried out by them. These actions lie in the zone of indifference and, thus, managers can issue orders with respect to these actions.

A person accepts authority if, according to Chester Barnard, four conditions are satisfied.

(a) He fully understands the communication,

(b) At the time of decision, he believes it is consistent with the objectives of the organisation,

(c) At the time of decision, he also believes that it is consistent with his personal objectives, and

The fewer of these 4 conditions that are present, the lower the probability that authority will be accepted and obedience be exacted.

Barnard offers the following guidance on what managers can do so that their commands will be accepted and obeyed.

He maintains that manager’s commands will be accepted over the long term if:

1. The manager uses formal channels of communication and these are familiar to all organisational members.

2. Each organisational member has an assigned formal communication channel through which orders are received.

3. The line of communication between manager and subordinate is as direct as possible.

4. The complete chain of command is used to issue orders.

6. The manager uses formal communication lines only for organisational business.

7. A command is authenticated as coming from a manager.

The acceptance theory of authority can be illustrated as follows:

Every person has a different zone of indifference. Same directives may or may not be acceptable to different subordinates. The size of this zone depends upon how much a person benefits from acceptance of the authority and how much he loses by not accepting the authority.

The classical and acceptance theories of authority, thus, deal with same aspects of management (issuing orders to get the work done) but in different ways.

Following are the basic points of difference between the two:

1. It is normative in nature. It describes the norms that managers follow in issuing directions.

2. It relates to role prescription, that is, formal roles to be performed by managers.

1. It is descriptive in nature. It describes how managers actually exercise authority over subordinates.

2. It relates to role behaviour, that is, actual behaviour of subordinates towards the roles prescribed for managers.

3. Role behaviour may or may not match role prescription depending upon employees’ zone of indifference.

3. Authority Theory of the Situation:

This theory applies to situations of crisis or emergency where immediate action is to be taken. The person present at the emergent situation exercises authority to deal with the situation, though it is not formally delegated through the chain of command.

For example, if there is fire or accident in a factory, workers present at the site can immediately use the alarm bell to sound the organisation of the emergency or call fire/ ambulance services. Thus, without having formal authority to use the alarm bell, the worker uses it as authority of the situation.

This theory is derived by virtue of competence, skill and knowledge of a person and not position. People from all departments at all levels approach the person who has competence authority disregarding the official chain of command. Despite not having formal authority, these persons issue orders or directives by virtue of their skill to do so. The theory accepts informal relations in the organisation.

For example, middle-level manager of production department has knowledge of tax related matters. People with problems on tax from all departments and levels will approach him for advice irrespective of their official positions. Personal qualities, like social or technical competence are the basis of authority.