After reading this article you will learn about the relationship between centralisation and decentralisation.

This question is sought to be resolved through an operational philosophy of management — either to concentrate authority for decision-making in the hands of only one individual or a handful of people or force it down the organisation structure into the hands of quite a large number of people.

Like the concept of delegation the concept of centralisation has to with the degree to which authority is concentrated or dispersed. Just as authority can be delegated from one individual to another, organisations also develop patterns of authority across a wide variety of positions and departments. ‘Delegation’ is a narrow concept.

In general, it refers to the extent to which individuals delegate authority and responsibility to people reporting directly to them. On the other hand, ‘decentralisa­tion’ is a much broader concept. It usually refers to the extent to which top-level management delegates authority downward to divisions, branches, or lower-level organisational units.

In others words, it refers to the extent to which power and authority are systematically delegated throughout the organisation to middle and lower-level managers. General Electric, for example, has historically allowed middle and lower level managers to make decisions regulating the area of responsibility. 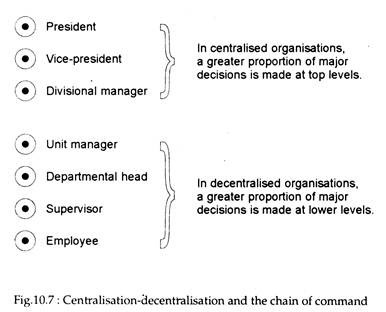 It may be noted in this context that both centralisation and decentralisation are relative concepts, when applied to organisations. For instance, the upper management may decide to centralize all decision making: purchasing, staffing, and operations.

Alternatively it may decide to set monetary limits on what can be purchased at each level, decentralise the hiring decisions to first-level management for clerical workers (retaining authority for managerial decisions); and permit operational (e.g., production) decisions be made where appropriate.

It may be noted that no organisation is ever completely centralised or completely decentralised. Some firms position themselves toward one end of the continuum, while some lean the other way. Empirical study reveals that the extent of either ranges along a continuum from high centralisation to high decentralization.