A ‘Mutual Fund’ is an investment vehicle for investors who pool their savings for investing in diversified portfolio of securities with the aim of attractive yields and appreciation in their value.

As per Mutual Fund Book, published by Investment Company Institute of the U.S., “A Mutual Fund is a financial service organisation that receives money from shareholders, invests it, earns returns on it, attempts to make it grow and agrees to pay the shareholder cash on demand for the current value of his investment”.

The investment managers of the funds manage these savings in such a way that the risk is minimised and steady return is ensured.

Securities and Exchange Board of India (Mutual Funds) Regulations, 1996 define ‘mutual funds’ as “a fund established in the form of a trust to raise monies through the sale of units to the public or a section of the public under one or more schemes for investing in securities, including money market instruments”.

So, a mutual fund is a special type of institution, a trust or an investment company which acts as an investment intermediary and channelises the savings of large number of people to the corporate securities in such a way that investors get steady returns, capital appreciation and a low risk.

The concept of ‘mutual fund’ is a new feather in the cap of Indian capital market but not to international capital markets. The formal origin of mutual funds can be traced to Belgium where Society Generale de Belgique, was established in 1822 as an investment company to finance investments in national industries with high associated risks.

In England, the Foreign and Colonial Government Trust was established in 1868 to spread risks for investors over a large number of securities.

In India, first mutual fund was started in 1964 when Unit Trust of India (UT1) was established in the similar line of operation of the U.K. based Investment Trust Companies.

The terms like Investment Company, Money Funds, Investment Trust and Mutual Fund are used interchangeably and used to describe same thing in American literature. The term ‘mutual fund’ has not been explained in British literature but it is considered as synonym of investment trust of U.S.A.

The performance of mutual funds in 1995-96 and 1996-97 had not been encouraging. Investor confidence in mutual funds, which idealy should be the most preferred investment vehicle for lay investor, had been low. There has been lukewarm response to their schemes during this period.

This could be attributed partly to a lack of confidence and partly to market conditions which have affected the perception of investors. Mutual funds in India mobilised only Rs. 2,167 crores during 1996-97, upto December 1996. However, the position improved during 1997-98. The number of offer documents of mutual funds filed with SEBI increased substantially from 32 in 1996-97 to 60 in 1997-98.

The amount mobilised through various schemes also increased considerably. The gross mobilisation of resources by all mutual fund schemes during the year 1997-98 was around Rs. 13,000 crores which was for the first time higher than the resources mobilised by the primary market.

These improvements were partly in response to the regulatory changes brought by SEBI following the Mutual Fund 2000 Report and the notification of new regulations.

The emphasis of these new regulations is on empowerment of investors, greater compliance of regulations by mutual funds, obligations of trustees as frontline regulators, improved disclosure standards in offer documents, standardisation of valuation norms for investment and computation of net value of assets (NVA).

During April-December, 1999 Mutual Funds raised Rs. 35,915 crore in gross terms as against Rs. 16,288 crore in the corresponding period of 1998. In nt terms, they mobilised Rs. 12,194 crore during the same period as against a net outflow of Rs. 950 crore during the whole of 1998-99. Out of the total mobilisation, the share of Unit Trust of India was about 28 per cent while the share of private sector was 66 per cent.

The balance of 6 per cent was mobilised by banks and financial institution-sponsored funds. Out of the total mobilisation of Rs. 22,088 crore by the private sector mutual funds, foreign funds (nine) raised the maximum amount of Rs. 9,822 crore. The monetary and credit policy for 1999-2000 has permitted money market mutual funds to offer cheque writing facility to unit holders. 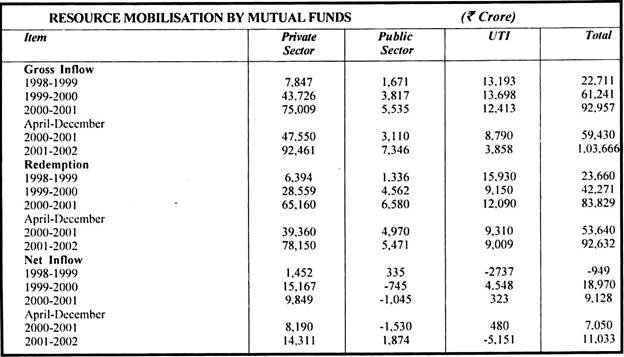 2000-2001. Private sector mutual funds accounted for 89.2 per cent of the total resource mobilisation during April-December 2001, compared to 80 per cent in the previous year.

4. Growth of the Mutual Fund Industry

The following table summarises the growth of the mutual fund Industry. Overal assets under management (AUM) grew from Rs. 102,831 crore to Rs. 143,688 crore in 2004 or 5.1 percent of GDP. A striking feature of this growth was the success of the private sector, which had an increase from 42.9% of assets to 77.6 percent of assets in this period.

Assets under management of mutual funds:

The mutual fund industry has experienced slow growth in recent years, with assets under management nearly stagnant at Rs. 150,537 crore the table mentioned below depicts that the bulk of mutual funder assets continue to be in debt securities.

However, assets in growth funds rose sharply in 2004 to reach Rs. 31,551 crore. The reason can be associated with India becoming a retail market where house holds directly own the bulk of securities.

The big jump in the assets under management in the recent months can be attributed to the increase in number of new diversified equity schemes and marketing efforts put by MFs issuing companies.

5. Problems of Mutual Funds in India

Mutual Funds in India are at the adolescent stage in comparison to the degree of growth and development of mutual funds in the developed economies like U.K., USA, Japan, Australia, etc. The mutual funds in India have not been able to perform upto the desired level and in many cases have expressed their financial inability to repay the invested capital along with promised rate of returns.

The following are some of the main problems that are being faced by Indian Mutual Funds:

Mutual funds in India face liquidity problems. Investors are not able to draw back from some of the schemes; there is no easy exit route. ‘Bad delivery’ has caused a lot of problems and liquidity crisis for the mutual funds.

Mutual funds in India have not been able to provide innovative schemes in terms of risk, liquidity and choice of the investors.

Most of the mutual funds in India are suffering because of inadequate research facilities. Most of the funds depend upon external research and have no facilities for in- house research. They should provide more money on the research and development if they want to be successful in future.

Mutual funds in India have been following conservative pattern of investment. They have not been able to diversify the risk to a large extent, which has caused low returns on investments.

(v) No Provision for Performance Guarantee:

Mutual funds in India have so far failed to provide performance guarantee to the investors. In many cases, there has been erosion of capital.

There have not been adequate and timely disclosures of material information to the investors by the mutual funds in India.

(viii) No Rural Sector Investment Base:

Indian mutual funds, so far, have not been able to create rural sector investment base. Sufficient efforts have not been made to educate the potential investors. Mutual Funds should launch investor’s education prorammes and expand their activities to rural areas.

According to a recent survey conducted by Price Waterhouse Coopers, about 50% of the mutual funds are not managing risk properly and another 50% do not have documented risk procedures or dedicated risk managers. Thus, the mutual funds should have proper risk management.

Calculating the Valuation of a Firm (With Formula)
8 Important SEBI Rules and Regulations, 1993