Introduction and Definition of Decision Making:

A decision is the conclusion of a process by which one chooses between two or more available alternative courses of action for the purpose of attaining a goal(s). The process is called decision making. Managerial decision making is synonymous with the whole process of management.

To illustrate the idea, let us examine the important managerial function of planning. Planning involves a series of decisions such as what should be done? When? How? Where? By Whom? Hence planning implies decision making.

Other functions of management such as organizing and controlling can also be viewed as composed of making decisions. A decision is an act of choice wherein a manager forms a conclusion about what must be done under a given situation. A decision represents a course of behaviour chosen from a number of possible alternatives.

Decision making involves two or more alternatives because if there is only one alternative, there is no decision to be made. A decision is a course of action or inaction selected to meet the requirements of a solution (i.e., problem). Decision may also be conceived as a conclusion that a manager has reached so as to know what he (or others) should do in future (or later on).

The future must be seen at least in generality, if the decision is to be properly oriented in terms of goals. Decision making is an intellectual activity, because it calls for both judgement and imagination to select one from among many alternatives.

Decision with regard to future course of action for the organisation, over-short or long terms, may be directed in every conceivable physical and organizational area, for example, there are:

Throughout the business cycle, it is required to supply, financial, technical or other information as an input to help making decisions at higher management levels, for achieving maximum return on the assets of the business enterprise. Decisions are usually made to attain the objectives of the business. In business, whether the enterprise is big or small, changes in condition occur, shifts in personnel take place, unforeseen contingencies arise.

Moreover, just to get wheels started and to keep them moving, decisions must be made. Every aspect of management functions, such as planning, organizing, and control is determined by decisions, the result of which is the performance in the organization. Decision making is vital to all management activities. It helps set definite objectives, prepare plans of action, determine organizational structure, motivate personnel and introduce innova­tions.

A major premise of management science is decision making, regardless of the situation involved, which can be considered as a general process, consisting of the steps:

(2) Searching for alternative courses of action,

(3) Evaluating the alternatives, and

Much confusion exists between the terms decision making and problem solving. One way to distinguish between the two is to consider the entire process (steps 1-4 above) as problem solving: the specific step of making the choice (step 4 above) is the decision or the solution to the problem.

The major theories of decision-making are:

1. The Intuition Theory or the Traditional Theory:

Decisions are taken by intuition ox hunch without really considering carefully all the alternatives. A person just decides a particular course of action because he feels that, that course is the best one.

This is just opposite to Intuition Theory. Here the decision is made rationally, after a careful probing into all the alternatives. It is essentially a theory of decision making under conditions of certainty which is, of course, a rare phenomenon.

Decisions are made on the basis of a limited, approximate model of the real situation. 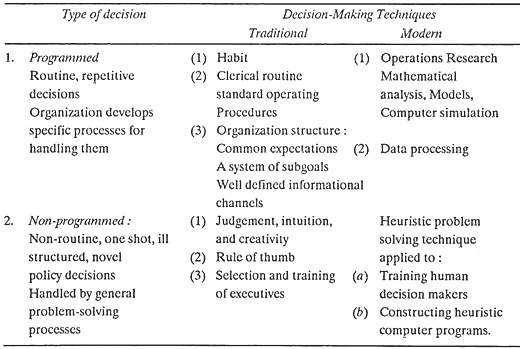 The Scientific Approach to the Decision Making Process:

The scientific approach is a formalized reasoning process.

It consists of the following steps:

The problem for analysis is defined and the conditions for observation are determined.

Observations are made under different conditions to determine the behaviour of the system containing the problem.

Based on the observations, a hypothesis that describes how the factors involved are thought to interact or what is the best solution to the problem, is conceived.

To test the hypothesis, an experiment is designed.

The experiment is executed and measurements are obtained and recorded.

The results of the experiment are analyzed and the hypothesis is either accepted or rejected.

These six steps of the scientific method can be applied to decision making. For example, the evaluation of alternatives is done scientifically through experimentation.

The overall relationship of the scientific approach to the decision making process is shown in Fig. 18.1. 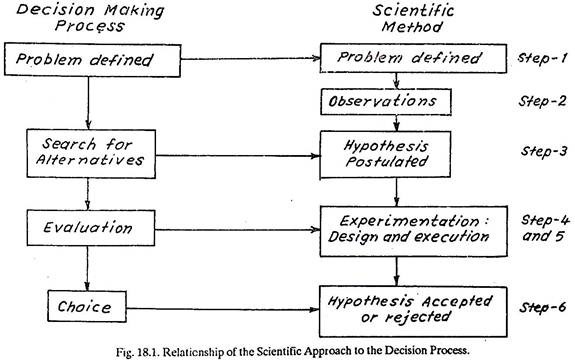 The following guidelines may be followed for effective decision making:

2. Ensure that the decision will contribute to the goal.

5. Ensure successful implementation of the decision.

6. Evaluate the results, and

7. Be flexible and revise the decision which does not yield the desired results.