In this article we will discuss about:- 1. Stages of Decision Making 2. Types of Decisions 3. Process 4. Theories 5. Organisation.

Searching for problems, and identifying and defining problems that demand action. More briefly, what is the problem?

Formulating alternative courses of action, and identifying their likely costs and consequences. More briefly, what are the alternatives?

Selecting a particular course of action from the various alternatives. More briefly, what alternative is best?

Thus, we need to understand the following three points:

(a) The proportion of time devoted to each of these activities will vary from one situation to another, from one level of authority to another, and from one manager to another.

(b) Each stage is in itself a complex decision making process, as each problem generates sub-problems and requires application of all these three criteria.

(c) The identification of stages does not guarantee easy solution of managerial problems but does assist the managers in some way or other.

An outline classification of decision making is given below for comprehension:

The decision making process is very complex. There is no simple analytical model upon which basic strategic choices are made. The above diagram shows that a large number of disciplines influence and interact on strategic decision making in organisations.

The readers must understand that there are no neat formulas to quantify and determine how much of each discipline will apply to a particular problem nor how much weight a decision maker should give to each of the disciplines. 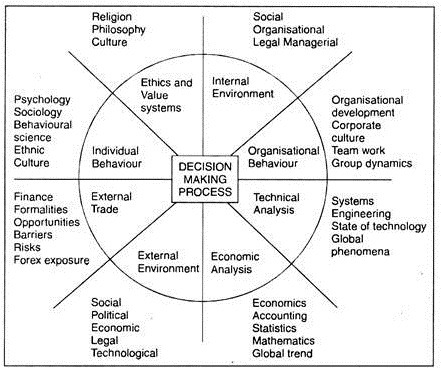 From company to company, and within the same company, the decision process is constantly changing. Furthermore, major strategic decisions tend to be, in most cases, unique to each organisation.

The theories of decision making, in a broad classification, are of two types:

(i) Rational or Normative and

Their characteristics and general theme are presented next. 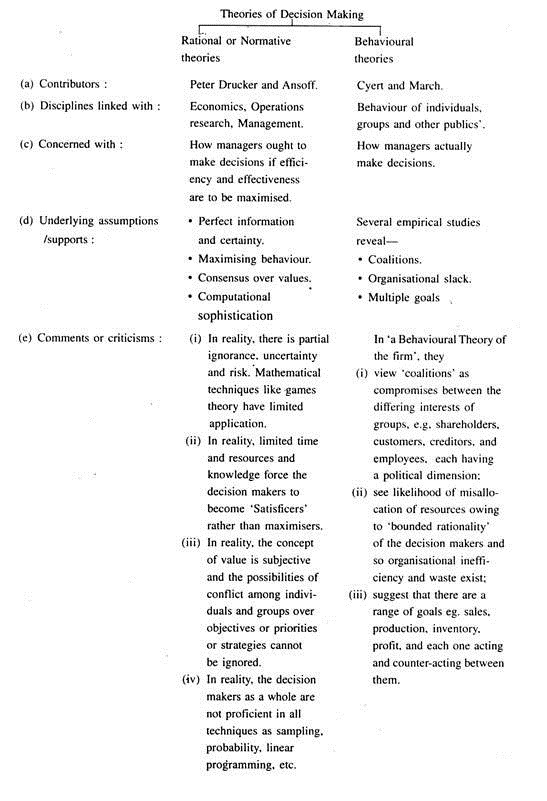 On the rationality approach to decision making, Simon observes: ‘In terms of what objectives, and whose values, shall rationality be judged?

On the basis of this question, he has identified four types of rationality in decision making:

(i) ‘Objectively’ rational, if it maximises given values in a given situation.

(ii) ‘Subjectively’ rational, if it maximises attainment of given values in the context of the ‘bounded’ or limited knowledge of the decision maker (that is, bounded rationality).

(iii) ‘Organisationally’ rational, if it is oriented to the attainment of organisational goals or objectives (for example, Peter Drucker’s seven objectives discussed here­after on ‘Planning’).

(iv) ‘Personally’ rational, if it is oriented to an individual’s goals.

It is interesting to note that Cyert and March also emphasise the on-going political process involved in the reconciliation of such goals. They say, ‘organisations do not have objectives, only people have objectives’. Thus organisational objectives are the end-product of a complex and continuous interaction between individuals and groups within and outside the organisation.

In the organisation of decision making, there are basically two crucial schemes:

There are a range of factors that affect the ‘optimum’ proportion.

Of them, three major factors are:

(b) The degree of diversity in the activities being controlled (it is easier to centralise the control of similar activities than dissimilar ones); and

The history of the enterprise and the philosophy of management are also other criteria.

The positive features of decentralisation are:

(i) It reduces the load on top management,

(ii) It encourages initiative and drive of middle and junior management,

(iii) It enables quick decisions, and

(iv) It assists in the appraisal of managerial performance.

The negative features of decentralisation are:

(i) Closer coordination and control by the top management are rendered difficult,

(ii) Some duplication of effort and activities takes place,

(iii) Uniform application of policies and standards is difficult at times.

This issue should be discussed along with the matrix structure of an organisation. There are many ways in which decision makers can be departmentalised.

But the main approaches could be summarised in a diagram next:

It combines the advantages and disadvantages of both functional and product organisations, and the optimum balance between them would yield results in the strategic choices and applications.

(ii) The relevance of a management dictum that ‘structure follows strategy’.

One important caution to a practising manager is that he should be a conflict-resolver and a joint delegator in his total task and should see to the practical realities of organisational decision making, without having a massive structural upheaval.