This article throws light upon the the three main types of allowances provided to workers. The types are: 1. Process Allowances 2. Personal and Rest Allowances 3. Special Allowances

They are meant to compensate workers for the enforced idleness due to the character or nature of a process or an operation. If the idleness would not have been enforced, the workers would have earned more.

Such idleness is unavoidable when a worker handles a machine which works automatically for a part of the total working time or where a number of workers perform independent operations on the same job and it is not possible to completely balance the production line.

A worker generally feels discouraged if unluckily the idle lime becomes a major portion of the total cycle time because even if he works at a fast pace rate during the non-idle time, he can hardly boost his low earnings.

A worker cannot work continuously like a machine and hence such allowances are provided to him in order to satisfy his personal needs (like visiting toilet, etc.) and to recover from the physiological and psychological effects of energy spent while performing an operation under existing working conditions.

Rest allowance is a relaxation allowance to a worker to overcome fatigue incurred during working. Excessive fatigue affects badly the performance of a worker. Fatigue is the result of unhealthy working conditions, physical exertion, inconvenient postures, concentration, etc. Relaxation allowances may vary from 12% to 20% (or even more) of the normal time from light to heavy works. 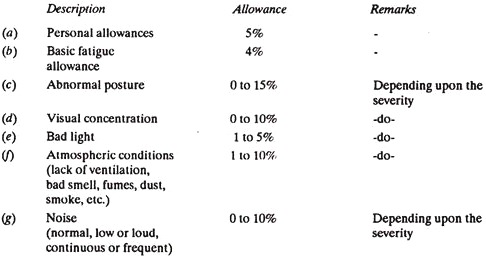 They may be temporary or permanent and are given for activities which are not generally the part of work cycle but are considered essential for performing the work satisfactorily, special allowances can be classified as;

Periodic activity allowance, which is for the activities to be carried out periodically during work cycle, for example, setting up of a planer, regrinding a lathe tool etc.

Machine interference allowances are provided when a worker is looking after two or more machines and one or more of them stop (at random or cyclically) while he is attending to another (machine). The result, of machine stoppages or machine interference, is loss in production or total output. Thus, for no fault of his own, the worker suffers because of low output. Interference allowance compensates these aspects.

If the worker is attending machine B and the automatic cycle time of machine A is over, naturally machine A will stop and the worker is not in a position to attend the same until he makes machine B to start. ‘Random interference allowances’ are given on machines which stop or have to be stopped due to certain causes occurring at random (e.g., when a yarn breaks in winding).