The following article will guide you to learn about how to prepare a pessimistic and optimistic budget of a firm.

In decision-making the first step is usually to make a single ‘best estimate’ for each item.

The worst possible/best possible outcomes can be evaluated from the pessimistic and optimistic attitudes of the decisions made.

In making decision under uncertainty, the decision maker should assess not only the most likely outcome from a decision but also the outcome that will arise if the worst possible happens.

Optimistic, most likely and pessimistic estimates:

Another approach is to make the ‘most likely’ estimate for each item in turn, to see how much difference it makes to the overall result.

Large changes to particular items will often not be important, so we need to identify those critical variables where even a fairly small change can make quite a large difference to the overall result.

This analysis will help in understanding the full range of possible outcomes from a decision and will help the decision maker to take right decision keeping in view the risk involved in the decision.

Natural products Ltd. is a company which makes and sells machine tools.

Its sales for the past few years and its profits have been constant as follows:

In preparing a budget for the next year, there is uncertainty about several key points.

(a) The company has tendered for two contracts, each to supply an overseas customer.

For each of these orders, variable costs (including selling and shipping costs) would be 40% of sales value. Total fixed costs would be unaffected by the order. The company hopes to win both orders, but thinks it more likely that it will win Contract A but not Contract B.

(b) A new product is due to be launched next year. Expected sales are Rs. 30,000 per month, with variable costs of 50% of sales, and fixed costs of Rs. 5,000 per month. The most likely launch date for the new product is in midyear (i.e., six months into the year) but it could be launched as early as the end of month 4 or as late as the end of month 9.

(c) Although it is expected that sales price and costs will not go up, there is a reasonable possibility that variable costs on the current product range will go up by 105.

Prepare a most likely, a pessimistic and an optimistic budget.

You should find this approach to budgeting quite straightforward.

The most likely, optimistic and pessimistic assumptions are shown: 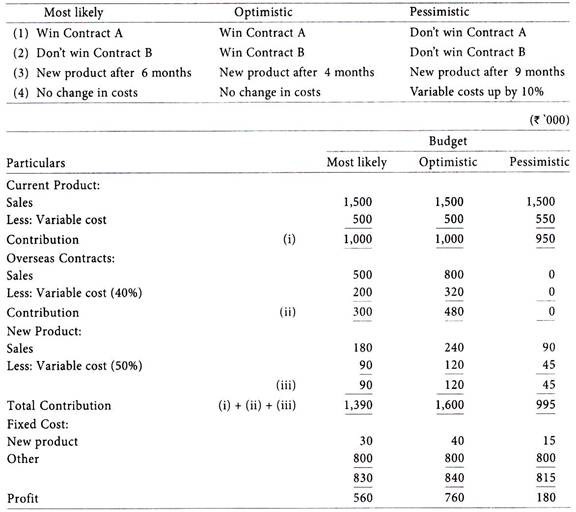 The ‘most likely’ budget will probably be adopted as the master budget, but the management of the company could use the three budgets as follows:

(a) To assess the likely effect of actual outcomes (for example winning Contract A).

(b) To identify by how much each uncertain outcome might affect profits, and do whatever they can to try to avoid the worst outcome if profits would be particularly badly affected.

In this illustration it is fairly clear that winning Contract A is the most important ‘uncertain outcome’ and management might wish to think about ways in which they can improve their chances of winning it. The most likely/worst possible/best possible (or three tier) approach to budgeting is best suited to situations where there are only a few uncertain outcomes.

When there are a large number of outcomes which cannot be predicted with any reasonable confidence, having just three budgets will probably be too simplistic and not really helpful to management.