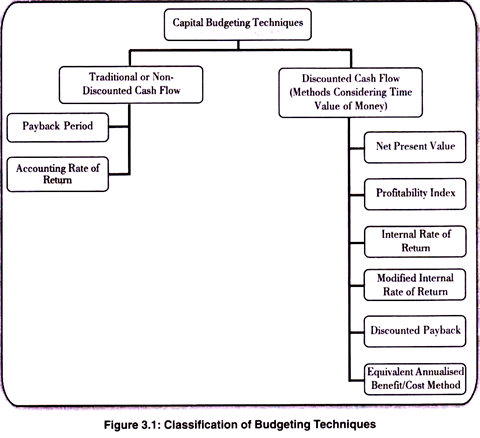 It refers to that period within which the project will generate the necessary cash to recoup the initial investment.

In case of even cash flows, payback period can be calculated as follows:

In case of uneven cash flows, the payback period can be found out by adding up the cash inflows until the total is equal to the initial cash outlay.

(b) In case of selection from a number of projects, the project with the shortest period will be selected.

(a) Very simple method to understand and calculate

(b) It requires less of costs in terms of time and money as compared to other methods that require a lot of analysts’ time and the use of computers.

(c) Its emphasis on early recovery of initial investment retains liquidity in the firm. The funds so released can be put to some other use.

(d) It establishes a Break Even Point, the point at which the costs are fully recovered but profits are yet to commence.

(e) It is suitable in case of projects where risk of obsolescence is very high.

(f) In case of very uncertain circumstances, payback may become important not so much as a means to profitability but as a means to reduce the risk in case of projects bringing cash flows in later years.

(a) It does not consider the cash flows after the payback period. It is not good for comparison of two projects, one involving a long gestation period and the other with a short gestation period.

(b) It emphasizes on capital recovery and not profitability

(c) It ignore the time value of money

(d) A firm may face difficulty in determining a maximum payback period. It is a subjective decision

(e) It fails to consider the magnitude and the timing of cash inflows. It gives equal weights to returns of equal amounts even though they occur in different time periods.

As per this method, the capital investment proposals are judged on the basis of their relative profitability. It is a ratio of the average after tax profit divided by the average investment.

(a) A project with ARR above expected level will be accepted

(b) In case of more than two projects, a project with Highest ARR will be ranked first, and so on.

(a) It considers the cash flows of the entire life of the project, unlike payback method.

(b) It considers net earnings after depreciation and taxes.

(c) It does not involve complicated calculations

(a) It ignores time value of money like payback method

(b) It considers net earnings after depreciation, but analysts feel that only cash flows are relevant in decision making, which is ignored by ARR

(c) ARR has different variants, due to diverse concepts of investment and earnings, leading to different rate of return for one proposal.

It is a Discounted Cash Flow Technique, recognizing the Time Value of money. It states that the cash flows of a project are received in future in different time periods, so they can be compared with the cost today only if the future cash flows are discounted to present values.

(a) Estimate the total cash outflows in different periods

(f) Accept Project if NPV is positive or else reject.

(b) In case of multiple projects, select the project with the highest NPV.

(a) All cash flows are considered, unlike Payback period.

(b) It considers time value of money

(c) Risk is incorporated in Capital Budgeting Decision by adjusting the discount rate.

(d) NPV of two or more projects can be added.

(e) Different projects can be compared on NPV basis, because all cash flows are converted into present value.

(a) The accuracy of NPV depends on accurate estimation of the future cash flows and application of discount rate. This is quite difficult in practice.

(b) NPV and ranking of projects may differ at different discount rates, causing inconsistency in decision making.

(d) It ignores the size of projects, the quantum of initial cash flows and the difference in lives of two projects.

(e) NPV may not be that useful if life terms of two projects are different, since smaller fife project when repeated may give more NPV if repeated as compared to a project with longer life and higher NPV.

(b) In case of many projects, accept the project with highest PI.

(a) It considers the time value of money

(b) It is a relative measure of a project’s profitability

(c) All cash flows are considered

(e) It is more useful in case of investment in divisible projects, when funds are not fully available.

(a) It is not useful in case of investment in indivisible projects.

(b) PI of two or more projects cannot be added.

This method is a combination of NPV and Pay Back Period. It calculates the payback period after discounting the cash flows.

(a) Estimate the total cash outflows in different periods

(b) In case of selection from a number of projects, the project with the shortest period will be selected.

(b) Risk is incorporated in Capital Budgeting Decision by adjusting the discount rate.

(c) It considers liquidity as well as profitability

(d) Simple to understand and calculate

(e) Different projects can be compared, because all cash flows are converted into present value

(a) All cash flows are not considered.

(b) The accuracy of this method depends on accurate estimation of the future cash flows and application of discount rate. This is quite difficult in practice.

(c) It ignores the size of projects, the quantum of cash flows after the payback period.

This IRR is then compared with the rate of return that the management wishes to generate from the project. Decision is taken after comparing the IRR with this rate of return.

Co = PV of Cash out flow

(d) If the value of the right hand side is lower than the value on left hand side, then substitute a lower value for r.

(f) Put these two values of r in the following formula of interpolation and get the value of IRR:

(a) Accept Project if IRR > Cut off rate

(b) Reject Project if IRR < Cut off rate

(a) It considers time value of money

(c) It serves the basic objective of maximization of shareholder’s wealth, when the project’s IRR is greater than the opportunity cost of capital

(a) It can give misleading and inconsistent results under certain circumstances, generally in case of projects with multiple cash outflows.

(b) It conflicts with NPV in case of inflow/outflow patterns are different in alternative proposals.

(c) It does not have the property of additively i.e. IRR of two or more projects cannot be added.

(d) It assumes reinvestment of cash inflows at the IRR, which is practically invalid

(e) It is a tedious and time consuming work to calculate IRR because of use of trial and error method.

(f) It may sometimes give multiple rates due to the mathematics of IRR computation, leading to confusion.

Due to the limitations attached with IRR, MIRR is used. It overcomes some of the deficiencies of IRR like it eliminates multiple IRR, it doesn’t assume reinvestment of the cash inflows as assumed in IRR, and it produces result which are consistent with NPV.

(a) Under this method, all cash flows apart from the initial investment are brought to the terminal value using an appropriate rate of return (cost of capital).

(b) This results in a single stream of cash inflow in the terminal year.

(c) This single terminal value in the last year is then discounted to PV (in year 0) using an appropriate discounting factor.

EAC is often used as a decision making tool in capital budgeting when comparing investment projects of unequal lifespan. It is the cost per year of owning and operating an asset over its entire lifespan. For example if project A has an expected lifetime of 7 years, and project B has an expected lifetime of 11 years it would be improper to simply compare the net present values (NPV) of the two projects, unless neither project could be repeated. EAC method implies that the project will be replaced by an identical project at the end of its life. The projects are compared after their life spans are brought to equal

EAC is calculated by dividing the NPV of a project by the present value of an annuity factor.

Alternatively, the NPV of the project may be multiplied by the loan repayment factor.

(a) Project with lower EAC will be selected over project with higher EAC (in case of costs).

(b) Project with higher EAB will be selected over project with lower EAB (in case of benefits).

(a) It considers time value of money.

(b) It overcomes the drawbacks of NPV method as it give equalized annualized costs of projects with unequal life spans.

(c) It can also be used to calculate benefits from different projects.

(a) It cannot be used if the projects cannot be repeated after their life.

(b) The rate of inflation and other economic factors are considered constant during the repetition of the projects, which is not realistic.