There are two main sources which contribute to farm income, viz., crops and livestock, in addition to these fisheries and forestry also contributes to income.

Crop as a main source of income contributes through:

Livestock as the main source of income:

i. Number of poultry—broiler or layer.

v. Number of productive animal units—a production animal is one directly producing an income, e.g., milch cattle or buffalo. Or small animals, a herd of goats for milk or meat. There may be many kinds of productive animals, for instance, cross breed cows, milch cow like Sahiwal, Murrah buffalo and Bhadwari one.

These four assigned ratios according to their milk output are as follows:

Then we multiply each ratio with their numbers.

(i) Total gross farm output or total farm income. It is affected by output and prices.

(iii) Man-equivalent i.e., the number of workers on the farm. Total farm workers viz. men, women and children are converted into man by 2 children = 1.25 women = 1 man. Here we add all man equivalent days and divide the sum by 365 days which is man equivalent for the year. M.E. is a measure of farm size based on labour input.

The calculation of total production man-work unit on a farm by adding together the products of the average productive man-work unit in the area (crops) is multiplied by the number of hectares on the farm under that particular crop.

Similarly, it is calculated for the livestock.

This calculation is done for the labour intensive farms and the degree of mechanization.

Refers to the productive efficiency and hence refers to the yields per hectare or yield of milk per milch cattle or eggs per bird in poultry farming or in broiler kilograms of live weight per bird.

(a) Farms on which crop production is mainly adopted:

(i) Yield per hectare—quintals of grain and by product.

(ii) Crop yield index—The yield index represents the yield of all crops on farm compared with the average crop yields of the region.

Farm X is better in performance as compared to the region which is taken as 100.

(b) Farms on which livestock is the main enterprise:

(i) On poultry farm (layers)—Eggs laid per hen.

(ii) Litres of milk or kilogram of butter produced per cow or buffalo.

(iii) Number of kids produced by per goat.

(iv) Livestock production index—Similar to crop yield index but only man work unit is used as weight because animals are not given weightage in hectare.

(c) Farms on which crop and livestock both are raised:

1. What does each enterprise which is productive and adds to income in terms of value of output (including home consumption).

2. Multiplying the value of output by the number of units of that enterprise.

4. Dividing the value of 3 of a particular farm by the sum of the products of the standard value of output per unit and units of enterprises on farm as calculated in (3).

Factor # 3. Choice and Combination of Enterprises:

The central problem of combining enterprises is the allocation of resources to each enterprise in a way to maximise net returns for the farm as a whole. The most naturally befitting resources are used for the enterprise in question this called as the commercialisation in production.

The analysis is done as follows:

(i) Percentage of crop area devoted to important crops.

(iii) Percentage value of output (or income) of important crops and livestock. 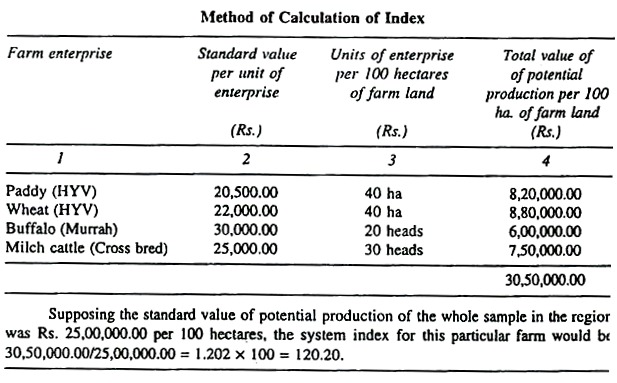 Column (2) gives the standard output per unit of land area on the farm in question which is multiplied with the average (ha) of land under the crop or livestock enterprise to get the value as in column (4) which are added and the addition is divided by the output value of the same enterprises in the region having 100 ha. This will give the system index.

The amount of labour and capital applied on one unit of farm land gives the intensity of cultivation.

Such intensity comes by adopting a double or multiple cropping:

(i) Total number of labour days. On the basis of per hectare of farm area or, if pure crop production, per hectare of crop area. A double or triple cropping is reflected through this measure.

(ii) Total working capital per unit of farm area. It is a measure where livestock is important or where mechanisation is prevalent.

(iii) Total farm expenses. The cash input or machinery use or labour and other input supplies are taken into consideration.

(iv) Intensity index—Calculation is on the basis of total farm expenses per unit of farm area on the particular farm and its comparison with the farm in the region using similar inputs i.e., the former is divided by the later and multiplied by 100.

Labour is the largest percentage of the total cost of production of a particular enterprise. The labour efficiency cannot getting as much production out of a given amount of labour as is economically possible.

Labour Efficiency is measured as:

(i) Crop average per man-equivalent or per work animal unit.

(iii) Productive animal units per man-equivalent for farms having variety of animals.

(v) Net farm output per man-equivalent. It is a good measure for all types of farms measuring the labour efficiency as well as yields prices.

This is either in monetary or physical terms. This relationship tells very clearly what is the total impact of total inputs used on the farm. This points to the efficiency in the use of inputs in a collective manner. If the ratio is greater than one then it is worthwhile to continue with the present combination of inputs or continuing with the enterprise.

The following measures are adopted:

(i) Quantity or value of crop production per quantitative unit (say one kilogram) of the value of fertilizer or feed consumed (as in the case of livestock) used. As such we can measure the efficiency of each input used.

(ii) Livestock efficiency index. This is a measure used where different kinds of livestock are kept on the farm. The basis is per hundred monetary units of the cost of feed for each kind of productive animal. 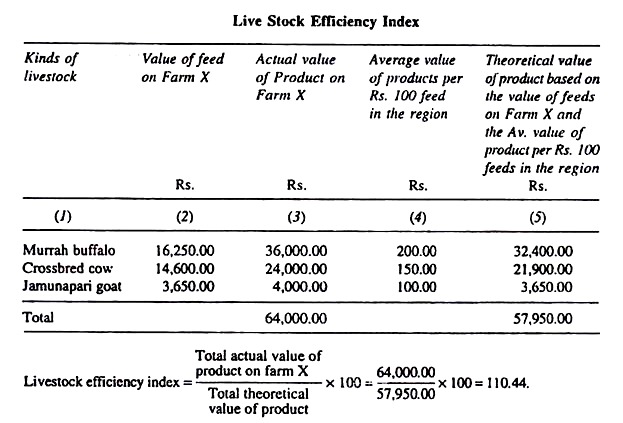 The farm which have investment in capital need to be examined for the return from such an investment.

The capital efficiency could be judged as follows:

(i) Crop Average per Tractor:

This is known as duty of tractor. The purchase of a tractor depends on the size of the holding and the intensity of cropping. Another factor is the custom hiring that is, if the utilisation of tractor is less on the owner’s farm the services of tractor is given on neighbor’s farm or elsewhere but on payment.