After reading this article you will learn about:- 1. Meaning of Delegation 2. Elements of Delegation 3. Principles 4. Process 5. Advantages 6. Disadvantages 7. Barriers 8. Overcoming Obstruction.

The process of delegation starts from the chief executive of an organisation who has the total responsibility for the achievement of goals. In order to share the responsibility of accomplishing goals, he further delegates the work to his subordinates.

These subordinates, finding the work assigned to them by their superior exceeds their “Span of Control” assign a portion of their works to their own subordinates. This process continues till all the tasks and activities are assigned to those who have the appropriate physical, psychological and professional abilities to do it.

Delegation is the downward transfer of formal authority from one person to another. Superiors delegate authority to subordinates to facilitate the accomplishment of the assigned work.

According to Koontz and O’Donnell, “The entire process of delegation involves the determination of results expected, the assignment of tasks, the delegation of authority for accomplishment of these tasks, and the exaction of responsibility for their accomplishment.”

The following three elements are in the scheme of delegation:

1. Assignment of duties or tasks.

3. Accountability for performance of duties and exercise of authority.

1. Assignment of Duties or Tasks:

A manager has to assign a part of his duties to others under him or her because he cannot himself perform all the work. So, when assigning duties he should ensure that the subordinates, to whom work is assigned, perform their tasks sincerely and competently. Even after that a manager assigns duties and tasks to his subordinates; he continues to be ultimately responsible for the proper performance of these duties and tasks.

3. Accountability for Performance of Duties and Exercise of Authority:

The following principles that serve as guidelines for effective delegation of authority are given below:

The functions to be performed, the methods of operations and the results expected must be clearly defined. The authority delegated must be adequate to ensure that these functions are well performed.

In other words, a subordinate should be responsible to only one superior who is delegating the authority to the subordinate.

A misunderstood responsibility can be very dangerous. A general authority can be easily misused. Accordingly, both the responsibility and authority must be clearly specified, openly communication must be continuously kept open for issuing directions as well as for receiving feedback.

6. Limits to Authority to be Well Defined:

A manager cannot properly delegate authority unless he fully knows what his own authority is. To avoid confusion in this respect, there should be written manuals and orders to indicate the limits of authority and area of operations of each manager.

7. Principle of Management by Exception:

Management should delegate the authority and responsibility for routing operations and decision making to subordinates, but must retain such tasks for themselves for which they alone are uniquely qualified. On the other hand, the subordinates must make decisions and take actions wherever they can and should only refer matters of such nature to their superiors, which are unique, and outside their domain of authority.

This practice saves valuable time of top management, which can be utilised, for more important policy matters. Also by trying to solve most of the problems by themselves, the subordinates prepare themselves for higher challenges and responsibilities. 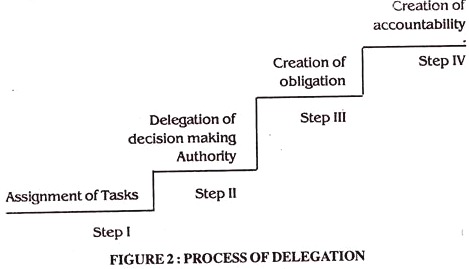 The total task can divided into identifiable parts so that the manager can handle some parts himself and other parts can be given to skilled subordinates. This way the coordination and supervision would become easier.

The second step is to give authority to subordinates to make and implement decisions regarding procurement of resources and supervision of activities that are relevant to the duties assigned to them. This authority must be clearly stated, and if possible in writing, so that there is no ambiguity regarding making necessary decisions.

The authority should also be related to tasks so that if the tasks change, so would the authority. Any matters or decisions that do not fall within the domain of delegated authority must be referred to the superiors.

The third step is the creation of obligation on the part of the subordinates to perform their duties satisfactorily. The person assigned the task is morally responsible to do his best since he has willingly accepted these tasks.

Obligation is a personal concern for the task. Even if the subordinate gets part of the task done through other people, he must accept responsibility for timely completion of the task as well as the quality of the output.

Being answerable to someone for your actions create accountability, an obligation to accept the consequences, good or bad. According to Newman, Summer and Warren, “by accepting an assignment, a subordinate in effect gives his superiors a promise to do his best in carrying out his duties. Having takes a job, he is morally bound to complete it. He can be held accountable for results.

The following are the advantages of delegation:

1. It Helps for Effective Functioning:

Delegation helps the executive to apportion that part of his work to his subordinates. So that he can devote his time to more important areas of his duties like leadership, organisation planning and coordination.

2. It Results in Quick Decisions:

The process of delegation makes it possible to push decision. Making to the lowest level where information, competence and willingness to make decisions are available. Decisions can be made right away at or near the centre of operations as soon as a deviation occurs or the situation demands.

Delegation relieves the manager of the need to attend to minor or routine types of duties. Thus, he is enabled to devote greater attention and effort towards broader and more important responsibilities.

4. It leads for Specialised Service:

Since the work is assigned to the persons who have specialised knowledge and expertise, it helps for specialised services. For example, sales may be delegated to the sales manager, marketing-to-marketing manager, finance-to-finance manager.

5. Delegation is a Motivational Factors:

Delegation may also be used as a device to motivate the subordinate. Subordinates usually respond to delegated authority with favourable attitude. They become more responsible and more dedicated to their work and they feel proud of being given such authority and responsibility, this in turn boosts their morale.

Delegation ensures the employees in the organisation to develop their capabilities to undertake new and more challenging jobs and also it promotes job satisfaction.

7. It can be a Training Ground for Executive Ability:

Subordinates, when given control over the problems they face are able to analyse the situation and make decisions accordingly. This continuous involvement prepares them for problem solving process when they reach a higher executive level. This process will also screen out those from the executive level who have proved to be less successful in handling problems at the lower level.

2. The second problem may lie in the area of coordination. If coordination among these many subordinates is not adequate, then confusion may result and it may become difficult to exercise control over procedures and policies.

3. It may be difficult to perfectly match the task with the capability of the subordinate.

1. Reluctance of Managers or Executives:

The following reasons for managers are not willing to delegate authority are given below:

i. A manager may believe that he can do his work better than his subordinates.

ii. Sometimes, managers might believe that his subordinates are not capable enough.

iii. Delegation may require a lot of time in explaining the task and responsibility to the subordinates. Here, manager may not have the patience to explain, supervise and correct any mistakes.

v. Some managers lack the ability to direct their subordinates.

vi. Some managers feel very insecure in delegating authority especially when the subordinate is capable of doing the job better. The manager, in such a situation, may fear his loss of power and competition from the subordinate.

vii. An executive may be reluctant to delegate if he believes that the control system is not adequate in providing early warning of problems and difficulties that may arise in the delegated duties, thus delaying the corrective decisions and actions.

Subordinates may reluctant to accept delegation of authority for the following reasons:

1. Subordinates may lack confidence in their ability to accept additional responsibility.

2. Subordinates may reluctant to accept authority and make decisions for fear that they would be criticised or dismissed for making wrong decisions.

3. Subordinates may not be motivated to accept additional responsibility and authority willingly in the absence of suitable incentives.

4. In case of adequate information and resources may not be available to the subordinates to carry out their decisions, they may hesitate to accept the delegation of authority.

5. They find it easier to ask their superiors than to try to solve the problem themselves.

The following aspects will help to overcome the obstacles of delegation:

1. Delegation to be Complete and Clearly Understood:

The subordinate must know precisely what he has to know and do. It should be preferably in writing with specific instructions so that the subordinate does not repeatedly refer problems to the manager for his opinion or decisions.

Adequate incentive in the form of promotion, status, better working conditions or additional bonuses must be provided for additional responsibilities will performed.

Shortcoming can be removed by establishing adequate controls. In this regard, adequate checkpoints and controls may be built in the system. For example, weekly reports.