Read this article to learn about the role of computers in business world!

It is impossible to think of modern society without computer and computerization. The basic reason of attaining computers such commanding height in modern business is its wider utility. In older times most business activities were carried through small shops. The classical small shop owners do the activities of production, purchase, sale and accounting alone.

They use to be known of all the business events and do not require any outsider and computerized information help. Modern businesses are vast and employ many people. So businesses are governed by professional managers. Managers are involved in incessant search for effective methods of utilizing the scares resources in best way. For this purpose computer can provide vast infor­mation support in decision areas.

In developed countries application of computers in every phase of business activity has already become a must. The memory of manager is limited so modern managers have crying need of Management Information System (MIS). Substantial refinements have brought about in managerial styles but computer can be regarded most crucial information tool for efficient business management.

Perhaps in the beginning of 21st Century we may have a paperless office room i.e., all the records will be kept in computer and there will be no file or paper except computer print outs. It can be said that computer revolution is a second industrial revolution for the practical purposes.

There are two decision making methods: intuition and rational. Intuition is just a guess and voice of heart but rational decision making is application of mind for best choice making between different alternatives. For a successful manager rational method is more reliable and accurate. But for this purpose information is the basic need.

Computer can work as a information box. Manager working with the help of computer can best utilize the men, machine, money and material. Computer experts working within the MIS can develop various mathematical models for future guidance. Operation Research (OR) can be a very specialized and challenging area for computer techno­crats.

PERT and CPM (programme evaluation and review technique and critical path method) are the two popular techni­ques of OR which can be properly utilized by computers. Data Base Management Systems (DBMS) it a set of software for controlling the managerial activity and minimizing duplication.

The introduction of digital Computer is one of the most profound technological changes that have ever confronted the business managers. Since the end of IInd World War, radical advances in the behavioural and quantitative sciences have forced the managers to adopt the computer technology.

Computerization is playing a vital role in the evolution of systems approach to management. The computer has also had a profound influence upon manager’s thought processes for establishing cause and effect relationship. Managers must be cognisant of their responsibilities regarding the organization’s information system and take an interest in it.

Computers and their attendant technology have supported the MIS with large speed and capacity, which is not feasible in manual or business machine method. So functional managers and staff working in the area of accounting, finance, marketing, personal and production should know the use of computer based information systems.

The earliest counting device developed by Chinese and Greeks was Abacus between 1000 and 3C0 B.C. Charles Babbage, Lucasian Professor is regarded as the father of large digital computers. Babbage spent much of his life and funds working to build a analytical engine and ultimately in 1822 he invented a computer with capacity of calculating to 20 decimal places.

In 19th and 20th Century gradual develop­ment occurred in the sphere of electronic data processing. The following events were historical in the process of computer origin.

1. The first large scale electro mechanical computer was built in 1944.

2. The foremost electronic computer ENJAC was com­pleted in 1946.

3. The maiden commercial available computer, UNIVAC was installed in 1951.

4. The super computer, ILLIAC-IV with numerous busi­ness applications was built in 1960.

5. The most suitable Common Business Oriented language (COBOL) was developed in 1965.

Input Unit, Central Processing Unit and Output Unit. The input unit reads and makes memory of instructions. The keyboards, optical readers etc. of input units acts as ‘eyes and ears’ of computer. The central processing unit consists three sub-units. The memory or storage unit is equivalent to our memory controlled by the brain.

The control unit controls and directs the various unit to carry out the correct job. The arithmetic and logic unit calculates and takes logical decisions. Finally, computer has an output unit, which writes out the results. It is like our mouth with which we speak and write accordingly. The computer outputs the results using a printer and television screen.

Computers are not used in one field but it is used in every field when there is need of transfer of data from one destination to another destination, then networking to required. Networking means connection of minimum two computers with each other or maximum depends upon the need of user. Computers can be connected with each other by: 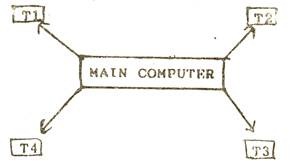 Generally it is used in store market or in financial matters. In the hierarchical connection, sub-systems are connected with the main computer system. Intelligent or non-intelligent minals are followed by sub-computer system with the help of MODEMIS.

The range of 2 KM can be expanded in LAN MODERN means modulation. It means data can be received and data can be transmitted with amplification. Amplification means increases of lower to higher signals. In the case of a wide area networking the Satellite Communication, Radio Communication or wireless communication are used.

The computer resources are of two major classes-hardware and software. In hardware three units are present i.e., input, processing and output. In order to put computer hardware to use, software or programmes are needed. It acts as an interface between the user and computer.

Software development is very expensive. United States Air Force (USAF) is spending approximately three fourth of its computer budget on software and one fourth on hardware. Now a days, there has been a tremendous improvement in the design and efficiency of computers over the years, a very significant recent innovation has been the development of the micro processor.

It is single electronic chip with tremendous capabilities. Today we have computers which can be placed on a desk top which cost just around Rs. 10000 only. There are large computers also costing a few lakhs of rupees.

Hw and sw in Indian context:

Indian computer industry is the fastest growing sunrise industry. In the case of hardware (HW) segment the west nations and Japan has their dominance. But in the case of software (SW) segment Indian industries have attained a certain maturity and international acceptance. The SW exports reached to Rs. 1,040 crore in 1993-94 and there is hope of becoming a major foreign exchange (FOREX) earner.

According to World Bank study India may export of Rs. 3,000 crore in 1996-97. Bangalore is emerging as a SW centre in international market. The computer industry specially SW segment is optimistic about the future, because computerization in more and more Indian industries is being adopted. But there is need that Indian SW makers should consolidate their gains by quality improve­ment to stand in the international market.

The Indian firms are facing competition from various multinationals as IBM, Oracle, Microsoft, Borland, Autocad or Lotus. Despite lack of skilled computer manpower the Indian computer industry has doubled the total revenue to Rs. 4,125 crore in the year 1993-94, over Rs. 2,075 crore in 1990-91. The rise in 1994 to the previous year was 28.5 per cent.

On the hardware side, the Indian computer manufactures are little more than assembly. India lacks technological competence and largely depends on foreign technology. Low technology components such as floppy drives, monitors, key­boards, outer cabinet are being produced by Indian firms. The personal computer (PC) market is the fastest growing seg­ment of Indian HW market.

But high technology compo­nents like the memory chip, processors, hard disk drives are imported from foreign. The HW industry has hard times ahead. The industry circles feels that Indian computer industry should concentrate on the SW segment. In fact, technical progress is the sine qua non for the growth of computer industry, so more and more emphasis on technical advancement should be given then only boom for this sector can be possible.

In the early year of 1940 applications of computers were mainly in the areas of government research. They were mainly applied to the solution of scientific problems relating to science and engineering. Due to advancement of computers and reduced costs computers were later applied to the solutions of business problems also. Now a days, computers have affected lives of every one of us. We get weather forecasts, railways and airways reservation, crime detection, examination results and even horoscopes made through computers.

Fifteen years ago, a great era surrounded the business managers started to talk about the computers, they bought it for the office and any brilliant man was hired to run them. All that has gone now. People have computers at home. Children play games on computers. People who programme them are not mathematicians. Secretaries are throwing away their creaky old typewriters and are switching over to computers. You don’t need to know the detailed working of a computer to use one just like you don’t have to be an electric engineer to use a T.V.

Computers happen to be day to day term in our usual talk. We often have the reference of computers on the radio, TV, newspapers, magazines etc. And now the government has also given enough emphasis on computerization and informatics.

It is the versatility of human ability to reduce complex problems to a simple and logical and then apply computer to solve them. Primarily computers were applied for calculations which were beyond contemplation because of time span and monotony involved in carrying them out.

A computer does what it is instructed to do it cannot do anything which a human being cannot do. Several large business houses have developed computerized system for establishing cause and effect relationship of different variables. The development of statistical and mathematical models based on computers and econometrics have emerged as a new dimension to solve media selection, to evaluate new product acceptance and to weight sales and pricing alternatives. With the help of Computer various tools as dispersion, moments, kurtosis, skewness can be applied in comfortable way. The advantages of computer’s application in business are:

Computer can store much more information than was feasible previously. A peak of 10 [disks can store over 100 million characters or bytes. They can analyze and interpret statistical information about all aspects of business.

(b) Relief from monotonous work:

Computer can relieve clerical staff of routine and monotonous work. But it should not be forgotten that preparation of data for feeding into the computer can be equally monotonous.

As the computers have the capacity to store and analyze data for the entire business very quickly then it becomes easy for the managers to know what is happening in each depart­ment or branch, this facilitates centralized management control. For example, with the help of computers stock positions of all the branches can be quickly known which ensures better control on inventory.

Computer can handle different program­mes for different business operations and it is easy to make frequent changes in the data fed into the computer and instructions given to it. This leads to more flexibility in operation. A computer is more flexible than accounting machine.

Use of computers leads to saving in staff and labour costs. Anyhow, this is a debatable point. It has been observed that installation of computer system, in fact, leads to recruit­ment of more specialized staff.

On the whole the influence of computer on business and management is so important, in fact that the subject of computer is being added to the curriculum as a mandatory course of study for students of various professional courses. But, at present, in India, there is strong need of ‘managing the computer and computerising the management.’