In this article we will discuss about the three-stage model of business corporate life cycle.

One widely utilised view of the developmental sequence represents company evolu­tion as progressing from small to integrated to diversified; there is no implication that com­panies in the second stage need be any smaller than those in the third. The three stages as described by Tuason is tabulated below.

The basic theory is that, as companies grow, many tend eventually to resort to a diversified product mix as a protection against the vulnerability inherent in operating within a single industry.

The development of the multi-product strategy foreshadows the move to a diversified, decentralised structure based on product divisions. However, some firms con­tinue to grow while remaining almost entirely within a single industry. 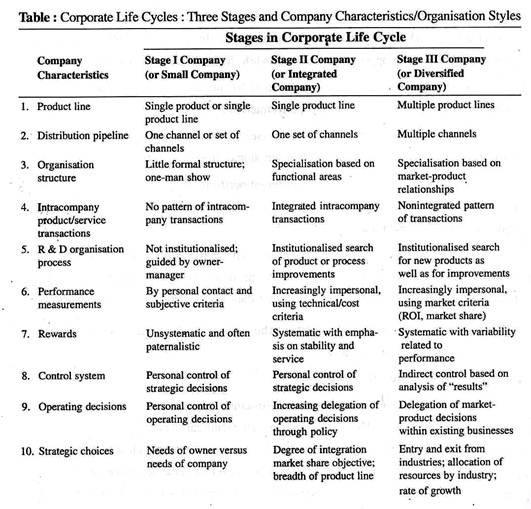 A number of authors suggested stages supplementary to those of the 3-stage model. They are:

1. They advocated for stage iv which may be a coalescing of major companies with the government to formulate and implement national economic policy.

2. Leontiades extended the 3-stage model to include unrelated business conglomerate forms of diversification as a separate stage.

3. Gailbraith and Nathanson have advocated that ‘expansion into multinational markets’ is a distinct stage beyond 3-stage model.

(i) Emergence (similar to stage I),

(iv) Regeneration (It attempts to reverse the ‘decline’ stage, through divestment, assets sell-off, rigid cost cutting, closing some of production lines, etc. This may be internal or external. External regeneration may involve sacrificing the controlling interest, acquisition, merger, or government assistance. Cases of Bengal Potteries, Britania Engineering are examples found in Indian context), and

5. In relation to the topic, A.D. Little’s ‘Life Cycle Portfolio Matrix’ is of great significance.

His matrix is useful in establishing the appropriateness of a specific strategy from the consideration of two dimensions:

(a) Stage of life cycle a business is in and

(b) Competitive situation with respect to eight external factors as under:

The corporate life cycle is determined by assigning each factor a weight depending on its perceived importance and position. 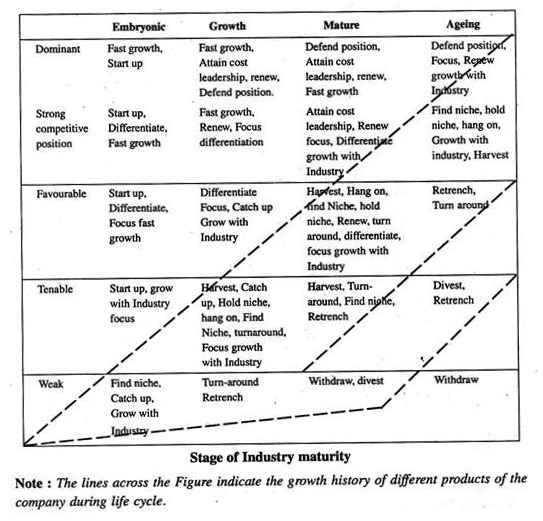