It is the price paid when amount is invested in a scheme. It is also called ‘offer-price’; it may include a sales load.

It is the price at which a close ended scheme repurchases its units and it may include a back- end load. This is also called ‘bid price’.

For example, if the market value of securities of a mutual fund scheme is Rs.200 lakhs and the mutual fund has issued 10 lakhs units of Rs.10 each to the investors, then the NAV per unit of the fund is Rs.20. NAV is required to be disclosed by the mutual funds on a regular basis – daily or weekly – depending on the type of scheme. NAV is the rupee value of one unit of a scheme of the fund.

NAV is calculated as follows: 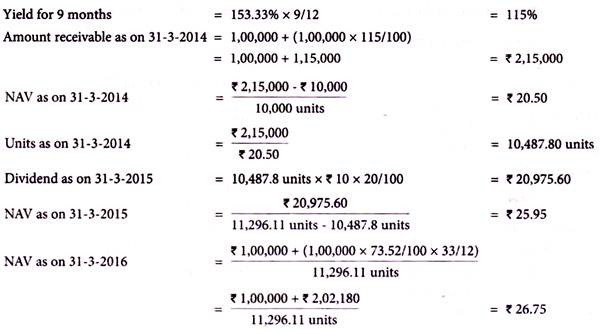 If the number of outstanding units is 155 crore and sales charge is 2.20% on the NAV, what would be the public offering price?