Printers may be classified as:

Daisywheel printer is so called because it uses a daisy-shaped disk made of metal or plastic. The print mechanism of the daisywheel printer consists of a flat disk with petal like projections. At the end of each projection/arm is an embossed character which on impact with the paper will transfer the image of the character. The hub of the wheel rotates to bring the desired character into position and is then struck to form an image on the paper.

Daisywheels come in several type founts that can be interchanged quickly to suit application needs. Typical printing speeds are 25 to 60 characters per second. Printing can be performed in either direction, paper can be fed up or down and the noise level is low. Daisywheel printers are noted for their high print quality and are often used with word processing systems.

The dot matrix printer is the most common type of serial printer in use. This is because of its speed, versatility and ruggedness. These qualities combined with low cost, make the matrix printer particularly attractive to the personal computer market. The print head comprises a matrix of tiny needles which hammers out characters in the form of patterns of tiny dots.

The shape of each character, i.e., the dot pattern, is obtained from information held electronically. Standard characters are produced in a 5 x 7 (5 pins wide and 7 pins high) dot matrix via a single print head (a device containing a matrix of needle like hammers) by energizing the appropriate dots (needles). The print head moves across the paper. The needles strike the paper through an inked ribbon.

Matrix printers are faster than daisywheel printers in the range 50 to 480 characters per second but in general the quality of print is inferior. Some higher (needle) density print heads (18 and 24 pin/needle) which can provide print quality roughly equal to that of a daisywheel printer though this is achieved at the expense of speed. 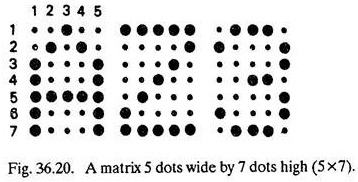 They are serial printers employing non-impact technique. Thermal printers have print heads that convert electricity to heat. Thus heated print elements (heated wires in the print head) create characters in dot matrix form on special heat-sensitive paper. There is no inked ribbon required since the images are created by heat.

Thermal printer technology permits a smaller dot size than is attainable with impact dot matrix devices and hence offers higher print resolution, typically 200 dots per inch (dpi). Thermal printers are generally used where the volume of output is small because the heat- sensitive paper is relatively expensive. Speed is low because the heated wires of the print head must cool before moving to the next position. Thermal matrix printers are very quiet. The creation of multiple copies is not possible.

The ink jet printer is another non-impact type. Ink droplets are squirted onto paper from nozzles to form characters using the dot matrix principle. The nozzles shoot stream of charged ink towards the paper. Before reaching it, the ink passes through an electrical field that arranges the charged ink particles into characters. Plain paper can be used and the print operation is very quiet.

Although reasonably fast, they are relatively expensive. The range of devices is wide and the technology continues to improve. At the top of range there are machines capable of generating colour images of near photographic quality with resolution approaching 300 dpi, operable in letter qualify or draft mode. These printers can print 200 characters per second.

They also facilitate multiple copies with pin feed for paper movement. Line printers of chain, train and belt type use several complete sets of type which move horizontally past the print line, and are separated from the paper by an inked ribbon. In the case of chain printer (Fig. 36.21), the type characters literally form a chain, like links of a bicycle chain. 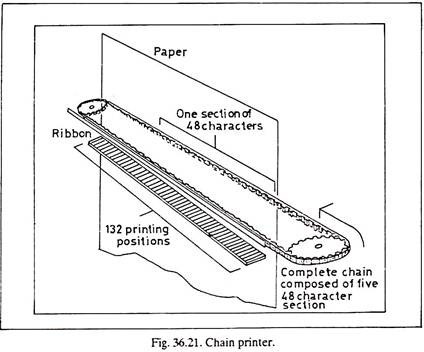 The train printer is very similar to chain printer except that the type characters are not permanently joined together but can be individually attached to or removed from the train carrier. Hence the character set can be varied very easily. The belt printer has a series of slim metal uprights that are secured to a horizontal rotating belt, the type character being on the top of the upright. Depending upon the particular printing mechanism, chain, train and belt printers may be character printers or line printers.

The drum or barrel printer has complete character sets wrapped ground the circumference of the barrel at every print position. If the printer is a 132- character width printer then there are 132 complete sets of type wrapped round the barrel. There are also 132 hammers, one for each print position, with the inked ribbon and print paper sandwiched between the hammers and the barrel.

As the barrel revolves and brings a particular character in line with the paper in every print position, the hammer(s) corresponding to that position in which the character is required strikes the paper. Consequently in one complete revolution of the barrel, all the characters will have passed the paper, and the complete line will have been printed.

Commercial applications of the line printer include the production of tabulated information, invoices, payroll records and stock records etc., while scientific and technical applications give mathematical and similar print-out.

Laser printer is sometimes referred to as a page or document printer. Using a combination of laser and photocopier technology, these printers are capable of converting computer output into print, page by page. Laser printers produce very high quality images (graphics and text), generally offer a wide selection of character fonts (typically ten or more), are very quiet and operate very quickly. They are, however, costly. Laser printers can print from 8 to 300 pages per minute and a print resolution of 300 dpi is standard. 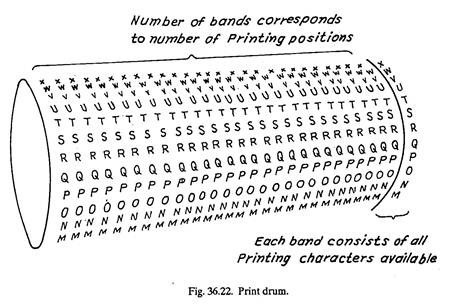 Visual display devices were developed as an alternative to printing devices for situations in which it is not essential to have a printed copy. Their chief advantages are that they are virtually silent, and can, if desired, display information at far greater speeds than any printing device. The visual display device is essentially like a small television screen and displays information in a very similar manner to that of a TV set.

The VDU is a type of terminal, with a keyboard for manual input of characters to the computer and a screen for character display of the input or output. The screen displays information to enable a visual check before the input is transferred to the computer. The VDU is extensively used for keyboard entry of data (Fig. 36.15).

The most common display method is to generate characters from a dot matrix. A selected pattern of dots is illuminated to form a character (Fig. 36.20). Initially used in situations where information is required quickly, for example in airline seat reservations where speed is the essence in handling customer enquiries, VDUs are now widely used for general data entry and retrieval of stored information.

Some VDUs are equipped with touch sensitive screens which allow data to be input by touching the screen with the finger tip. Fig. 36.15 shows a typical Visual Display Unit.

Plotters are devices that output line drawings on paper. These are slow compared with other forms of output, but the compensation is a very high degree of accuracy. In plotting, accuracy is more important than speed. Plotters consist of a pen which can either be touching the paper or lifted off it. It can be moved a short distance (e.g., 1 mm) either horizontally or vertically or, by moving both horizontally and vertically at the same time, generate a line at 45 degrees.

Plotter is able to produce bar charts, line graphs, engineering drawings, maps and many other two-or even three-dimensional illustrations, all fully annotated. The most common type of plotter is flat bed type. This plotter is by far the most simple: the paper is fixed in position on a flat surface, and the pens move on X-Y axis to draw the illustrations. The most significant advantage of the flat-bed plotter is the variety of media that can be used.

The user can make drawings on vellum, acetate, or sheets of paper. In drum plotter the (plotting) paper (one end of which is wrapped round a drum) is fed round a drum which revolves in both directions (back and forth). The pen turret is suspended from a bar above the drum and moves only in a horizontal direction-left to right or right to left. Thus the paper and pen move relative to each other in X and Y directions. Generally, drum plotters use a roller, and, therefore, require a specific sprocket or some kind of feed mechanism.

In a drum plotter, media size limitation is eliminated. Paper moves in a continuous output to produce a constant flow, which in turn produces larger graphics. A third type of the plotter is the pinch roller plotter. This actually is a hybrid of the flat-bed and drum plotters. It has a motor that drives the bed along the X-axis and a pen mount that moves along the Y-axis. Different companies manufacture this X-Y plotter with either a dc servo motor or a stepper motor.

One feature that has been developed in some plotters is an electromagnetic or mechanical- magnetic pen pick-up. This permits clean, trouble-free pen pick-up compared to conventional mechanical pick-ups which can be a source of difficulty at times. A significant difference in plotters is the number of pens and pen (colour) choices they offer. Plotters are available that change pens automatically and on command. This permits the easy plotting of multi-colour drawings, charts or graphs. 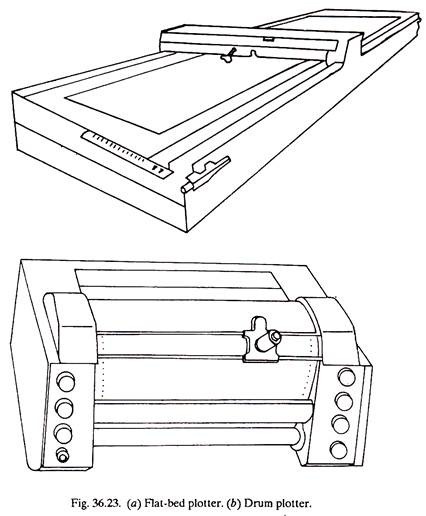 COM units reproduce the drawings on microfilm rather than as normal size engineering drawings made on a plotter. Although microfilm media for data storage are available in several forms, the most common is called microfiche. Microfiche is a small card of microfilm with many small images as a grid pattern.

Usually the output from the computer is written to magnetic tape. A special machine reads the tape and transfers the data to microfiche. Subsequently microfiche can be inserted into a simple reader which enlarges the image and projects it on to a screen for the user to read. It can also be duplicated, and the multiple hard copies can be printed from it if required.

1. Speed of output is many times faster than high speed line printers.

1. COM unit is an expensive piece of equipment.

2. User cannot write notes on the microfilm, as it is possible with a paper copy.

4. Enlargements of the microfilm onto paper, although adequate, are not of as high quality as the output from a pen plotter.

The computer can be used to trigger verbal communications via an audio response unit and this could be an appropriate method to use if standard replies to requests for information are all that are required. Computer audio output or voice response units speak by arranging half-second records of voice sounds (phonemes) or pre-recorded words.

Often they will be coupled with touch-tone terminals for data entry. Since only a limited vocabulary is available, they are used mainly in the banking industry to report customer account balances or in supermarkets to notify customers of the amount of each purchase.