This article throws light upon the five main processes of communication. The processes are: 1. Sender 2. Transmission 3. Noise 4. Receiver 5. Feedback. 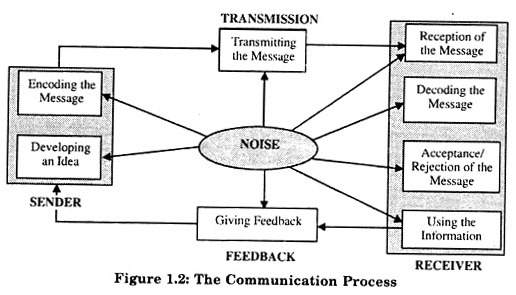 Communication starts with the sender, who is the initiator of the message. After generating an idea, the sender encodes it in a way that can be comprehended by the receiver. Encoding refers to the process by which the sender translates his thoughts into a series of verbal and non-verbal actions that he feels will communicate the message to the intended receiver. For example, translating the thought into any language.

The choice of a channel depends on the communication situation. For instance, when dealing with confidential information, direct face-to-face interaction or a sealed letter are more effective channels than a telephone conversation.

Noise is anything that has a disturbing influence on the message. Since noise hinders communication, the sender should choose a channel that is free from noise. Noise may occur at the sender’s end, during transmission, or at the receiver’s end.

Examples of noise include:

i. Ambiguous symbols that lead to faulty encoding

iv. Faulty decoding (attaching the wrong meaning to the message)

v. Prejudices obstructing the poor understanding of a message

vi. Gestures and postures that may distort the message

The receiver is the person to whom the message is transmitted. In order to decode the message, the receiver has to be ready to receive the message. That is. the receiver should not be preoccupied with other thoughts that might cause him to pay insufficient attention to the message. Decoding refers to the process of translation of symbols encoded by the sender into ideas that can be understood.

A message generated by the receiver in response to the sender’s original message is known as feedback. Feedback is necessary to ensure that the message has been effectively encoded, transmitted, decoded and understood.

It helps a sender evaluate the effectiveness of his message, so that he can modify his subsequent messages. Feedback also confirms whether there has been any change in the behavior of the individual or in the organization as a result of communication.

The communication model discussed above provides the basic framework of the communication process, identifies the key elements (sender, transmission, receiver, noise and feedback), and shows their relationships. This framework helps managers pinpoint communication.