Wage incentive plans reward an employee for his good job-performance.

The various aspects of job-performance are:

(iii) Utilisation of materials, plant, tools and services; and

Almost all commonly employed Wage Incentive Schemes guarantee a minimum (base) wage plus incentive based upon operator’s performance, if it exceeds a plant-wide standard. Normally the wage incentive plans should depend on the standards set by Work Measurement, The Wage Rate may be the result of mutual agreement between employer and employee or formal/informal evaluation of the employee.

Until now, about twenty-five major Wage Incentive Plans have been analyzed. A few of them which are considered to be the basic and representative.

The requirements of a sound wage incentive plan are:

(a) It should be simple, easy to understand and to operate. It should involve least clerical work.

(b) It would be well planned and guarantee a minimum wage.

(c) A worker should be rewarded in proportion to his efforts and achievements. Reward should be promptly paid.

(d) A worker should get enough and adequate incentive for his contributions.

(e) The scheme should preferably be based on Time-study data.

(f) It should give incentive both for quantity and quality of production.

(g) Standards should be fairly set.

(h) The scheme should be Just for workers as well as for the management.

(i) Standards and hence the allowed time (to the worker) should be altered only when there is a change in the work method.

(j) Standardization should preferably be the basis for all incentive scheme. Work methods, materials, work place, working conditions, etc., all should be standardized.

(k) Worker should not suffer in his incentive (i.e., earnings) for reasons (like faulty material, improper tools, etc.) beyond his control.

(l) No limit should be put on a worker’s incentive earnings.

(m) The plan should be installed with the consent of the employees.

(n) Once installed, the incentive scheme should be rigidly maintained.

(1) The incentive scheme should be profitable to both workers and management.

(2) It should help increasing production and thereby lower the related costs.

(3) It should reward workers in proportion to their output, and thus high up their morale.

(4) The characteristics of an incentive scheme should be such that an able worker is in a position to earn sufficient amount of money to raise his standard of living.

(5) An incentive scheme should provide recognition to a worker for his good contribution.

(6) An incentive scheme should aid improvement in the utilization of equipment, materials and services.

(7) An incentive scheme should furnish a basis for cost control and labour control.

(8) An incentive scheme should help in reducing labour turnover and absentee rate.

(9) An incentive scheme should aim at improving relations between workers and management.

The following different Wage Incentive Plans for Direct Workers will be discussed here:

In the straight piece rate system, a worker is paid straight for the number of pieces which he produces per day.

Earning of a worker = No. of pieces (i.e., units) produced x Rate per piece.

In other words, if a worker brazes 16 heat exchangers per day and for each heat exchanger the wage rate is Rs. 5 then he earns at the rate of Rs. 80 per day. (8 hours).

The wage rate per piece to be paid to worker is decided as follows:

(i) Through any appropriate work measurement technique determine the standard time required to braze one heat exchanger. Suppose it comes out to be 30 minutes. It means in a working day (i.e., 8 hours) a worker should be able to braze 16 heat exchangers.

(i) The method is very simple, easy to understand and to operate.

(ii) A worker’s earnings are solely based upon his contribution towards production and it appears to be a good incentive for him.

(iv) It is easy to estimate labour cost.

(i) With a motive to produce more (and thus to earn more) the workers may not pay proper attention towards:

(a) Maintaining the required product quality,

(b) Effective utilization of materials, equipment and tools, etc.

(ii) The method does not assure job security.

(iii) A worker may suffer badly as regards his earnings owing to the enforced idleness if any, (e.g., lack of material, instructions, power or proper tools, etc.)

(iv) A worker is not guaranteed minimum wage.

(v) With a desire to earn more and excel others, a worker may spoil his relations with his co-workers.

Because of these disadvantages the method is not much used in industries today.

This type of wage incentive scheme is very suitable where:

(ii) A job can be distinctly identified and the output can be measured; and

2. Straight Piece Rate with a Guaranteed Base Wage:

This method is an improvement over the straight piece rate system as it guarantees a minimum (hourly or daily) base wage. Suppose the standard of output set by the management is 16 pieces per day. If a worker produces less than this amount he still gets the minimum guaranteed wage and if another worker exceeds this standard, he is given a wage in direct proportion to the number of pieces produced by him at the straight piece rate.

The following illustration will explain this method:

i. An output standard of 16 pieces per day.

iii. 8 working hours in a day.

(i) The system provides a guaranteed minimum wage.

(ii) By guaranteeing a minimum wage, this system automatically takes some care of the enforced idleness beyond the control of the workers.

Like the straight piece rate system, this system is also becoming obsolete.

This system as suggested by F. W. Taylor had the disadvantage that the inferior or fresh workers, who were unable to reach output standard, could earn very little and hardly survive. 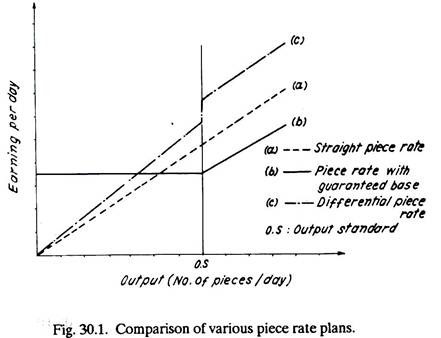 Merrick modified the Taylor’s plan and introduced Merrick Differential piece Rate System. This plan assured a minimum wage to the workers and suggested separate differential piece rates (in an increasing order) for workers reaching up to 70%, 100%, 120% of the output standards and above (refer Fig. 30.2). 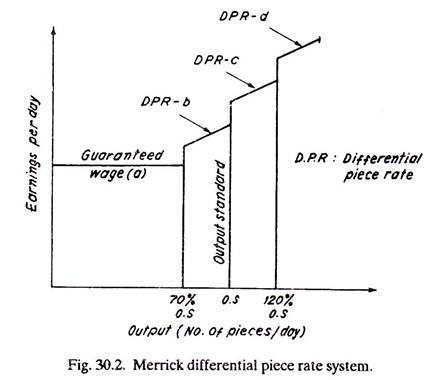 This system, though improved Taylor’s plan could not become popular because of its complex nature of wage calculations.

(i) A minimum base wage is guaranteed.

(ii) An additional bonus is given to a worker who exceeds output standard (in a given time). He normally gets a percentage of the total bonus for the saved time. A very common percentage is 50-50, i.e., 50% of the bonus (on the saved time) is given to the worker and the rest (50%) is enjoyed by management.

(iii) Output standards are based upon previous production records available.

Wage of a worker is given by

(i) It guarantees minimum wage.

(ii) It is simple to understand and to operate.

(iii) It does not consume time on expensive time studies.

(i) Workers do not like that management should share the bonus on the time saved solely because of their efforts.

(ii) Output standards being based upon past production records (and not on time study) may not be accurate and fair or just to all workers.

(i) Like Halsey plan provides a minimum guaranteed base wage;

(ii) Like Halsey plan relies upon output standards based upon past production records; and

(iii) Unlike Halsey plan gives a bonus on

(a) Since Rowan plan gives a bonus on (S – T)/S value, it can be employed even if the output standard (as based upon the past production records) is not very accurate.

(b) It provides a guarantee of minimum wage.

(c) Inferior and fresh workers are not penalised.

(a) It is not easy to understand and to operate.

(i) A guaranteed wage is provided; 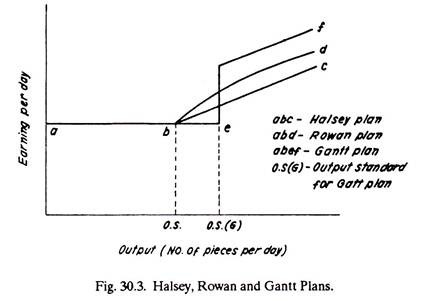 Gantt plan is an improvement over the Taylor’s differential piece rate system.

i. Like other incentive wage schemes a minimum base wage is guaranteed.

ii. ‘B’ represents unit of work. 1B stands for 1 standard work minute and it includes working time as well as time for rest. A worker earning “60B’s” per hour reaches 100% of the standard output or 100% efficiency.

(i) A base wage is guaranteed, 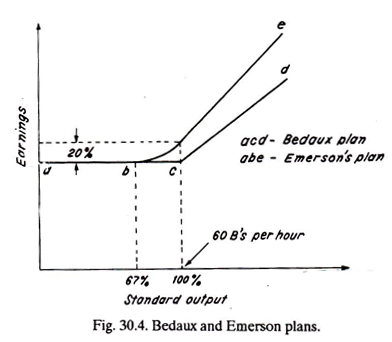 (a) The output or effective contribution of each worker cannot be accurately measured. For example: a number of workers unloading freight cars,

(b) The output of a worker can of course be measured but it is related with the output of others as in (flow) production of motor-cycles or air-conditioners,

(c) All the workers in a group are equally skilled.

The Principle of a group incentive plan can be:

(i) Evaluate the collective performance of the group,

(iii) Divide the earnings in equal or any other proportion amongst the workers-depending upon the qualities (output, skill, etc.) possessed by each worker. The group leader may be given a bigger share because he is responsible for the successful completion of the job. The division of earnings, if carried out unwisely and without proper thought, may deteriorate team spirit, spoil the job and create conflicts and resentment amongst the workers.

(i) A team spirit builds up amongst the workers.

(ii) Less skilled workers learn from the skilled ones.

(iii) The amount of supervision required is less.

(v) Group plans are simpler and less expensive than the incentive plans employed for individual workers.

(i) In case the total earnings are equally divided amongst all the workers in a group; a slow worker gets the same money as a speedy worker and this creates dissatisfaction amongst the skilled workers and may add to labour turnover.

(ii) Unequal division of earnings amongst the workers may give rise to conflicts amongst them.

(iii) It may be difficult to achieve rapid increase in production.

(iv) Production rate of slow workers in the line may limit the production capacity of the speedy workers.

(v) Group incentive plans do not work well if the group size is large.

(i) In mass and continuous production industries (chemical, petrol, etc.).

(ii) Riveting of bridges, and

(iii) In the manufacture of electronic equipment.

(i) An incentive scheme involves extra cost of:

(b) Installing and maintaining (the incentive plan), and

(ii) An improperly structured and planned incentive scheme can be a root of all troubles and disputes between the labour and management.