After reading this article you will learn about:- 1. Meaning of Work Sampling 2. Objectives of Work Sampling 3. Theory 4. Procedure 5. Determination of Time Standards 6. Applications 7. Advantages 8. Disadvantages 9. Errors.

Work sampling, also called ‘Activity Sampling’ or ‘Ratio Delay Study’, is based on the statis­tical method first devised by L.H.S. Tippet in 1934. He used this technique firstly, in the British textile industry. Later Morrow carried out several investigations.

The results obtained by the all-day stop-watch time study and such other statistical methods were in most cases found to be in close agreement with the work sampling method, which places it on a sound reliable basis.

Though stop-watch time study proved to be very useful for repetitive operations but it cannot measure accurately and economically long and irregular work cycles. While most of the indirect activities are of irregular nature and, therefore, there must be some way to control the indirect labour activities. For such tasks work sampling has been well established and gained lot of popularity.

Workers have wrong concept that the results of a time study may go against them and reduce their wage rates. Therefore, they oppose the stop-watch method. For this technique, workers have no such feelings.

Work sampling is a fact finding tool and has the following two main objectives:

1. To measure activities and delays while a man is working and percentage of that he is not working. It means a fair day’s work.

2. Under certain circumstances, to measure manual tasks that is to establish time stan­dards for an operation.

In this method, error is likely to occur but the error tends to diminish as the number of samples increases.

For example, in the following table, there are 36 working observations and four idle obser­vations, i.e. a total of 40 observations.

It is important to decide, as to what level of confi­dence is desired in the final “Work Sampling” results. The most common confidence level is 95%. The area under the curve at 2 sigma or two standard deviations is 95.45%, which is rounded off to 95%. This means that the prob­ability is that 95% of the time the random observations will represent the facts and 5% of the time they will not.

For many cases, an accuracy of + 5% is considered satisfactory. This is sometimes referred as the standard error in percentage. 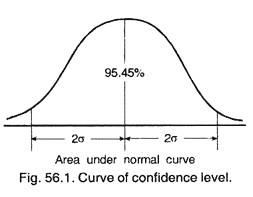 To get a desired accuracy, an analyst must take sufficient number of observations.

For calculating the number of observations required for achieving the desired accuracy, following formula is used:

Determine the percentage of idle time of an automatic screw cutting machine by Work Sampling. Assume that a confidence level of 95% and an accuracy of ±5% have been con­sidered. Determine how many random observations will be required to give the desired results.

In this example, it is necessary to estimate the value of P first. It means a trial study would be made to get a first estimate about the percentage of the idle time.

The standard formula is

After the work study is in progress and 500 observations have been taken, a new calculation is to be made in order to recheck the value for N.

Suppose the results were as under:

It is advisable to recalculate N at regular intervals, perhaps at the end of each day, in order to better evaluate the progress of the work study.

2. Determination of “Accuracy” for a Given Number of Observations:

When the study is over, a calculation is made to find whether the results are within the desired accuracy or not. This can be done by substituting N in the equation 1.

Assume that the final results of the study at Ex. 1 are:

As ± 4.3% is below + 5% required accuracy, the number of observations are sufficient.

The following steps are involved in making a “Work Sampling” study:

(a) State the main objectives or purpose of the problem.

(b) Describe the details of each element to be measured.

2. Obtain the approval of the incharge of the department in which study is to be made. Obtain the co-operation of the operators to be studied and they should also under­stand the purpose of study.

3. Determine the desired accuracy of the final results in the form of standard error or percentage.

5. Make a preliminary estimate of the percentage occurrence of the activity or delay to be measured for one day or two days. This may be estimated on the basis of past experience.

Determine the number of:

(i) Observations to be made.

(iii) Days or shifts needed for the study.

(b) Make plans for taking the observations such as time for taking and the route to be followed by the observer.

7. Make the observations and record the data.

8. Summarize the data at the end of the each day.

9. Check the accuracy or precision of the data at the end of the study.

10. Prepare the report and state results. If required make recommendations.

For example, suppose Mohan Singh worked as a Drillman, and a work sampling study showed that he was idle 15% of the day or 72 minutes and that he worked the remainder of the day of 480 minutes at an average performance index of 110%. He drilled 400 items of acceptable quality during the day.

The standard time for the operation he performed can be calculated as shown below:

It is assumed that 15% of the total time is taken as fatigue and other personnel allowances.

1. Work sampling can be applied for the estimation of the percentage utilization of machine tools, cranes, fork trucks etc.

2. Work sampling can also be used to estimate the unavoidable delay times for deciding the delay allowances.

4. Work sampling is also used to find out time standards, specially where the job is not repetitive and where time study by stop-watch method is not possible, e.g. for maintenance work, office work, repair work, ship building etc. Time standards can be calcu­lated by combining rating with work sampling as illustrated in the following ex­ample:

A work sampling study showed that 20% of a work week of 48 hours was con­sumed by avoidable, delays. If each time a work sampling observation was made the operator was rated and the average of such rating was 110%. If 100 units were produced by the operator in that period, calculate standard time.

1. Operator is not subjected to long-period of observations.

2. Group operations can be easily studied by a single analyst.

3. It does not require continuous observation for a long period of time.

5. Observations may be taken over a period of days or weeks, thus decreasing the chance of day to day or week to week variations affecting the results.

6. The man hours spent by the analyst are much less.

7. A work sampling study can be stopped at any time without affecting the results.

9. This produces less fatigue and are less tedious to observer.

10. It generally requires less time in calculating the results.

11. No stop-watch or any other timing device is needed.

1. It is not economical to study a single operator or machine or for studying operators or machines located over wide areas.

2. It does not permit finer breakdown of activities and delays.

3. Study made of a group presents average while there is no information about the magnitude of individual differences.

4. Management and workers may not be able to understand work sampling as easily as they do time study.

5. Some-time no record is kept about the study on the operator, therefore, a new study must be made when a change occurs in any element.

While conducting the Work Sampling Study some errors are likely to be occurred. There­fore, care must be taken to avoid these errors.

Following are some of the errors which generally occur:

2. Bias in work sampling, and

In sampling study, whole population is represented by a sample. If the size of the sample is small, then there are chances of errors in inference drawn from this sample. Therefore, while conducting the study care must be taken that sample size must represent the same character­istics as that of the whole population.

The sample size can be calculated using the formulae, after a confidence level and level of accuracy is decided. After completing the study, it must be checked, whether sufficient number of observations have been taken or not.

As a consequence of bias in study, the proportion of an activity (working or idle) shall be different from the actual proportion of time devoted to that activity.

Following are the main sources of bias study:

(i) A Non-Random Schedule of Observation:

To avoid this error, randomised sampling procedure must be adopted. Before starting the study, actual schedule of observations must be designed.

Then this number is distributed randomly over the day. For this purpose any random number table may be used.

For example, following numbers are taken from the random number table:

Then using these numbers, we can fix the schedule as:

These times are then chronologically arranged to complete the observation schedule.

As a second way, these numbers can also be used to indicate as (leaving last number).

(ii) Rias on the Part of the Observer:

Sometimes when the observer observes the worker he is in transitional states, i.e. he is changing from one state to another state, and then the observer can call it either way. In such cases, the observer’s judgment is required.

To avoid any possibil­ity of bias, following precautions must be taken to minimise the judgments:

(a) Categories must be defined very clearly.

(b) Clearly define the instant at which the observation is to be made. For this purpose, a turn of the corner is preferred so that the category at the time of first seeing can be noted.

(c) If any transitional stage cannot be defined clearly, even then judgment is avoided and tossing of coin must be done.

(iii) Change in the Behaviour of the Worker:

Sometime when the observed person knows that he is being observed then he changes his behaviour.

To take care of this error, following precautions must be taken:

(a) Observations must be randomly spaced.

(b) Observations must be taken as soon as the operator is in sight of the observer.

(c) Randomise the order in which individual worker is observed, when more workers are to be observed.

Non-representativeness exists when the period studied do not give characteristics of the circumstances that prevail in the long run. For example, results taken on any one day cannot represent all the days. On Monday the worker is fresh while on Friday and Saturday he will be tired.

Therefore, designer of a work sampling study must give a careful attention to representativeness of the sample. Periods of abnormal activities and unusual conditions should be avoided.