After reading this article you will learn about the compatibility of individual objectives to organisational objectives.

For example, the objectives of scientist in Atomic Energy Department and the research laboratory are compatible. The scientist applies his knowledge and skill and enquiring mind while in return he gets research facilities and monetary rewards from the management. The management does not necessarily provide him with unlimited facilities or allow him to do whatever experiment he desires.

The scientist recognises the right of the management to assign projects that lead to the fulfillment of the organisations task. Scientist has the option of voic­ing objection and having those objections heard and he also has the option of striving to become a member of the group that determines priorities and assignments.

If his proposals are not approved, he will abide by organisational demands as long as he can continue to achieve his own objectives within the framework of the organisational objec­tives.

Fig. 4.1. shows how individual and organisational objectives can exist compatibly: 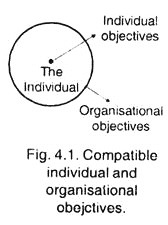 The individual objectives move in the same general direction as the objectives of the organisation.