Empirical research shows that MNC financing decisions are affected by several factors besides cost of capital. MNC affiliates’ capital structure is designed to accommodate the imperatives of tax planning, agency costs, host country political risk, the level of creditor rights protection, regulatory restrictions and capital market development in the host country. Additionally, as issuer requirements increase, there can also be a be a shift in preference—between 2002 and 2007, debt (especially overseas debt) became the preferred external mode of financing of sovereign and private sector Asian issuers.

Corporate tax rates vary among countries. When an MNC chooses debt as a financing source, it will prefer to raise it in a country where the tax rates are higher. Why? Because interest on debt is a tax deductible expense, and this reduces tax payable. Secondly, for a given pre-tax cost of debt, the post-tax cost of debt is lower in the country with the higher tax rate. MNC affiliates in countries such as Japan and Italy, with high corporate taxes are more highly geared than those in tax havens such as Bermuda and Barbados.

The tax shield on debt reduces tax liability, and increases post tax profitability. But this is an attraction only when the company has pre-tax profits. If it has pre-tax profits, any brought forward losses from the earlier years can be set off against profits so that its tax liability is zero. In such a case, the tax deductibility of interest on debt becomes irrelevant. So an MNC affiliate with carry forward losses may not select debt financing.

In countries that do not have laws that protect creditors’ rights, or where such laws exist but enforcement is poor, lenders face difficulties when principal is not repaid. Since non-performing assets are likely to be high, lenders build this into the cost of debt. So, interest rates on debt are likely to be higher, since default risk is factored into the price of the loan. The differential between the cost of debt and cost of equity narrows down, and borrowers are deterred from debt.

Tough laws and rigorous enforcement create a conducive climate in which lending and borrowing can take place. The World Bank publishes a ‘strength of legal rights’ index (SLRI), on a scale of 1 to 10. A rating of ‘1’ implies poorly designed and weak laws and a rating of ’10’ implies well designed, strong laws. In 2009 (the latest year for which SLRI was available), among the BRIC countries, India’s SLRI score was 8. China scored 6, and Brazil and Russia scored 3, Strong creditor protection laws and effective enforcement of laws provide incentives to lending. In countries with strong legal protection for creditors, MNC affiliates tend to use more debt in their capital structure.

An affiliate’s ability to raise debt in the host country depends on the availability and willingness of investors (institutional and retail) to subscribe to debt. Institutional investors are circumscribed by their internal investment guidelines that prevent them from investing in below investment grade debt. Many emerging markets have underdeveloped debt markets that run a poor second to equity markets, in terms of issue volumes, investor interest, trading and liquidity, the number of domestic institutional investors, and the absence of credit rating of debt instruments.

Even in India, more than 90% of corporate debt issues are privately placed, and retail trading of debt instruments is virtually non-existent. Asian countries continue their efforts to develop deep and wide debt markets. When the host country capital market in general and debt market in particular, is underdeveloped, the affiliate may have no choice but to choose equity over debt.

FDI ceilings vary between countries and within a country; they can vary from sector to sector, as well as over time. Some countries impose rules specifying that a certain percentage (say 40%) of the project cost must be raised by an MNC affiliate from local capital markets. FDI ceilings specify the maximum equity holding in local companies, and also the type of debt that forms part of FDI.

Countries may or may not include long-term loans, short-term loans, inter-affiliate loans, financial derivatives, bonds, money market instruments and trade credits in FDI. In a host country whose FDI ceiling excludes specific forms of long term debt, the affiliate may choose such debt to overcome the FDI ceiling.

Since interest is a tax-deductible expense, MNCs ask affiliates in countries with high tax rates to lend to affiliates in low tax locations. MNCs raise more debt in high tax countries so that these countries stand to lose tax revenues. To protect themselves against these practices, many countries impose restrictions on the capital structure choices of MNCs, so as to limit the interest paid on excess leverage. The restrictions are called thin capitalization rules (or earning stripping rules).

The rules take different forms – limit the maximum interest deduction on inter-affiliate debt, or deny tax deductibility on interest on an inter-affiliate loan if the debt-equity ratio exceeds a specified level. More and more countries are imposing such rules, as they come to understand the erosion in tax revenue caused by corporate actions. China introduced the thin capitalization rule under article 46 of its unified corporate income tax law (called Enterprise Income Tax Law of People’s Republic of China) which came into effect in January 2008. Brazil’s thin capitalization rule became law in June 2010.

Consider a case where a British company’s Indian affiliate has an initial funding requirement of Rs. 800 crores. Assume that its earnings before interest and taxes (EBIT) is Rs. 200 crores, pre-tax cost of debt is 10% and the corporate tax rate is 30%. As shown in Table 7.1, if India does not have a thin capitalization rule that restricts the debt-equity ratio, then the affiliate is free to choose the debt component say, 40%. But if a thin capitalization rule limits the debt-equity ratio to 0.2:1, the incremental tax revenues to the government are Rs. 4.80 crores (55.20 – 50.40). 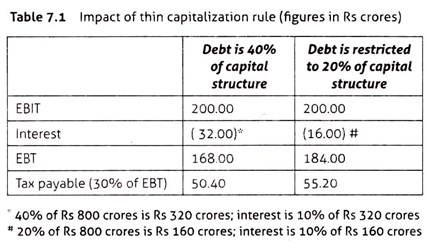 Exchange rate fluctuations cause uncertainty in future cash flows, and influence the effective cost of borrowing. Suppose the affiliate is located in a country whose currency consistently depreciated against the US dollar in 2011 and this trend is expected to continue. If the affiliate raises funds in 2012 by issuing three-year dollar denominated bonds, it will need more of the local currency at the time of repayment of principal, and for periodic interest payments.

When a company decides to borrow funds from overseas since it is cheaper to do so, it must take into account not only the cost of financing, but also the expected exchange rate in order to calculate the effective cost of borrowing overseas.

When if = cost of overseas borrowing

ef – the appreciation (or depreciation) of the foreign currency

The effective cost of the foreign borrowing is:

These are the costs that arise when there is a separation of ownership and control. In a corporate form of organization, the managers are agents the owners (equity shareholders) and lenders are the principals. The principals incur agency costs in order to ensure that the agent (management) acts in their interest. Lenders impose restrictions on management through ‘covenants’ that limit or prevent future borrowing by the company, and restrict the dividend that the company pays its equity shareholders.

Jenson and Meckling (1976) identified the agency costs of debt as bondholders’ monitoring costs, the opportunity wealth loss due to the effect of debt on the firm’s investment decisions, and bankruptcy costs.

Agency costs diminish the advantage of lower weighted average cost of capital that occurs through the higher use of debt. But the reduction in WACC is offset by debt covenants (the restrictions imposed by lenders on management), and the possibility that the firm will be unable to meet its current payments on its existing debt. The greater the leverage, the more restrictive are the debt covenants, and the larger are the agency costs. The larger the firm, the more difficult and expensive it is for lenders to monitor the firm, and the larger are the agency costs of debt. So, agency costs affect the selection of equity over debt.

They include preference for equity, earnings volatility, political risk, regulatory stringency, and market timing. Some firms prefer equity to debt. Preference is also affected by the consequence of selecting one over the other. Issue of additional equity dilutes earnings per share, while issue of debt can result in trading on equity, and an increase in shareholder value.

Issue of additional debt increases the risk of bankruptcy, especially for firms with earnings volatility. Companies choose to diversify across countries for several reasons—supply chain imperatives, demand driven considerations, to gain the first mover advantage, imitation of competitors’ presence in multiple markets, to achieve economies of scale, to leverage non-transferable management skills, and to reduce overall business risk by balancing of markets in different stages of the business cycle.

But research shows that international diversification does not appear to reduce volatility of earnings. The foreign operations of large companies have consistently had lower average return on sales than their domestic operations. Since leverage increases financial risk, an MNC’s affiliate may prefer equity.

In a country with relatively high political risk, an MNC affiliate may prefer equity over debt. A sudden change in government policy can lead to expropriation of company assets, sudden cessation of revenues, or abrupt loss of markets. This does not auger well for debt, which comes with periodic cash out flows, irrespective of the availability or quantum of profits.

A well regulated financial market has norms for periodic reporting and corporate governance, regulatory efficiency and imposition of penalties. When disclosure norms for equity are draconian, the affiliate may prefer to raise debt.

This is a very important factor when making a capital market issue. When stock markets show an upward trend, there is a tendency for companies to take advantage by issuing equity. An MNC affiliate in a high growth country may well choose equity over debt.

An affiliate’s decision regarding the type of financing and proportion of debt and equity may be influenced by the desire to conform to the parent company’s capital structure.