During the last two decades, there has been phenomenal growth in the Indian Pharmaceuticals and Drugs industry. According to the latest figures there are more than 16000 units in India manufacturing and formulating various drugs and pharmaceutical products as against only 2257 licensed drug manufacturers in 1970.

This phenomenal growth has created problems of environmental protection from various emissions and discharges from these industries. To deal with the wastes generated from the manufacturing and formulation of various pharmaceutical products and the treatment technology currently practised or available in this country is a major challenge.

The production process involved in this industry can be divided into two categories:

(i) Manufacture of basic drug.

A majority of the pharmaceutical industries in India are formulation units, whereas the multinational units and some of the large-scale units in public sector have both manufacturing and formulating facilities in the same complex.

However, the industry is so large and the products are so diversified that it is beyond the scope report of this article to describe manufacturing processes for individual drugs.

Classification of Manufacturing Processes for Drugs:

The manufacturing processes are broadly classified and described as follows: 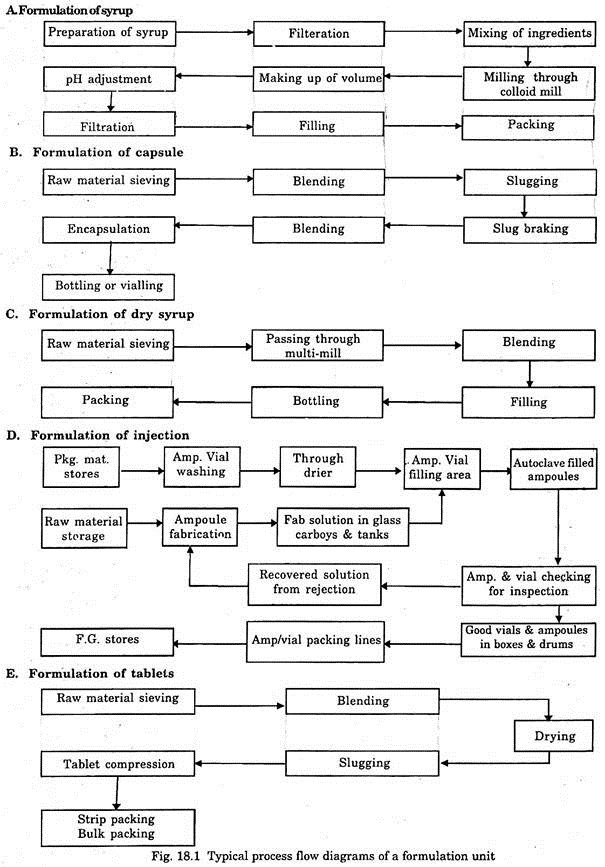 Sometimes the extraction is done by mechanical force like maceration, centrifugation, fractional or pressure percolation etc. The flow diagram for extraction of naturally occurring enzyme or hormone from chopped animal or vegetable matters is depicted in Fig. 18.2. 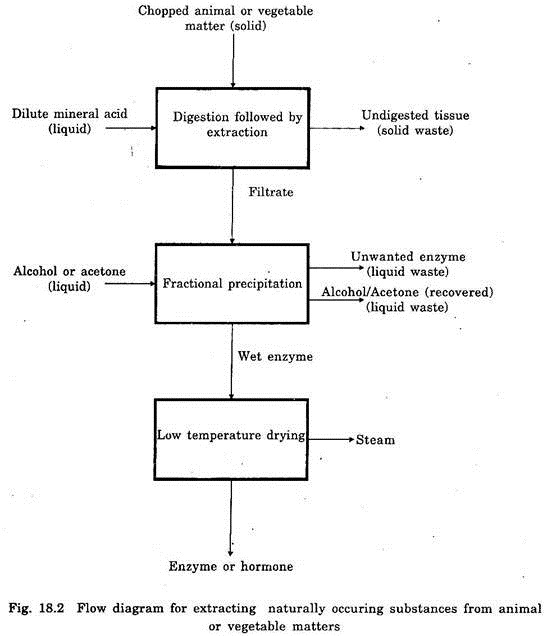 Fermentation is a bio-chemical reaction within a reactor in the presence of selected active microbes or enzymes. Reactions are carried out under mild chemical and physical conditions. Various drugs like antibiotics, enzymes, hormones, Vit. B12, vaccines etc. are manufactured by the process of fermentation.

These are described in the following sections:

The following steps are involved in a typical fermentation process:

(i) Selection of proper microbial strain.

(ii) Isolation of the strain in a pure culture.

(iii) Inoculation and germination in a fairly complex nutrient medium.

(v) Separation of the mycellium from the fermentation broth.

(vi) Recovery and purification of the final product from fermentation broth.

(vii) Style and finishing of the final product.

Raw materials like sugar, starch, corn steep liquor, soyabean meals, fish or whale solubles etc. are used as raw materials. Vitamins and minerals are used as growth factors. The end products are often less than 10% of the total preparation.

After separation of the mycellium, the final product is recovered by various techniques like adsorption, filtration, precipitation, ion-exchange, concentration, decolourisation, vacuum drying etc. The typical flow diagram for streptomycin production and its recovery and purification from the fermentation broth is given in Fig. 18.3. 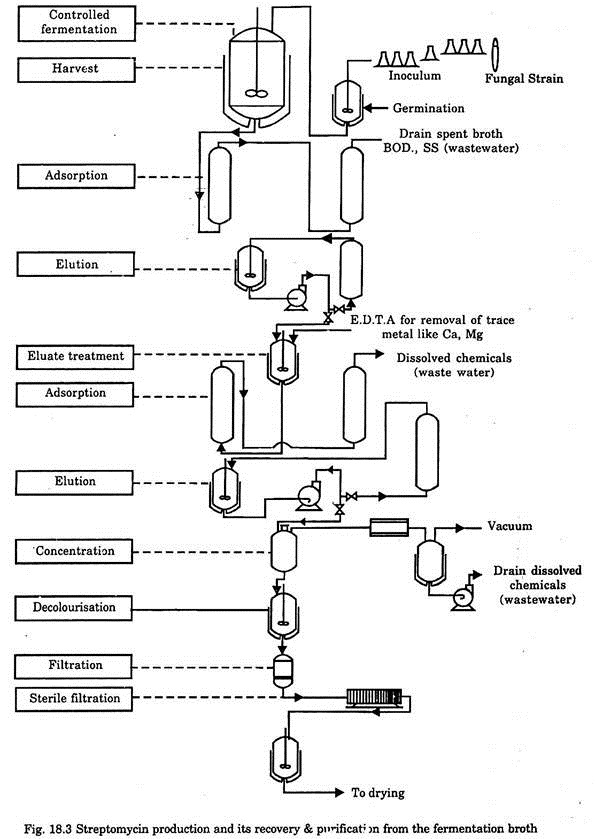 (i) Antigen or toxin— A special strain of pathogenic bacteria is developed under optimal conditions in a medium containing animal extract. The bulk of the organism is separated by millipore filters. The filtrate is sterilised with the help of some fibrous pads or ceramic candles and used as vaccines.

(ii) Toxoid Antitoxin Flocculates (TAF) — Toxoids and antitoxins are mixed in proper ratio and allowed to react for three weeks. Then the floccules having antigenic activity are separated, washed with uncontaminated saline containing bactericide.

(iii) Alum Precipitated Toxoids (APT) — High grade toxoids are treated with charcoal to remove colour and impurities. Then it is filtered and precipitated with alum and adsorbed with mineral carriers. The precipitate is washed and suspended in saline with some bactericide.

(iv) Purified Toxoid Aluminium Phosphate (PTAP) — PTAP is purer than APT. It is prepared by using semi-synthetic medium and complicated purification process. Magnesium hydroxide is used for precipitation of colour and removal of impurities.

Ammonium sulphate or cadmium chloride is used as protein precipitant. The other steps in manufacture are similar to that of APT.

Bacteria in the suspension may be either killed or living. Selected strains are grown under controlled conditions into solid or liquid medium for one to three days.

The cells are washed with sterile saline followed by centrifugation and re-suspension in saline. For living bacterial suspension, sterilisation step is excluded and certain nutrients are added in the medium.

The organism in which viral culture are grown may be in the form of living animals, fertile eggs or tissue culture. The examples of such living animals are rabbit, rodent, cow, sheep etc.

The common vaccines prepared by this method are for typhus, smallpox, cow-pox, yellow fever, measles, poliomyelitis etc. The method of preparations are similar to suspended or fixed cell culture by adding complex ingredients and growth factors in controlled conditions.

Ricketsial are small bacteria which grow and multiply in living cells. The commonly used typhus vaccine is usually grown in the yolk sac of fertile eggs. After the embryos have died or become moribund, the heavily infected yolk sacs are ground to remove the ricketsiae.

The ground material is suspended in an isotonic solution with 0.2 to 0.5% formaldehyde to kill the organisms. At appropriate stage, the preparation contains 10-15% of yolk sac and treated with ether or trichlorotrifluoroethane. The aqueous phase is separated and used as vaccine.

The organism is grown in a synthetic medium. The culture is filtered through paper pulp and then subjected to ultra-filtration to remove glycerin and mineral salts.

Then precipitated by adding (NH4)2 SO4 or CCl3CO2H, and the precipitate is separated, purified and used as freeze dried powder.

Blood serum from horse or goat is refrigerated to settle the cells and clotted by adding CaCl2 and the clot is separated by filtration. The serum is further purified by either fractional precipitation or proteolytic digestion.

Finally, it is adjusted for isotonicity with blood plasma and preservatives are added. In fractional precipitation method it is passed through pyrogen removing and sterilising filters. In proteolytic digestion method it is dialised and precipitated by adding inorganic salts. The filtrate is dialised and adjusted to isotonicity. Then it is preserved as in earlier method.

A wide range of chemicals are used in different processes for production and purification of various drugs. The process flow diagram for synthesis of oxyphenonium bromide is given in Fig. 18.4 as a representative one. 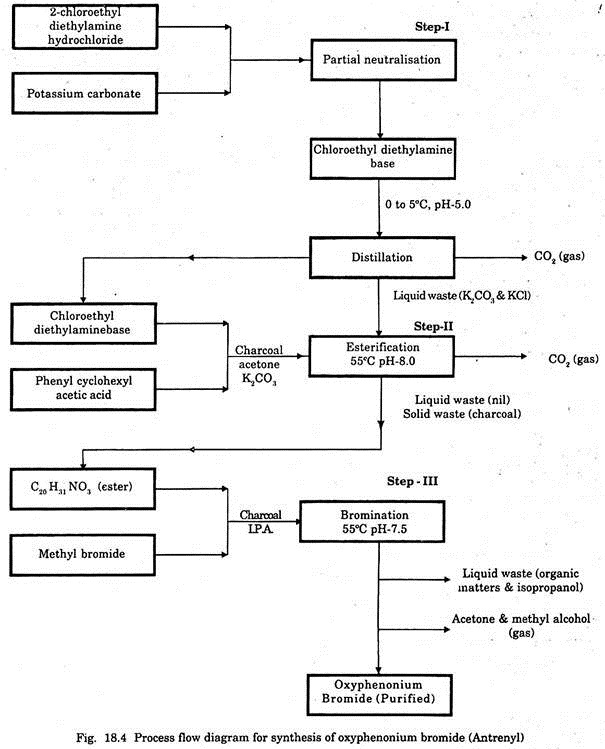